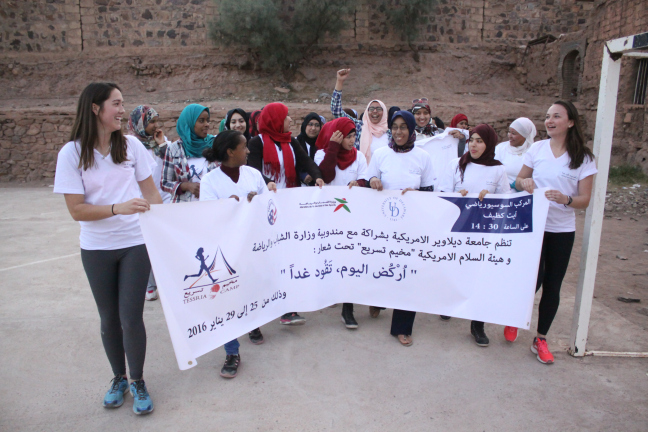 Curtesy of Tessria Camp/THE REVIEW
After studying abroad in Morocco, two students decided to hold a running camp in the country where it’s rare to see women exercising in the public sphere.

It’s not common to see people—especially women—running and exercising in Morocco.

This cultural difference inspired two members of the club cross country and track and field teams to lead a five-day women’s health and exercise program after their study abroad trip to Ouarzazate, Morocco during winter 2015.

Seniors Elizabeth Clinton and her teammate, Nora Reynolds, had to keep up with their training while abroad. On their runs they reflected a lot on their own experiences running in a country where it wasn’t common to see women exercising in public. Clinton said the idea inspired her thesis about women’s participation in sports, but she said, “we also wanted to do something concrete—not just research about it but do something about it.”

Clinton and Reynolds applied for grants to return to Morocco to initiate the project. Between grants and some crowdfunding they were able to lead an exercise and leadership program for women called Tessria Camp, which they held this January.

They reached out to an organization, the Ministry of Youth and Sport, to help find a community in need of something like this. They heard back from a couple of the Peace Corps volunteers in Ouarzazate, Morocco, a small, conservative town on the edge of the Sahara, who said some of the women they had worked with expressed an interest in exercising.

“That was kind of a perfect fit for us,” Clinton said.

Their camp had 20 participants ages 18-30, none of whom spoke any English. Clinton and Reynolds had taken some Arabic classes, but because it differed from the colloquial dialect of the participants, the pair had help from students from the local university who assisted with translating.

In general, Moroccan women aren’t out in the public sphere as much as American women. Clinton said women are seen in public—it’s not frowned upon—but for the most part they are at home and men are on the streets.

For planning purposes, they returned to Morocco for the second time this August to do some baseline research and interviews for the five-day camp which focused programming on running and associated tasks like goal setting, team building and sexual harassment. They also set out to build confidence in the women and provide women’s health education, a limited resource in Morocco.

Clinton said many of the women they worked with had no experience with women’s health exams. She said the women knew they were in need of health education and were interested, which led to meaningful conversations despite Clinton’s initial fear that the dialogue about these sensitive topics would be awkward. Clinton said Moroccan women have these conversations with each other, but it is not something they talk about much, instead trying to

Clinton said sexual harassment was one of the main factors as to why women didn’t feel comfortable running outside.

“When we run—even around Delaware—we get catcalled, but in Morocco it’s crazy,” Clinton said. “There’s a lot of unemployment, so there are men who sit at coffee shops all day because they don’t have jobs and when you’re walking or running it’s pretty much constant.”

Women wear hijabs, and Clinton said she had originally thought the clothing would be a deterrent. However, Clinton said the women were insistent that wearing hijab was their choice, and it didn’t stop them. Clinton found it inspiring that one woman wanted to make hijab outfits for women who want to participate in sports.

“Honestly, it was more successful than I thought it would be,” Clinton said.