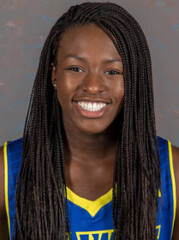 Courtesy of Mark Campell/THE REVIEW
Nicole Enabosi is an essential freshman to the women’s basketball team, and has shown significant improvement since joining the team. Senior captain Alecia Bell has even noted Enabosi’s advancements.

The season ended in a 68-47 loss to James Madison University (JMU) in the semifinals of the CAA tournament. It marked the second year the women’s basketball team was left without a trip to the postseason. A team once dominant with players like Elena Delle Donne has found itself struggling to meet the lofty expectations set for themselves.

“The season didn’t go as I expected it to,” senior captain Alecia Bell said. “Going into my senior year we all had hopes of being top three in the conference, and we ended up being fifth. It was kind of an up and down season for us.”

Despite the disappointing result, a glimmer of hope shined through the tough season. A loss to JMU didn’t bar freshman Nicole Enabosi from making the CAA All-Tournament Team. During the tournament, she averaged 17 points and 9.5 rebounds while shooting 13-19 from the floor and 88 percent from the foul line.

The freshman ended her season being one of the statistical leaders for her team, leading Delaware in rebounds per game (7.1), steals (1.3) and placing second in field goal percentage (45.5 percent).

Bell was surprised by the newcomer’s on-court success.

“I remember how timid she was when we first started practicing,” Bell said. “Coach Martin started yelling at her, telling her to just play basketball. After the first four games, I was in awe. This was a freshman playing as if she were here for four years already.”

Enabosi recalls the beginning of the transition, nervously immersing herself in a new environment. Becoming comfortable was the catalyst for her success, and the first game against East Carolina University (ECU) was the turning point.

“Practices are so different to me than games,” Enabosi said. “I think once the game hit, it brought me back to how I used to play in high school. I really liked it and enjoyed it and think the transition really started there.”

The game resulted with Enabosi leading all Delaware scorers with 23 points and 10 rebounds. However, the Hens would eventually lose the game, along with 14 more, ending their regular season 16-15, just a game over the .500 mark.

Throughout the season, Enabosi found varying degrees of statistical success. An outburst, like the one she had against ECU, was then matched with a seven-point, 10-rebound performance against Georgetown. In a game versus UNC-Wilmington, she finished with only three points.

During her freshman season, Enabosi, who ended up averaging 8.9 ppg, had to adapt to defenses that played her tough.

“The beginning of the year, she was literally nothing but driving,” Bell said. “People started to pick up on that and played accordingly. In practices, we would play her the way other teams would play her, leaving her wide up from the free throw line.”

Enabosi’s jump shot was practically forced upon her. At one point during practice, her teammates would yell at her to shoot a wide open 15-foot shot. Hesitation was her biggest enemy, and Enabosi credits the coaching staff’s work in developing her strong basketball instincts.

“I just remember in high school I would do very silly things,” she said. “Coach Martin and my team, they have taught me a lot. They’ve improved my game and overall basketball I.Q.”

Enabosi now looks to the future, leaving behind a freshman year marked by her on-court growth and success. Her talents have been showcased, her passion palpable, Bell said. Time is on her side and with three years at the helm of the basketball team, she can focus on the skills necessary to bring back the championship pedigree Delaware basketball once had.

“I hope I’m one of the people who helps bring Delaware basketball back,” Enabosi said.