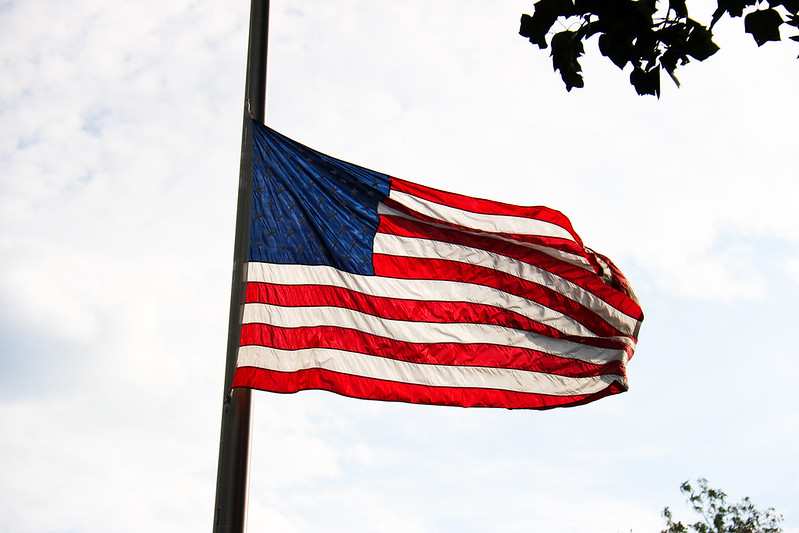 On Friday morning, as most university students shuffled to their 8 a.m classes, the first group of the university Air Force and Army ROTC cadets were beginning to run, and the groups wouldn’t stop running until 8 a.m. Saturday morning.

The cadets ran continuously around Main Street., hoisting the haunting, black POW/MIA flag high with the words “You Are Not Forgotten” embroidered across the bottom. Other cadets stood as honor guards on the Academy building lawn at either side of the Veterans memorial.

These cadets were participating in the 10th annual 24-hour vigil to honor those service members who are POW/MIA. The vigil was held by the Veterans of Foreign Wars (VFW) and the university Air Force and Army ROTC.

Cadet Capt. Alexander Van Patten was in charge of assigning cadets to their posts either running the flag or acting as honor guards.

“A lot of people think…why is it worth it to run endless laps for 24 hours with the POW/MIA flag?” Van Patten said. “It’s because it reminds us of the vigilance that those POW and MIA need [in order] to get through their hardship.”

The vigil, Van Patten said, is two-fold. It is not only held to increase civilian awareness but also to remind the students in the ROTC program of the harsh reality that they may have to face one day. Many of the volunteers at the vigil were students who are hoping to serve after they graduate.

“This is a very real threat that could happen to us,” Van Patten said. “It’s important for us to keep that in mind.”

The vigil also included a ceremony inviting anyone to come and honor the 83,000 service members who are either missing or unaccounted for. The ceremony included a speech given by Capt. Laura Covalesky, an assistant professor in the aerospace studies department at the university.

“The [POW/MIA] flag stands for a symbol of hope,” Covalesky said. “Hope is an astounding force.”

As the ceremony progressed, dozens of people walked past, stopping to pay their respects or to get a closer look at the model barracks set up across the lawn of the Academy Building; the barracks offered a glimpse of the conditions many POWs have to endure.

At the conclusion of the ceremony, the cadets continued to run by, holding the flag and showing no signs of exhaustion or slowing down. The honor guards standing at either side of the memorial did not flinch or hunch over — there was a sense of pride, hope and honor emanating from the the vigil’s volunteers.

“Hope is the belief…that things will get better,” Covalesky said. “[And] to our POW/MIA, we will never, ever forget.”