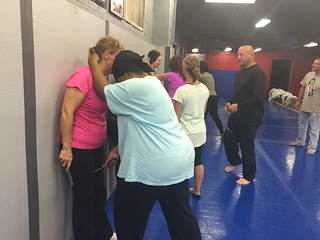 My partner and I sat back to back – eyes closed, legs crossed, with a knife lying between us. The goal: find the knife before she does. My adrenaline was at an all time high – even though the knife was rubber.

“You’re going to cut from the anus to the sternum,” Bill Walters says. His words remain imprinted in my brain. This move is called the “vagina cut,” and would ultimately disembowel anyone who came in contact with it.

The foundation has been in effect for a year, and member George Green says it is comprised of like-minded men that share the values of strength, physical defense, protection and outreach.

In an attempt to spread their values and assist others in gaining the strength and confidence to defend themselves, the foundation has held a total of four women-only self defense and knife training seminars, as well as several discounted jiu-jitsu lessons for women and children. They expect to continue these seminars every two to three months.

“It works two folds,” says Green, of New Castle. “It lets you understand the simple part of jiu-jitsu and how devastating it is, all at the same time.”

The workshops offer hands-on lessons that teach women how to defend themselves in an unsafe or threatening situation. The women who attend learn how to maneuver several different jiu-jitsu moves that would get them out of a perpetrator’s hold, ultimately choking the culprit into unconsciousness.

I watched a woman of my size – no more than 120 pounds and just a few inches above five feet tall – flip a full grown, heavyset man over onto his back, then commence to choke him until he could longer speak.

The first move the members taught the women was the collar choke. Each woman was instructed to grab hold of their partner’s collar, while twisting and squeezing both hands towards each other. If done correctly, this would unfailingly block blood passage through the carotid artery, causing the culprit to lose consciousness. After practicing this maneuver several times, we learned how to fasten this grip from inferior positions. Midway through the seminar, every woman was successfully able to execute the protective move that would release her from a choke hold, restrain the attacker and flip the person onto his or her back.

Once those moves had been mastered, out came the knives. The members of the foundation walked each attendee through the different knives that are legal to keep on a person’s body.

Walters, also called “Wild Bill,” pointed out another member of the foundation during his lesson.

“The only person I’ve ever stabbed is him,” he says.

The members of the foundation explained that the defense moves they were teaching should be used only in an emergency situation. The first rule about knife defense, they continued to reiterate, was that there would always be blood.

Walters, along with other members, also presented what they referred to as their everyday kits, or the safety items they carried on them everywhere. The kits primarily included a small flashlight, an Emerson knife and a lighter.

Green says that he hopes each woman takes away the knowledge that the ability to defend herself is not a difficult task. Because the foundation wants to ensure that as many women that would like to attend are able to, each of these seminars have been free. Donations are raised through bar and auction nights and are open to the public.