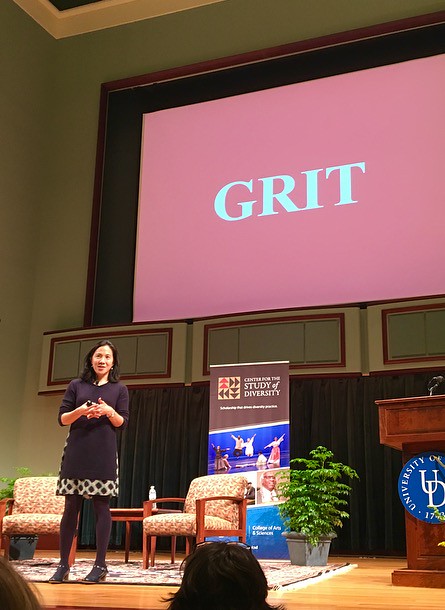 Ellie Halfacre/THE REVIEW
Best-selling author of “Grit: The Power of Passion and Perseverance” Angela Duckworth delivered a lecture at the Roselle Center for the Arts concerning perseverance and diversity.

Olympic figure skaters, Nobel Prize-winning economists and Oscar-winning actors all have one thing in common, and it goes deeper than their awards and accomplishments. After years of observing high achievers, and excelling as one herself, Angela Duckworth found the most important personality trait in determining success: grit.

In her bestselling book, “Grit: The Power of Passion and Perseverance,” Duckworth outlines this argument with evidence from her work in teaching, consulting and neuroscience research. Her presentation at the university last Tuesday was the first lecture in the new Center for the Study of Diversity (CSD) series on campus culture.

James Jones, a professor of psychology and Black American studies and the director of the center, invited Duckworth to speak because she is “seven parts perseverance, three parts passion.” Her presentation at the Roselle Center for the Arts reviewed the findings of her character development research, as well as its implications for campus diversity.

“It’s the doers in the world that I most respect,” Duckworth said to the audience.

A 2013 MacArthur Fellow and professor of psychology, she founded the Character Lab at the University of Pennsylvania after years of teaching middle school math.

Over the course of her career, she has advised the White House and Fortune 500 companies on what makes a person “gritty.” Gritty people strive for completion in their endeavors, and they show resilience in the face of adversity.

Effort unleashes the power of your talent, Duckworth said. Instead of “mindlessly repeating actions without intention,” Duckworth endorses the act of putting one’s effort behind “deliberate practice.”

Duckworth examined the use of “deliberate practice” in the habits of young National Spelling Bee winners and successful West Point cadets. However, no high achiever is born with grit. Instead, people gain it over time. Today, Duckworth’s scholarship almost exclusively concentrates on building grit in children.

Her presentation outlined grit development. At the start, it is important to developing one’s interests.

“You’ll never find a paragon of grit without passion,” Duckworth said. “In choosing what to do, I always take into account whether it will benefit other people.”

High achievers believe that their lives have “lasting meaning.” Many people cultivate that purpose through trial and error, as well as further education.

“I think her lecture was inspiring and helpful,” Yanmiao Xie said. A Ph.D. student in education at the university, she said the presentation proved that “if you find something meaningful to the world, you can keep doing it.”

Strong interpersonal relationships can provide and support this sense of meaning. People, both young and old, need someone to push them. 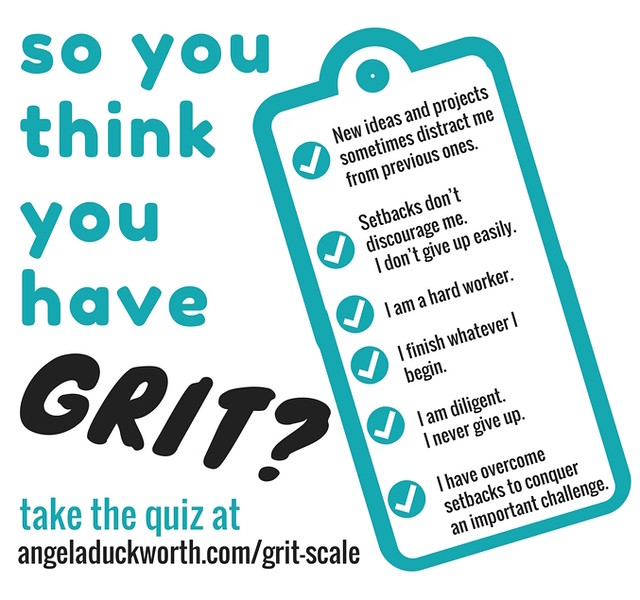 “There is someone who doesn’t let you quit on a bad day, who says ‘right now, I’m going to be your grit for you,’” Duckworth said.

This holds true in both individual and cultural relationships. When Jones asked Duckworth about building a gritty culture on campus, Duckworth explained that diversity and grit work hand-in-hand. Different perspectives produce more feedback, which makes “decisions better and people smarter.”

“Racial prejudice is psychologically real in the minds of kids,” Duckworth said. Self-confidence and opportunity is the bedrock of grit, so social marginalization has an impact. Traumatic events also have unseen effects on children’s development, Duckworth said.

Educators therefore have a moral responsibility to close the “grit” gap.

“I believe that people are pretty complicated,” Duckworth said. “But perseverance, like passion, can be developed.”

With this potential in mind, we need to change our minds about changing our minds, Duckworth said. A fixed mindset is less conducive to grit than a growth mindset, as one needs to believe that change is possible.

The CSD believes in growth, and strives to improve campus climate.

“Diversity is a topic we need more grit in,” Jones said.

Duckworth closed her presentation on a call to action. For educators and administrators, investing in character development means fostering student success.

“We need to tell children not to overcome unlit paths,” she said. “We need to light the path for them.”