Mni Wiconi, water is life: Faculty and students speak out about #NoDAPL 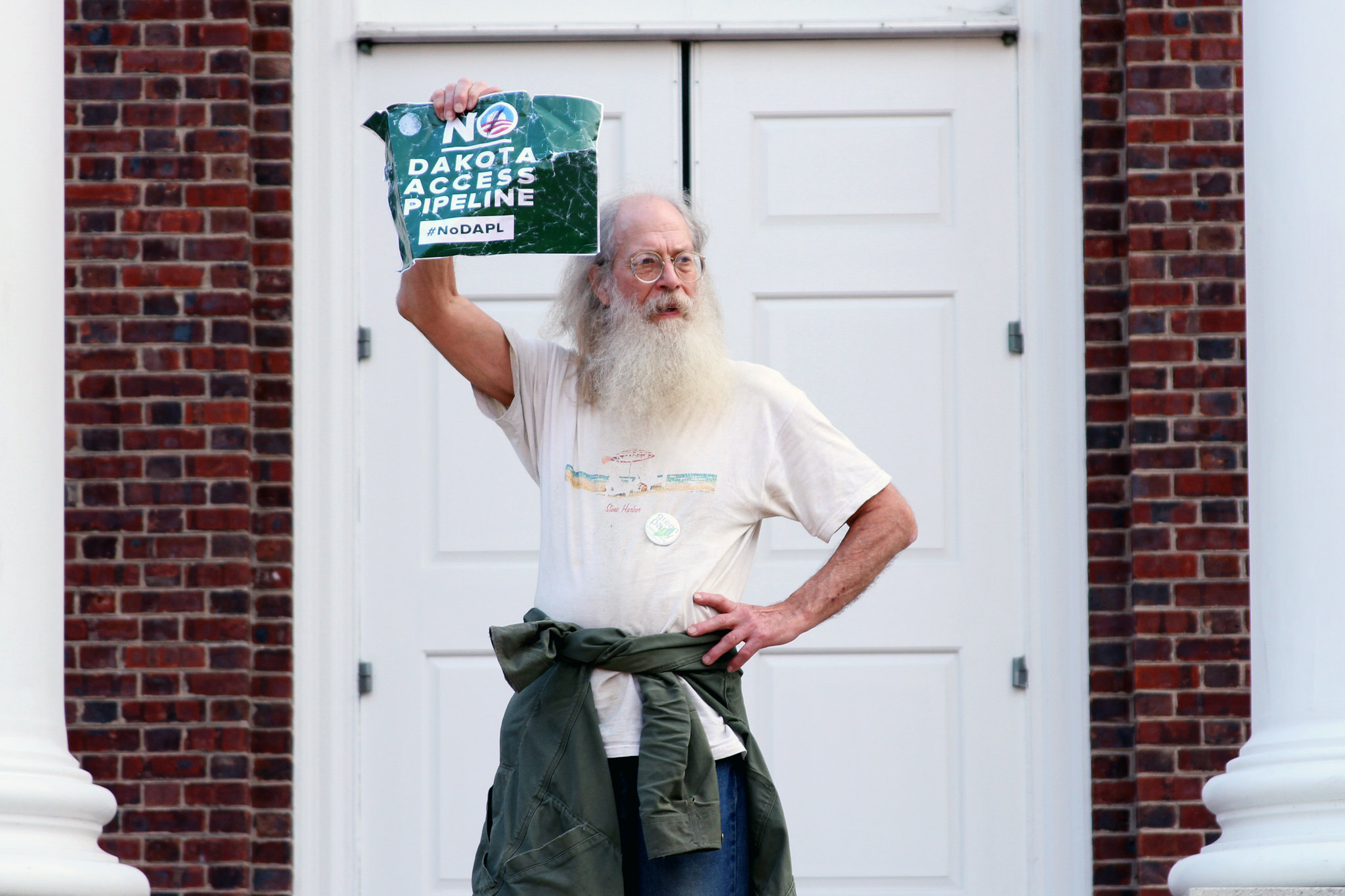 Minji Kong/THE REVIEW
Students and Faculty hosted a forum last week, discussing the Dakota Access Pipeline Line and the implications it has on the indigenous people of Standing Rock.

On April 1, a resistance movement led by the Standing Rock Sioux Tribe started in northwest North Dakota. It began in prayer, as Native Americans settled in the path of the Dakota Access pipeline (DAPL), a project by Energy Transfer Partners, L.P. On Nov. 15, anti-DAPL protesters, with over 250 demonstrations planned in 43 states and more than 300 cities, held a national “Day of Action.”

More than 60 students and faculty members filed into a Gore Hall classroom on Nov. 16 to discuss the #NoDAPL movement.

The original proposal for the 1,172-mile pipeline called for the DAPL to cross the Missouri River north of Bismarck, the capital of North Dakota.

After the residents of Bismarck spoke out against the pipeline, citing the potential contamination of their drinking water, a new route was proposed and accepted by state and federal officials, effectively shifting the risks of the pipeline away from the city of Bismarck to the Standing Rock Sioux Tribe.

“Our issue with the DAPL has spanned hundreds of years for the indigenous people of North and South America,” Coker said. “We can date the roots of this issue back to the ‘Doctrine of Discovery,’ when European Christian monarchs received the blessing of the pope to Christianize inhabitants of the Americas by any means possible.”

The new DAPL will cross Lake Oahe and the Missouri River. The pipeline will not only disturb burial grounds and sacred sites on the tribe’s ancestral Treaty lands but also endanger the drinking water of the Standing Rock Sioux — now directly upstream from the proposed pipeline.

Ott explained that indigenous people have a different relationship with the United States government than other people of color. She said that it is a “government-to-government relationship” and indigenous people are connected to the United States exclusively through treaties. Ott also said that because of this, they are legally allowed the right to oppose the pipeline and the right to protect their rights as a sovereign nation.

Coker explained that as opposition and resistance in Standing Rock increased, so did police presence.

“Look at the treatment of peaceful protectors, gathering in prayer to defend their inalienable rights to clean water, clean air and a living environment,” Coker said. “They have had their civil rights and human rights impaired…simply trying to protect their right to clean water.”

Coker also said that oil is “not a sustainable fuel source” and referred to the pipeline as a “bridge to nowhere.” The unsustainability of oil and carbon fuels directly contrasts with the obligations of tribal leaders, as they are tasked with directing the sustainable growth of the tribe.

As conflict between the native tribe and government project increases, all of the speakers agreed to the vital necessity of alliances between indigenous people, with minimal political power as a minority population, and non-indigenous people.

“We rely on our friends, neighbors and concerned citizens to join us to make pleas to politicians,” Coker said.

Horton described “die-ins,” which happened throughout the nation on the #noDAPL “Day of Action.” On command, crowds of people dropped to the ground. Dual slogans of “water is life” and “oil is death” were adopted, suggesting that the pipeline represents a life-or-death situation for indigenous people.

Horton asserts that the dual slogans serve as an outcry to the transnational climate change governance; as there is a grossly uneven dissemination of climate change effects, which are “distributed in the grooves of colonization.”

As for those at Standing Rock, Horton said that there have been multiple instances of indigenous people “restaging episodes” from moments throughout American history. She explained that this was to show that the “struggles are not over” for indigenous people in the United States.

“Rather than thinking of this as a nostalgic wish,” Horton said. “This functions more as a theatrical representation of the past, in which the nineteenth century history of struggles are not over; the conflicts, demonstrations of resistance and complex negotiations repeat throughout a history of colonization that continues to unfold now and take various different forms.”

The presenters also spoke to the current political atmosphere, as the presidency and Congress present themselves as a opposition to the Standing Rock movement. In fact, President-elect Donald Trump is a stockholder in Energy Transfer Partners, L.P.

In the Army Corps of Engineers’ review of the pipeline, released on Nov. 14, they determined that “additional discussion and analysis” are needed before construction is allowed in Standing Rock.

They also put out a statement on Nov. 28 saying that all protesters are required to leave Standing Rock by Dec. 5 or they will be arrested. This decision was based on what the Army Corps referred to as a “violent protest” near the Backwater Bridge and Highway 1806.

While the Army Corps has invited the Standing Rock Sioux tribe’s input on the proposed pipelines, Naylor urged students to consider the difference between “inviting people to a table that is already set” and “clearing off that table and resetting it again as a larger group with multiple perspectives.”

“We cannot simply see what is happening in Standing Rock as something that is happening over there; something that is outside of us,” Naylor said. “Our actions are not confined to ourselves as individuals; they are not confined to our household or our zip code. We have an impact. Starting now, we can make decisions in hopefulness, for a future that contains many voices.”