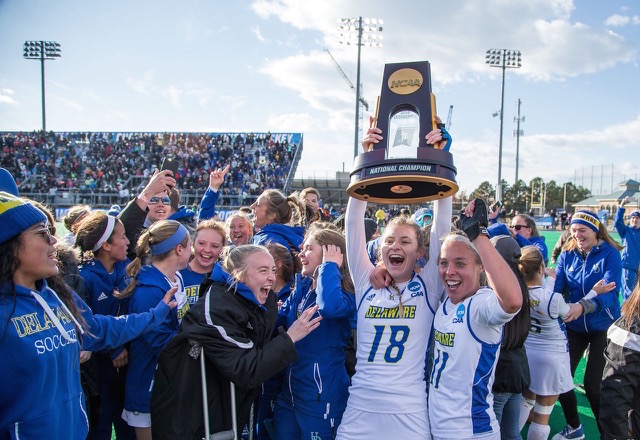 Digging deeper into Miller’s track record will expose a tidbit that appears insignificant to many –– one international player appeared on her team in 17 seasons. Comparing that number to the 10 that van de Kerkhof has accumulated in only six seasons provides quite the contrast.

Born in The Netherlands, van de Kerkhof spent a large portion of his career coaching youth leagues in Europe before accepting the Michigan State assistant coaching position in 1999. He spent seven seasons in that spot before becoming the Spartans head coach in 2006. After collecting a Big Ten championship and four NCAA tournament appearances in five seasons, he moved to the East Coast to become the Delaware head coach, a move that many labeled “career suicide.”

It has been just the opposite for the Dutchman, who lead Delaware to its first ever field hockey National Championship last Sunday. On this championship team were six international players, making up 25 percent of the roster.

It’s a noteworthy number –– and not one that is inflated by players sitting on the bench –– all six of these international players played critical roles in Delaware’s national championship run. Among them: a starting midfielder, Marjelle Scheffers, two all-CAA second team selections, Lisa Giezeman and Kiki Bink, a senior captain Esmée Peet, one of the nation’s best goalies, Emmeline Oltmans, and the best scorer in the country Greta Nauck.

Oltmans and Nauck paved the way for the Blue Hens, and the contributions from the other four international players are very much evident throughout their historic season, but it is the integration of the international players with the American talent that makes Delaware field hockey such a captivating destination.

The homegrown stars are highlighted by offensive catalyst Taylor Lister (Pa.), all-CAA rookie selections Ally Pollack (Md.) and Sarah Horgan (Va.), senior defensive leader Kayla Devlin (Md.) and co-captains Maura Zarkoski (Pa.) and Meghan Winesett (Va.).
While it may be an eye-opener for Delaware field hockey supporters, this combination of international and American players is nothing new for successful field hockey programs throughout the country –– the three other teams represented in the field hockey final four this November tallied a combined 13 international players.

Connections to Europe for van de Kerkhof certainly aids in his ability to recruit international talent –– and not just any talent –– Oltmans and Nauck are the cream of the crop at their respective positions. Yet that talent goes nowhere without surrounding pieces and van de Kerkhof has created a well-balanced and diverse team, loaded with depth.

While they may lose a few seniors, the program remains intact. After winning the 2016 national title, Delaware will enter the 2017 season with lofty expectations. At the same time, though, they’re not rushing to forget about this one any time soon.

Rocco out as Delaware head coach after disappointing 5-6 season