“This rally is long overdue”: Students and community members gather for solidarity 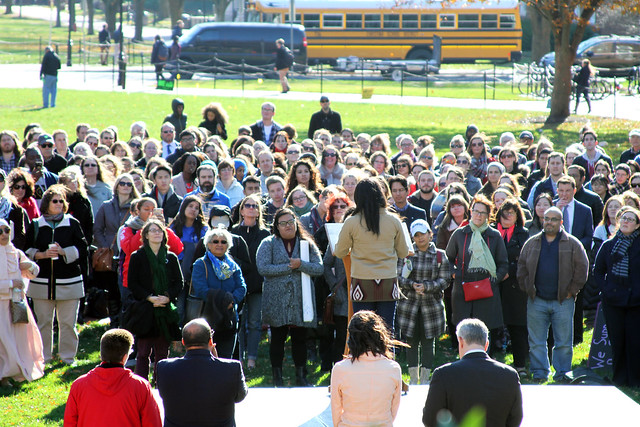 Minji Kong/THE REVIEW
Dr. Jaremka addresses the crowd gathered at the “We Stand With You” event.

Students, staff and community members alike weaved among posters with phrases of affirmation like “we support refugees” and “UD stands by the LGBTQ+ community” written on them. The Bill Withers song, “Lean on Me,” played as they wandered, waiting for the “We Stand With You” demonstration to begin.

Five different speakers stood on the stage, set up on the North Green, to express their concerns about the current lack of respect for diversity and inclusion in our nation, as well as on our campus. The list of those speaking included President Dennis Assanis and Dean of Students José-Luis Riera.

“This is not about who you voted for or your political persuasion,” Riera said. “Instead, this about how we will support the advancement of a campus culture that reflects inclusion, open and honest speech, learning and safety.”

He stressed the importance of finding a middle ground in creating a more open community, achieved not by “stifling dialogue,” but through communication.

“Be willing to share your point of view in a civil and respectful manner,” Riera said. “Be open to feedback.”

Assanis agreed with this sentiment.

“UD has not always gotten it right when it comes to equity,” Riera said, but that does not mean that the university is not committed to getting it right in the future.

We Stand With You was organized in hopes to achieve this goal. The demonstration was arranged by Lisa Jaremka, an assistant professor in the Department of Psychological and Brain Sciences. The top priority, as explained on the event’s Facebook page, was to show “UD Solidarity.”

“I was inspired to organize this event because I was deeply troubled by the national rhetoric that I was hearing surrounding diversity and inclusion,” Jaremka said during the event.

She explained that she felt “depressed, pessimistic and hopeless” due to a recent surge in hate crimes and the hate speech found in a dorm on campus. This hopelessness, however, was what motivated her to take action and make a difference in the local community.

Through taking action, Jaremka began to feel “empowered” and she wanted to use her voice to shut down derogatory and hateful things.

“I’m no longer afraid because I now understand that your rights are more important than my discomfort,” Jaremka said. “So if I annoy a friend or a family member or if I feel a little uncomfortable because I stood up for you, then so be it. Because you matter and you deserve respect, compassion and equality.”

The importance of the rally was a repeated theme, heard not only from those attending the event but also from those who spoke on stage.

“We should stand with every person and every unrepresented group,” sophomore Ashley Mensch, an attendee of the event, said. “Everyone should be represented.”

Senior Shaymaa Ismaa’Eel, also an attendee, agreed. She said that despite the lack of diversity on campus, “showing that we have that drive to stand together and help one another” is a solid starting point.

In addition to speakers, there were tables set up at the event where volunteers handed out resources about becoming an active political advocate. One of papers detailed how a bystander can “peacefully intervene” when a person is being harassed. Another paper listed faculty and RSOs that students can reach out to for both support and additional resources.

Megan Nadzan, a graduate student currently being advised by Jaremka, was a volunteer at the event. She said that it was organized in roughly two weeks and although it took a considerable amount of effort, it was acknowledged how necessary the demonstration was.

“We need to not leave people out of voicing their opinions. I think it’s very important to show everyone that we care,” Nadzan said.

Part of the importance of the event was showing solidarity in person, attaching names to faces and taking the discussion offline. Speaker Vanessa Hatton, a junior, enforced this concept in her speech.

“We should be frustrated and angry together,” Hatton said. “We need to channel that rage that wells up inside of our bodies into action.”

She also said that the “rally [was] long overdue” and the events currently happening may spark desire to demonstrate, but did not create the need for demonstrations.

“I have been existing, walking around as a student who has been perpetually forced to come to the realization that the fight for true social justice will continually be ripped away with every inch forward,” Hatton said.

Karla Bell, the co-chair of the LGBTQ Caucus, director of clinical education and assistant professor for physical therapy, also spoke at the event.

“Respect for one’s difference does not necessarily mean acceptance or agreement with a position,” Bell said. “That’s the beauty of diversity. We should all strive to have our thoughts and beliefs pushed in different ways to grow and enrich our thinking.”

The event ended with Bell reading a pledge to the crowd, asking for those who felt comfortable to verbally respond ‘yes’ to questions like “do you pledge to encourage diversity?” and “will you challenge stereotypes?”

The stage and microphone remained after the formal portion of the demonstration finished, giving members of the crowd the opportunity to speak. This continued the event’s theme of allowing those who want a voice to have one and stressed the importance of having involved activists on campus.

“Protests and marches will always be diminished to nothingness without legal action, without lobbying and without pressure from the constituents who elect elected officials,” Hatton said. “Symbolic activism will never allow us to achieve the true goal of liberty and justice for us.”