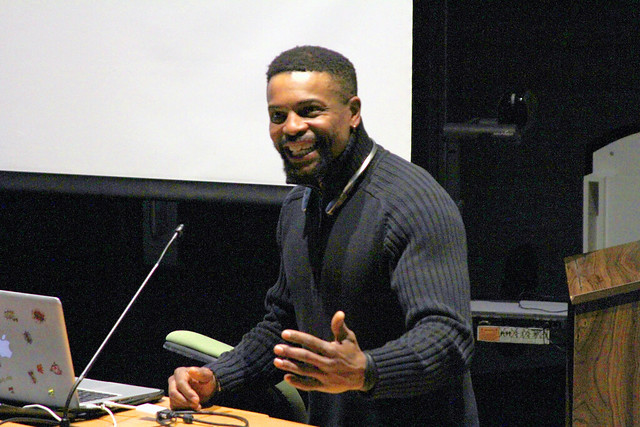 Minji Kong/THE REVIEW
Clintel Steed talked to a group of Art and Design students about the struggle of feeling divided as an African-American artist.

Benjamin Franklin appears with a halo and Andrew Jackson is joined by a Native American on distorted paintings of American currency in a collection of paintings by Clintel Steed titled “Money Series.”

“When I’m doing these talks, it’s more about ideas,” Steed said. “I’m not up here to show you my best paintings. I’m here to talk to all you artists about how we move through the world. I’m interested in the journey we all take as artists and how we all share our stories.”

Steed takes inspiration for his drawings and paintings from his surroundings, no matter where he lives or works.

Steed was born in Salt Lake City, Utah. He attended the Art Institute of Chicago, where he received a BFA in painting and he has traveled the country and the world pursuing his art. He spent a summer abroad in Florence, Italy. Steed later continued his studies in Chicago and New York, earning an MFA.

“I was a guy coming from Utah living in Harlem,” he said. Life in Harlem is the subject of many of his landscape paintings.

When he finished graduate school in 2001, Steed went on to work at the Metropolitan Museum of Art in New York City, where he was surrounded by art every day for three and a half years. He was inspired by the constant exposure.

“I would always have a sketchbook,” he said.

Some of his biggest inspirations during this time were Philip Guston and Giorgio de Chirico.

“I always go back to the classics,” he said. “Without art history I feel like I would be nothing. It’s my bread and butter.”

Steed often paints in series to let the subject and themes evolve naturally as each painting progresses. “Money Series” displays art from the bills with additional contemporary historical scenes, until only a few recognizable elements of the money are visible.

Steed spoke highly of the importance of finding your subject matter as an artist. He said it can come from a conversation, from walking down the street. Subject matter is about “being in the moment, painting the thing in front of me and being lost in form, color, shape.”

Often, his subject matter of choice is the struggle of feeling divided.

“As an African-American male, I’ve always kind of felt divided in myself,” he said. “An African, an American and a person of society — this is my way of trying to deal with that.”

The event’s coordinator, Art Professor Peter Williams, said Steed’s message reached the members of the audience, regardless of their background.

“It was exciting for me to have an artist of his quality to come to our university and provide such a distinct point of view,” Williams said. “I think this is the opportunity for diversity that the university is looking for.”

Though he has painted about life as an African American, Steed wants to shake the idea that, because of his race he has to make “African-American art” or stick to one specific style.

“I’m just an artist, I’m just human being,” he said. “I don’t want to have a style. I just want to navigate life and see where my stomach takes me.”

Politics, current events and a love of community are common themes in Steed’s work.

“Sometimes I want to talk about the things that aren’t talked about— and that’s love,” Steed said.“There’s been a lot of pain in America for a long time, but the thing about human beings is we will get past that.”

Currently, Steed is working on a series of paintings about the Olympics, conveying the stories, emotions and “consciousness” of the athletes. One example depicts the moment of defeat in the final seconds of a boxing match. After being certain that he would win, the boxer loses focus and the momentary lapse causes his defeat.

“There’s something about the idea of the athlete being so centered and one with themselves,” he said. “As an artist, you have to be centered with yourself, too.”

Deanna Marino, a freshman visual communications and English double major, found the talk to be highly inspiring, especially as someone looking to pursue art.

“He was really different than a lot of artists I have heard talk before. He wasn’t super concerned with creating an image or having a specific kind of content,” she said. “He was just kind of being, as he put it, ‘a living organism’ which was really cool and inspiring.”

Steed shared some advice for the young art students present:

“Don’t overthink. The emotions are always there, all you have to do is realize them, put them to fruition,” Steed said.