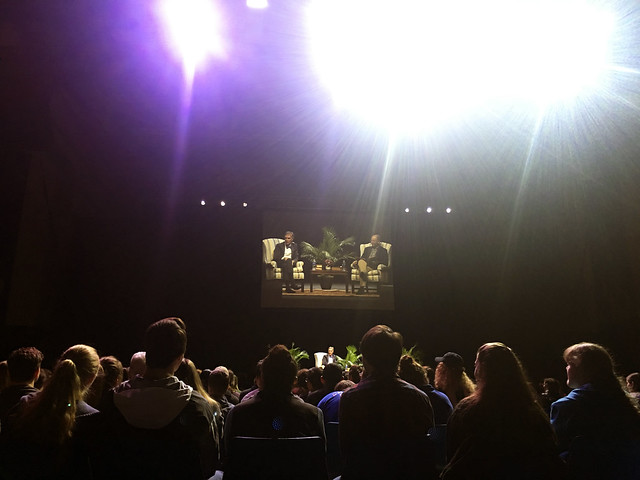 Minji Kong/THE REVIEW
Bill Nye spoke at the Bob Carpenter center. The event was moderated by professor McKay Jenkins and hosted by SCPAB.

A chant rung out in the Bob Carpenter Center on March 21, mimicking the opening sequence of the Emmy Award-winning PBS show, “Bill Nye the Science Guy.” Students and community members called in a united cheer: “Bill, Bill, Bill, Bill!”

When Nye came on stage for the event, presented by the Student Centers Programming Advisory Board (SCPAB), he was met with the applause of around 3,100 audience members. Joining him was McKay Jenkins, the moderator for the night’s discussion. Jenkins is a professor of English, journalism and environmental humanities at the university.

Nye set out his intentions at the beginning of the event.

Instead, he said he wanted citizens, regardless of field of study or profession, to be scientifically literate. The discussion on the importance of STEM education has now expanded to include the arts, he noted, as well as design.

“They call it STEAM, and then STEAMD,” he said. “Pretty soon we’re gonna call it ‘school!’”

The beginning of the event focused largely on Nye’s biographical background. Nye went to Rehoboth Beach every summer with his parents, who raised him to appreciate the sciences, public service and the liberal arts. His father, a prisoner of war in World War II, used science as a way to sustain his spirit and tell the time of day while in captivity, and his mother was a codebreaker. Together, they would write limerick poems at the dinner table.

When he graduated from Cornell University and began working as an engineer in Seattle, Nye found that “what I loved to do was inspire people.” He quit his job on Oct. 3, 1986 “to influence generations ahead.”

As Nye pursued this mission and tried out stand-up comedy, the head of the NBC affiliate in Seattle was looking to produce a science show.

“I took the opportunities as they came,” he said.

One such opportunity was the “Bill Nye the Science Guy” television show, popular in classrooms when university students were in elementary school.

For them, Nye’s show seems to represent a certain nostalgia. One audience member remarked that it was nice seeing Nye somewhere other than on the television that teachers would roll on a cart into their classrooms.

“I definitely watched his science videos when I was in class,” junior Alison Gibney said. “I think he means a lot to people our age, because we all kind of grew up with him. He was like our first experience of science in a fun and exciting way.”

“I love him,” Francesca Speranza, a junior chemistry major, said. “I’m here because my apartment Wi-Fi is ‘Bill Wi the Science Fi.’”

“We live in a culture that is often reputed to be disinterested in science, or if you live in the White House, against science,” Jenkins said.

At one point, Nye mocked President Donald Trump’s mannerisms, and later he told the audience that he didn’t know who the president would be in two years’ time.

“His business with people who are adversaries of the United States, this is a serious business,” Nye said of Trump. “Built into the U.S. system is change, so whatever is going on right now, it’s going to change — and let’s hope that it changes for the better.”

Cassidy Nalbone, a junior marketing major and the vice president of variety for SCPAB, said that the group was scared that the event would be too political. The initial proposal for the event was a slideshow presentation on climate change.

Nye was also addressed controversy about creationism and evolution, a topic he famously debated with Christian speaker Ken Ham in 2014 and subsequently wrote a book about, titled “Undeniable.”

“They used me to raise money,” Nye said of Ham and the other young creationists who organized the event. “Adults can believe what they want, the tragedy for me is the kids.”

Children were visible in the audience, and one asked the first question in the Q&A portion. “We have a question from a very small person here,” Jenkins said.

A child, escorted to the microphone by an adult, asked “How do germs spread?”

“That was probably the highlight of my night,” Nalbone said.

Nye responded by explaining the definition of a germ, and also addressed the rise of the anti-vaccination movement in the United States.

“To the anti-vaxxers out there, I love you as a fellow human,” Nye said, “but you are wrong.” Without vaccines, “you are going to become a Petri dish of death,” he said.

The conversation also turned to the topic of extraterrestrial life. Nye is the CEO of the Planetary Society, an interest group for space exploration.

“You will all be alive when evidence of life is found on Mars,” Nye said. He said that this proof of life will likely be a fossilized bacterial mass, and if found, its discovery would “change the course of human history.”

However, Nye does not endorse the colonization of Mars in the case of this discovery.

“You cannot freaking live on Mars,” he said. “We have to be optimistic, we have to make a stand here.”

He recommended that students get outside, reduce their carbon footprint, go to the March for Science in Washington, D.C. and celebrate Earth Day on April 22.

He also asked them to tune in to his new show, “Bill Nye Saves the World,” premiering on Netflix on April 21, and “binge away” on its content as they work toward creating a more sustainable, scientifically literate world.