Horrors of the Mexican Drug War: Cartel violence and the Internet 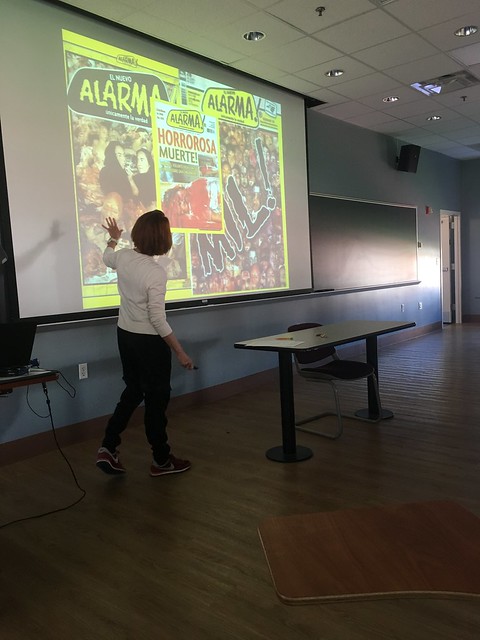 Kristen Mulvihill/ THE REVIEW
There are no “good guys” in the Mexican Drug War, drug trafficking is economic and Mexican news has been traditionally an organ of the state.<

Persephone Braham started her presentation with a warning of graphic, disturbing images included in her slideshow.

Braham, who spoke at the university on Wednesday in Recitation Hall, told students to imagine walking into a supermarket, picking up a copy of the “National Enquirer” and seeing images of severed body parts on the front page. This happens in Mexico.

“More civilians are killed in Mexico as a result of drug violence than in our two wars in Afghanistan and Iraq, which are ongoing,” Braham said.

Braham, an associate professor of Spanish and Latin American and Iberian Studies, presented on the Mexican Drug War and the cartels’ use of the Internet and news outlets. She studies tabloid journalism and the growing online presence of Mexican cartel violence from the ’90s forward.

She has written “Crimes Against the State, Crimes Against Persons: Detective Fiction in Cuba and Mexico” and has published several articles on Latin American and Caribbean literature.

Her talk was part of the Global Digital Cultures lecture series, which is offered by the Center for Global and Area Studies. It may be taken as a one-credit pass or fail course titled Issues in Global Studies.

Braham prefaced with three important concepts: there are no “good guys” in the Mexican Drug War, drug trafficking is economic and Mexican news has been traditionally an organ of the state.

“Take from your minds all thought of this being an issue of good versus evil, or even legal versus illegal in most contexts,” Braham said. “This is economic.”

During the ’90s, Mexico suffered a series of economic and political crises. The government started losing its grip over mainstream news. This is when the cartels stepped in.

Braham explained that the cartels leveraged the news media and the internet to communicate visually with the public and the government. Gruesomely violent images were used as shock tactics and visual propaganda by the cartels.

“This discourse of extreme violence was a visual journalistic commonplace in Mexican tabloid news,” Braham said.

The mainstream news in Mexico began facing intense pressures from the government. When journalists reported on cartel violence and crime, they were blamed for provoking violence. Braham noted that Mexico is currently the third-worst place in the world to be a journalist, behind Iraq and Syria.

“No one is able to tell exactly how many journalists have been killed since the war started,” Braham said.

Mexico is also ranked 149 out of 180 countries in Reporters Without Borders World Press Freedom Index. This measures the amount of freedom available to journalists in a nation. In comparison, the U.S. is ranked at number 41.

Journalists in Mexico began mysteriously disappearing and some were even killed while out to dinner with their families, Braham said. The mainstream press was completely under attack.

In response, the mainstream media began practicing self-censorship. Instead of reporting on the details of horrific crimes, headlines vaguely told readers what happened – with no more investigating into the “who’s” and “why’s,” Braham said.

“We call this a rhetoric of nominalism, where it looks like they are saying things that are news, but really they are just saying things,” Braham said. “The quality of the news in Mexico is really difficult to ascertain now.”

The creation of the Internet sparked the rise of blogs and social media as new sources of news in Mexico. Braham said that particularly after 2007, blogs and other social media outlets began to relay the investigative news and violent images that were suppressed from the mainstream news.

The cartels used this to their advantage to send graphic messages, also known as “narcomensajes.” The narcomensajes created by the narco cartel combine text and images of body parts to show the public, other cartels and the government the bloody consequences of defiance.

“What happens usually is the drug cartels kill a mass of people, cut them up and post a sign saying who they are and why they were cut up. It’s then the police’s job to clean it up as fast as possible, before anyone can take a picture of it,” Braham said. “The cartel does this knowing that someone will take a picture and put it online.”

The drug cartels also used the internet to establish an amicable dialogue with the public. Some messages offered help and protection to civilians and criticized the government, claiming it wasn’t on the public’s side.

Braham concluded with telling students that the actual drug problem is in the United States, not in Mexico. Our purchase of illegal drugs provides Mexico with its majority of cash flow. Additionally, the majority of weapons used in the Mexican drug wars come from the United States.

“It’s important to understand that when it comes to the Narco cartels and trafficking, it is an amorphous concept. Anyone who uses illegal drugs here in the U.S. is complicit,” Braham said. “It also cannot be separated from the state and law enforcement in Mexico.”