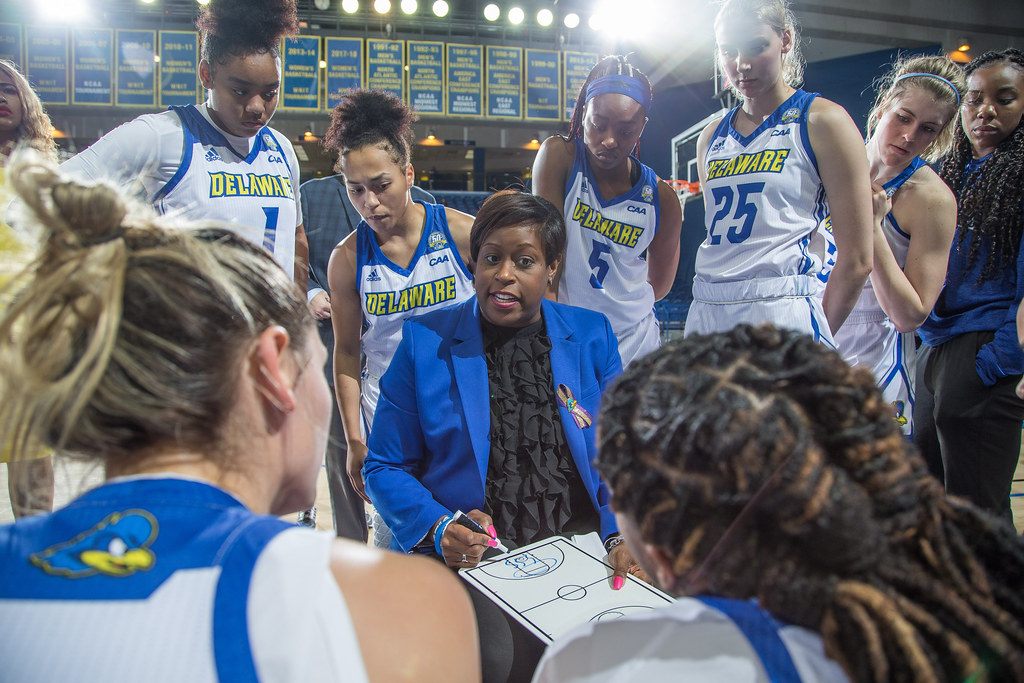 Sarah Boekholder/University of Delaware Athletics
Delaware men’s and women’s basketball is currently set to begin its season on Jan. 2.

University sports are back this winter, and that means both the men’s and women’s basketball teams are gearing up for the court. Per usual in 2020, nothing will look exactly like normal.

The first domino in the road to the start of the season came on Oct. 14, when the Colonial Athletic Association (CAA) announced the 2020-2021 conference schedules for all ten teams.

The university programs will play consecutive games against the same opponent on Saturday and Sunday during the months of January and February, with the exception of their two-game series against Drexel.

For the women’s team, this unique schedule does not change their final goal of winning the CAA and qualifying for the NCAA Tournament, according to head coach Natasha Adair.

However, what will change is the way that the players prepare for back-to-back games against the same conference opponent. Coach Adair notes the team is putting a premium emphasis on conditioning, health and nutrition going into the basketball season.

“We are really focusing on the best practices to make sure our players’ bodies are able to sustain the back-to-back games,” Adair said. “There will be strategic things that we do [in] recovery, rest, hydration and nutrition.”

In addition to conditioning and health, Coach Adair said there has been a focus on “player input,” especially since their preparation has been affected by health standards and an unusual schedule.

Despite the challenges of preparing for a season during a pandemic, Adair said practice has been “more competitive than [she’s] seen in a long time.” She also praised the leadership of junior point guard Paris McBride as the team has returned to practice.

“She is the extension of the head coach on the floor [and] she doesn’t skip a beat, leading our freshmen,” Adair said.

Adair also mentioned Lizzie Oleary, senior forward, as a key leader for the team this season. As a fourth-year member of the program, Oleary is no stranger to the coaching staff’s expectations.

“It is my job as a senior and a leader to convey the message to all of my other teammates and make sure that they don’t just hear it, but they listen,” Oleary said.

She also expressed optimism about the new pattern of conference matchups and how consecutive games could be an advantage for the Blue Hens.

“Adjusting and adapting quickly is something that we need to learn to do as we practice,” Oleary said about playing back-to-back games against the same opponent. “But it could also be a nice thing because it’s fresh in our heads.”

Leaders like McBride and Oleary, among others, will be crucial for the team to successfully navigate the upcoming season. Their on-court contributions will also be of the utmost importance as the team learns to lean on new faces.

Adair’s squad loses four of its five top scorers from 2019-2020, with the biggest departure being forward Nicole Enabosi. The All-CAA First Team selection was a force in the paint, averaging 17.1 points and 8.4 rebounds per game last season.

The team will look to recover from losses in offensive output by relying on improving and incoming players. On the defensive side of the ball, Adair wants the team to keep its identity of rebounding well and imposing their will against the opponent.

“We want to take pride in stopping our opponent and making it hard for them,” Adair said.

On the men’s side, the loss of Nate Darling’s outstanding scoring ability, averaging 21 points per game last year, will be one of the toughest challenges to overcome. Men’s head coach Martin Ingelsby said a “balanced” approach will be a way for the team to continue to succeed offensively.

The return of starters and seniors Ryan Allen (guard), Kevin Anderson (guard) and Dylan Painter (forward) will also be helpful to their offensive approach, Ingelsby said.

“We’re going to need [them] to score the basketball for us and be aggressive on the offensive end,” Ingelsby said.

Other key pieces to the team, such as guards Johnny McCoy, Ebby Asamoah and forward Aleks Novakovich, will help provide scoring ability and depth, according to Ingelsby.

As for preparation, Coach Ingelsby is hopeful that the team’s showing in practice can help translate to a solid start to the season. Last year’s version of the Blue Hens showed that they were capable of starting off hot, with a 9-0 record in their first nine games.

“[They’ve] been highly-spirited and competitive,” Ingelsby said. “I’m excited to learn about our team as we practice.”

He also stressed the importance of health and a “short-term memory” given the conference schedule of Saturday and Sunday games.

When it comes to the postseason, Coach Ingelsby sees the goals for his team the same as Coach Adair — make a run at winning the conference.

“Hopefully there’s a chance we’re in the [CAA] Championship game, that’s what we aspire to do,” Ingelsby said. “That will continue to be our goal every year.”

The journey to the CAA Championship for the men’s team will begin Jan. 2 against the College of Charleston, home at the Bob Carpenter Center. The women’s team will head on the road to Charleston to kick off their season.