On Sept. 15, the Biden Institute hosted a special event titled “A Conversation with Ban Ki-moon.” The event, headlined by the former United Nations (U.N.) secretary-general, focused on major issues of foreign policy facing the world today, as well as Ban’s personal career and journey beyond the U.N.

What many people may not know about Ban is that he has had a long, personal connection to the university. When he was in high school, over 60 years ago, his first penpal was a college student from the university.

The Biden Institute’s Vice Chair, Valerie Biden Owens, facilitated the discussion with Ban by posing several questions about his path to becoming secretary-general, his time at the UN and his thoughts on the current state of international affairs and the United States’ role within it.

Biden Owens and Ban met previously in 2016, when they both served in the U.N. Ban was at the end of his second term, and Biden Owens was serving as the U.S. Senior Advisor to the United Nations General Assembly.

Biden Owens kicked off the discussion by asking Ban what he was “most proud of.” 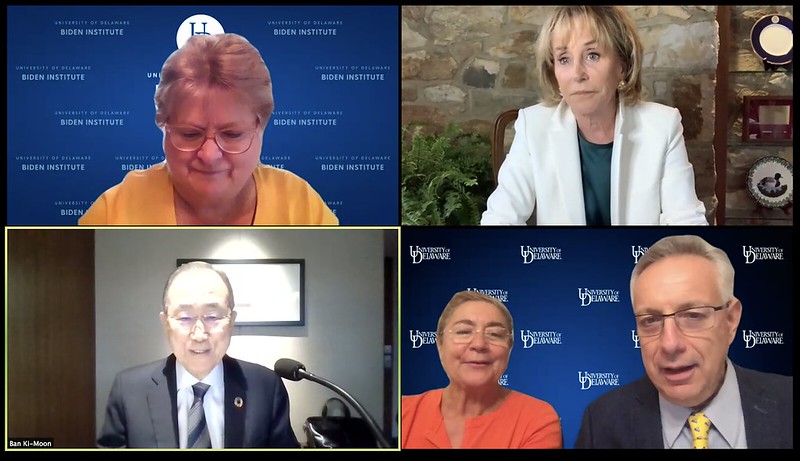 Ban said that he considers himself “the hardest working secretary-general in U.N. history,” a title he believes he deserves and is credited to his demonstrated commitment for public service during his time leading the U.N.

Other key accomplishments he is proud of include the U.N.’s “17 Sustainable Development Goals by 2030” that strive to create a happier, healthier and safer world. Further, the historic Paris Climate Accords, signed on Dec. 12, 2015, was mentioned as one of Ban’s proudest achievements. He proceeded to commend President Obama and Vice President Biden for embracing China’s President, Xi Jinping, in order to reach an agreement.

Ban delivered a warning to the university students attending the virtual event, touching upon what the Paris Climate Accords attempted to resolve.

“I want to emphasize to young students — we cannot go on this way,” Ban said. “Climate change is the most pressing concern facing humanity today.”

Biden Owens built off of Ban’s warning to touch upon the catastrophic effects of climate change on America today.

“We have so many more wildfires, flooding, hurricanes in this country,” Biden Owens said. “Americans represent 4% of the global population, yet we create 15% of global emissions.”

Biden Owens proceeded to thank Ban for his “instrumental role in the Paris Climate Accords.” Ban then elaborated on how he had to negotiate with many world leaders and got almost every single nation to handwrite their commitment to end climate change.

Biden Owens furthered the discussion, asking Ban where he thought the U.S. and the world are in the current fight against climate change.

“The Pope told me last April, ‘God always forgives, but nature never forgives,’” Ban said. “As someone who worked really hard for the Paris Climate Accords to be successful, I was deeply concerned and angry when Trump announced he was pulling out of the treaty.”

Ban mentioned that when Trump was visiting the California wildfires, he still denounced climate change as the cause for the increase in natural disasters such as the wildfires.

“How can a U.S. president say something so wrong against science?” Ban said. “I am stunned.”

Biden Owens proceeded to ask if there was anything Americans and global citizens could do other than “pray that we get a Plan B,” to which Ban responded with news he said he has found “encouraging.”

“Now more than ever, many Americans are realizing that we can’t go against nature and scientists,” Ban said.

He encouraged global leaders to listen to scientists and the young people who are speaking out and urging their leaders to leave them with a better plan to inhabit.

“I think Trump is one of the very few skeptics and deniers of climate change left,” Ban said. “His vision is very short-sighted, economically irresponsible, morally wrong and also scientifically very wrong.”

Biden Owens touched upon the difficulties many at home may be experiencing due to the coronavirus pandemic, stating it’s “hard for all of us to focus on the global issues, such as refugees.” She asked Ban to discuss how refugee issues affect everyone, whether they’re “in Newark, Delaware or somewhere else in the world.”

“There are more than 70 million refugees globally, in the 21st century,” Ban said in response. “This is unbelievable in a time of highest prosperity and technology — the only other time that happened was during World War II, so why are there so many refugees during the 21st century peacetime?”

Ban went on to talk about his own personal experience as a Korean refugee and why in general, refugee issues are so personal and important to him.

“Refugees like me in Korea, because of life and poverty, are seeking better opportunities because they cannot live in their home countries,” Ban said. “We have to take care of them wherever they may resettle, but unless other countries like the U.S. and EU members support these refugees, they are helpless.”

Ban continued on to detail his firsthand experience visiting refugee camps around the world.

“The U.S., under Trump, has defunded support for refugees,” Ban said. “I sincerely hope the United States can show global leadership again.”

Ban then thanked Biden Owens as a former member of the Security Council for her generosity regarding humanitarian issues.

Addressing the hundreds of university students attending the virtual event, the conversation turned to whether Ban would encourage young people to follow in his footsteps and join the Foreign Service.

“Working as a diplomat can be a really good way for any young person to contribute to global peace and development,” Ban stated. “Our young people are the most extensive, the most considerate and the most just when it comes to understanding social justice in today’s world.”

Following her questions, Biden Owens thanked Ban for his time.

“You are a diplomat and a statesman, that’s getting to be a rare combination in today’s world,” Biden Owens said. “You wear them well and with dignity. Thank you.” 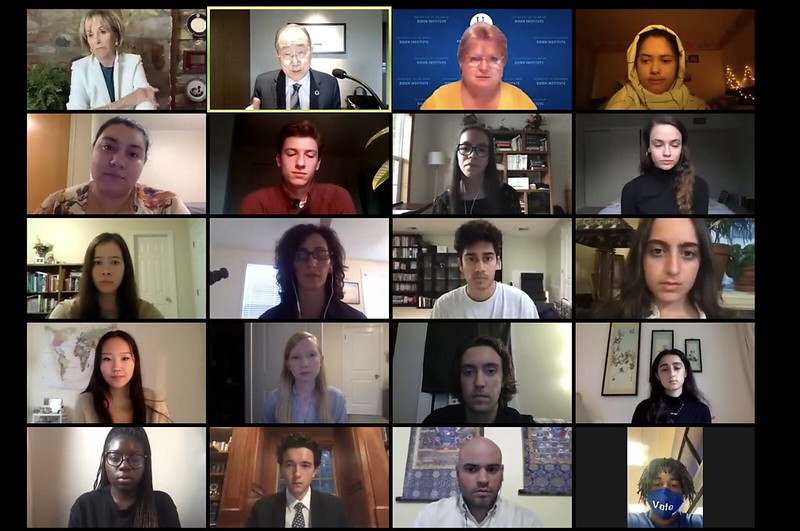 ​​Anya Sen​/THE REVIEW
From left to right on the top row, pictured are: Valerie Biden Owens, Ban Ki-moon and Cathy McLaughlin, as well as several university students in attendance at the event.​

“This is very worrisome,” Ban said. “Trump is not listening to the advice of scientists and the warnings of nature [in regards to climate change].”

Prompted by another student question, Ban touched upon his stance on gender equality by discussing one of the nation’s more recent political events: Vice President Biden’s selection of Senator Kamala Harris as his running mate in the upcoming general election.

“Use your capacity to speak out to the world to ensure that we make this world better for women,” Ban said. “Joe Biden has chosen Senator Harris as his running mate, and I’m sure that he will do much more for women’s empowerment from all of the time I spent working very close with him during his time as vice president.”

Ban concluded the discussion with a brief summary of his sentiments on the current direction of America’s politics.

“I hope Americans will make the wise choice for their next president,” Ban said.