A nod to the Stone Balloon, famed Main Street fixture 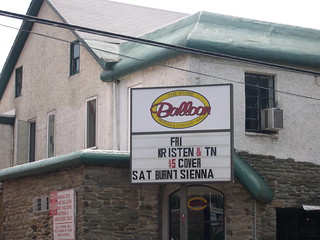 Courtesy of Stank (class of 2005) via MugNight.com
The original Stone Balloon on Main Street. The building was demolished in 2006, says Darren Kane (class of 1995).

An iconic name has returned to Main Street. Following a renovation this winter, 16 Mile Taphouse is now the Stone Balloon Ale House—an homage to a bar and concert venue that opened in late February of 1972.

Bill Stevenson opened the original Stone Balloon on Main Street when he was in his early twenties. His goal was to create a place in Newark where people could go to hear great live music—which, at the time, was only available at the oft-crowded Deer Park Tavern.

The Stone Balloon’s demographic, Stevenson says, varied by night. Monday nights were for performances by local bands, so the crowd was also comprised of locals. Friday and Saturdays saw college students and professionals alike. But Stevenson says the Balloon was best known for its Tuesday night events.

Tuesday nights were “concert nights” which Stevenson says drew crowds from Baltimore and Philadelphia, as well as from southern New Jersey and—on occasion—D.C. By Stevenson’s estimation these events typically brought in about 1,200 people, sometimes shutting down Main Street. He says he always made sure to have a musician or DJ on the bar’s stage, which he says was “the heart of the Balloon.”

The concerts are among Stevenson’s favorite memories of the Stone Balloon. In 1974, he convinced Bruce Springsteen and the E Street Band to perform.

“Life changed,” he says. “That was an amazing night, because I just knew for some strange reason. We had done a couple concerts; we’d done a couple different shows. We’d had some great bands in there, but Bruce changed everything.”

As Springsteen’s music received more attention, Stevenson says the Balloon benefitted from the publicity as well, which led to calls from various booking agencies for other nationally touring bands. This allowed the Balloon to host artists like Pat Benatar and Robert Palmer, among others.

Today, Main Street does not have a venue that could accommodate a band stopping by on its national tour—and Stevenson says he does not believe such a place will be possible again in the area. Not only are expenses high for venue owners and concert-goers these days, but the convenience of the Internet has also affected the way people seek out live music, he says.

Stevenson says the rise of MTV in the early ’80s had a lasting impact on business. When bands became famous for their music videos, they no longer needed a live venue.

“It’s so expensive to be out there traveling and touring,” Stevenson says. “You need a bigger venue. And that’s why […] some of these places that did live entertainment, they’re just not around anymore.”

Still, the Balloon’s legacy lives on, in part through stories shared by university alumni on Mugnight.com, a website created by Darren “Digger” Kane (’95). Alumni can post on the site and reminisce about their time at the Stone Balloon and at the university in general.

Kane visited the Balloon as a student, and recalls seeing local acts like Love Seed Mama Jump. He says that the Stone Balloon’s closing in 2005 marks the shift between the old and the new on Main Street.

Current manager Phil DiFebo, who has been at the restaurant since August, says that the Stone Balloon’s new reputation will rest on its menu of comfort foods and various beers, “and hopefully great company.”

Both Kane and Stevenson agree that the era in which the original Stone Balloon was able to thrive is over. However, neither says so bitterly.

“A lot of people are embracing the new Stone Balloon Ale House, but there [are] some people who aren’t so happy with it,” Stevenson says. “[…] I just wish that all those people would embrace the new place and support it. I just love the idea that the Stone Balloon name is back on Main Street.”