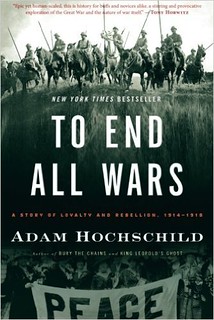 Nearly 20 million people died as a result of World War I, including soldiers and civilians, and this was six times more than any previous war. History books will often highlight the fallen war heroes, but not the ones who advocated peace.
With the 100th anniversary of World War I upon us, author and journalist Adam Hochschild visited the university to speak about the peacemakers that often go unnoticed in war history.

The university’s history department invited Hochschild to speak in Purnell Hall. Arwen Mohun, the department chair, had been looking for someone to come speak about the war on campus while the department celebrates the anniversary of the war.
Prior to his lecture, Hochschild, 72, also spoke to history and journalism classes, and he held a reception after his lecture.

“We’re getting a lot of bang for our buck with having him here,” Mohun says.

Hochschild has written eight books, and his best-known works include “King Leopold’s Ghost” and “To End All Wars: A Story of Loyalty and Rebellion,” which both document people who rebelled against slavery and war. In his lecture, Hochschild talked about anti-war movements and highlighted characters who were imprisoned, and sometimes exiled for their socialist beliefs.
During his speech, he laid out three illusions that the war was based on: that the war would be quick and easy, that they would be shooting at the enemy (but the enemy would not shoot back) and that the cavalry itself could play a role in industrialized warfare.

These illusions arose from all previous experience in colonial wars, but were shattered by the inventions of barbed wire and the machine gun, according to Hochschild.

Hochschild believes that WWI did not have to happen, but with propaganda in various countries, it made civilians believe war was necessary and evoked a sense of guilt if they did not support it.

In his writings, Hochschild documents several people from Russia, Great Britain and France who actively opposed the war while they were on battlegrounds. He showed a series of photos where German and Russian soldiers posed together and were even dancing with one another.

Another perspective was relationships between fathers and sons. He talked about how some army generals and captains wanted their kin to fight in the war, and the ones he wrote about all died in combat.

“Why would men send their own sons into battle knowing that they would die?” Hochschild asked the audience.

Another character he discussed was a French socialist named Jean Jaures, who openly resisted the war and was assassinated three days later, while his killer was found not guilty.

He mentioned how most resisters came from countries who were not attacked during the war.

“Britain itself was not attacked,” Hochschild says. “It is very hard to be a war resister when your own country is attacked.”

After his speech, Hochschild opened the floor for questions, and one audience member asked if Hochschild himself was a pacifist. He said he was about 90 percent pacifistic, and believes that defending your country when attacked is sometimes necessary.

“People always say that going to war is something that is going to solve a problem,” Hochschild says. “When it almost always creates problems that are far beyond measure.”

The perspective of anti-war movements is rarely in the forefront of history, but Hochschild believes it is just as important.
“My hope as we look back at this war 100 years later is that we remember not just the politicians, and not just the heroes, but those that tried to stop the war,” he says.