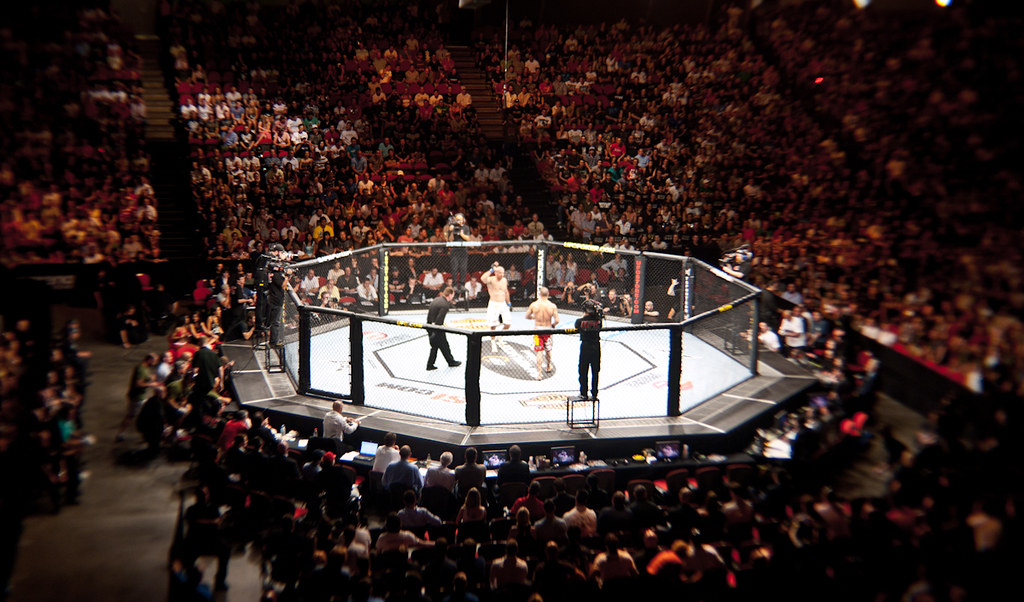 Courtesy of Creative Commons
Joe Edelen takes a look at the upcoming UFC fight between Khabib Nurmagomedov and Justin Gaethje.

In the Republic of Dagestan, which is an autonomous district of Russia, it is a frequent occurrence to see groups of young men stretching and running along the shores of the Caspian Sea as they prepare for a long day of grueling training.

The rich Dagestani culture molds many young men by introducing them to the sport of wrestling, as various prominent grapplers have often come out of the district.

One of these grapplers just so happens to be one of the greatest Ultimate Fighting Championship (UFC) fighters of all time: Khabib Nurmagomedov.

On Oct. 24, Nurmagomedov will embark on his next challenge, as he fights the No. 1 contender for his Lightweight Championship, Interim Lightweight champion, Justin Gaethje.

Nurmagomedov sits at a perfect 28-0 in his professional mixed martial arts career, a remarkable feat for any fighter in any combat sport. Even with his perfect record, Nurmagomedov’s resume is just as impressive.

Out of his 28 professional wins, Nurmagomedov has defeated the likes of Al Iaquinta, Edson Barboza, Michael Johnson and former champions such as Rafael Dos Anjos, Dustin Poirier and Conor McGregor.

Nurmagomedov has a unique style of fighting that has devastated the UFC’s lightweight division since his debut for the promotion in 2012.

The fighting style of Nurmagomedov is heavily based around his wrestling, sambo and judo training and focuses on draining his opponents energy and confidence. Nurmagomedov is a skilled striker, but he wins his fights on the ground, where he often mounts his opponents while tying up their legs. Once he takes his opponents’ legs out of the equation, Nurmagomedov will control at least one of the opposing fighters’ arms, a tactic that’s referred to as the “Dagestani handcuff”, leaving his opponent with no chance of escaping his grasp.

Nurmagomedov’s signature mauling has made him unbeatable to this point in his career, and it is something that Gaethje will have to account for ahead of their bout at UFC 254.

Gaethje’s style of fighting could not be any more different than Nurmagomedov’s, though his skill set makes for an interesting match up against the reigning Lightweight champion.

Most fighters will lean into their strengths and develop their mixed martial arts around those strengths, but for Gaethje, that does not apply.

Even as a former All-American wrestler at the University of Northern Colorado, Gaethje prefers to not take his opponents to the ground like Nurmagomedov. Gaethje utilizes his wrestling skills when needed, but he prefers to stand up with his opponent and out-strike them.

Nurmagomedov’s manager, Ali Abdelaziz, recently spoke about his client’s upcoming title defense against Gaethje, as well as what the future holds in an interview with ESPN’s Brett Okamoto.

Nurmagomedov and Gaethje have limited common opponents, however, former Interim Lightweight champion, Dustin Poirier, has been in the octagon with both men.

Nurmagomedov’s last fight was on Sept. 9, 2019, in Abu Dhabi against Poirier, a fight in which Nurmagomedov came out victorious after a third round rear-naked-choke that nearly made Poirier unconscious.

Gaethje comes into his bout against Nurmagomedov with a record of 22-2, one of those losses coming at the hands of Poirier, quite literally. Poirier won from a fourth round technical knockout (TKO) and handed Gaethje his second career loss. The fight was a slugfest, and even in defeat, Gaethje’s performance was impressive.

“If Justin can keep his back off the fence, he can out scramble Khabib in the open … You know, he just has such a pedigree in collegiate wrestling that the open mat area is gonna be where Justin shines. But if Khabib can get him against the fence, I believe Justin will be in trouble.” Poirier said in an interview with TMZ Sports in July.

Gaethje will pose as one of Nurmagomedov’s toughest challenges in his career, and the bout is one of the few times where Nurmagomedov is not the unanimous favorite, as many believe Gaethje has a real shot at dethroning the champion.

The upcoming fight for the UFC Lightweight championship is generating a lot of buzz already, as this fight is one of the biggest of the year.

Nurmagomedov’s path to 29-0 will have the attention of the entire mixed martial arts world, including one of the all time greats: Georges St. Pierre.

For years, there have been rumors of a potential super fight between Nurmagomedov and St. Pierre, and it would be a dream fight for fans of mixed martial arts.

Both Nurmagomedov and St. Pierre are widely considered to be two of the best fighters in UFC history, and should Nurmagomedov improve his record to 29-0, he anticipates that a super fight between the two will be the final fight of his career.

“I think Khabib wants to make that fight at 155lbs, I [have] never fought at 155 … I can surely do 155 because I’m not a big welterweight, but the problem is I’ve never been there, so maybe my performance may be compromised.” St. Pierre said, regarding the potential super fight.

St. Pierre fought as a welterweight for the majority of his career, and Nurmagomedov has primarily fought as a lightweight, so the two would have to come to an agreement on which weight class the fight would be.

“It would be [an] honor for me to share Octagon with one of the greatest fighters of all time. Let’s do it 155lbs, or I give away 5lbs to you, cause you [never] done 155. Well, it’s your choice 155 or 160, Montreal, NYC, Moscow or Abu Dhabi. Send me location my friend” Nurmagomedov said in an Instagram post.

The rumored super fight between the two has picked up steam since last year, but now Nurmagomedov is eyeing the fight against St. Pierre more than ever.

“This is a fight between my dreams and my father,” Nurmagomedov said.

Khabib’s father and coach, Abdulmanap Nurmagomedov died on July 3 at the age of 59. Abdulmanap contracted COVID-19 in May, and the virus worsened his pre-existing heart condition.

The death has obviously been very difficult for Khabib, but he plans to fulfill his father’s dream of finishing his career with a record of 30-0 and defeating the legendary St. Pierre.

“Khabib’s father had a certain legacy that his son wanted him to have. [Khabib] can retire now and have the biggest legacy we’ve ever seen. But [he has] certain goals, like 30-0 or fighting Justin [Gaethje] then after that Georges St. Pierre.” Abdelaziz said.

Nurmagomedov has methodically planned how he envisions the future, as well as the end of his fighting career, a luxury that fighters dream of.

First, however, Nurmagomedov will have to conquer his first task, which is defeating Gaethje.

The fight is scheduled to take place on Oct. 24 at UFC’s Fight Island in Abu Dhabi. Nurmagomedov and Gaethje are main eventing a stacked UFC 254 card, a spot on the card that both men are used to.

Despite the outcome of this fight, Nurmagomedov has already cemented himself as one of the greatest fighters in the history of combat sports. The fight against Gaethje will be Nurmagomedov’s first without his father in his corner, but he will strive to fulfill his father’s dream of finishing his career at a perfect 30-0.