Album Review: Farewell & “Thank you for your service”, A Tribe Called Quest 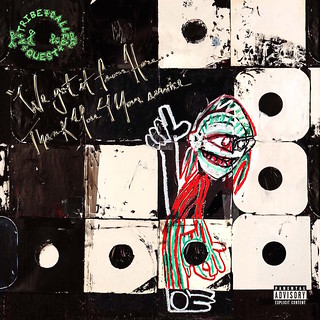 I don’t usually ask for much for Christmas, but last year one thing I did want was a turntable vinyl record player. My parents gave me a Crosley briefcase player, a Kanye West vinyl album and some of their hand-me-down records from when they were my age (Michael Jackson, Earth, Wind & Fire and Stevie Wonder, just to name a few).

I soon wanted to start collecting my own records. The day after Christmas, I went to 2nd & Charles to purchase my first vinyl record. It was A Tribe Called Quest’s “Midnight Marauders,” which was released in 1993, the same year I was born.

This past Veterans Day, A Tribe Called Quest (ATCQ) released their new and final LP, “We got it from here…Thank you 4 your service.” The group consists of three active members (Q-Tip, Ali Shaheed Muhammad, Jarobi White) and the late Phife Dawg, who passed during the making of the album earlier this year.
The New York-based hip-hop collective, who have not released an album in 18 years, are known for their unique production, impressive lyricism, feel-good vibes and their impact on so many rap artists we hear today. They are also affiliated with the international Afrocentric hip-hop awareness group, “The Universal Zulu Nation,” founded by hip-hop pioneer Afrika Bambaataa in the 1970s.

With Donald Trump as our new president-elect, this record was well-timed and important for the culture. ATCQ is considered “underground hip-hop” and was most prominent in the early 1990s, but your favorite rappers today are more than likely influenced by these guys (except Lil Yachty, maybe).
The features of this album are unlisted on streaming services, but they are certainly not lacking. Long-time collaborators Busta Rhymes and Consequence appeared on multiple tracks, as well as rock-influenced guests Jack White and Elton John. They also got assists from hip-hop heavyweights like Kanye West, Kendrick Lamar, André 3000 and Anderson .Paak.

“We got it from here” encompasses Tribe’s signature sound of smooth soul samples, rhythmic hip-hop drums, synthesizer chords and funky bass grooves. They stay true to their original style while also being relevant and sonically innovative.
The raps on this album are truly what separates ATCQ from other hip-hop artists. Their methods of exchanging bars with one another as showcased on “Solid Wall of Sound,” and “Dis Generation,” essentially sharing verses, sometimes with four rappers at a time. This rhyming style is reminiscent of Tribe’s classic hit, “Electric Relaxation.”

There is a lot of racial and socio-political commentary in the lyrics on their new release, as well.

“We go-getters, don’t be bitter ‘cause we not just n—–s,” Q-Tip rhymes in the intro track “The Space Program” and continues in the chorus, “there ain’t a space program for n—–s, yeah you stuck here n—a.”

In the Kendrick Lamar-featured “Conrad Tokyo” the late Phife Dawg provided some commentary about the election before he even had the chance to see the results, possibly alluding to how the media made the candidacies out as a joke.
“CNN and all this shit, gwaan [go on] move with the f—ery, Trump and SNL hilarity,” Phife said. “Troublesome times kid no times for comedy.”
One of the more powerful songs on the record though, is “We the People….,” a brutally honest, militant and forthright musical statement on the current climate of America.

“All you Black folks you must go,” Q-Tip sings on the chorus, repeating the same line with Mexicans and poor folks, “Muslims and gays, boy we hate your ways.”

This sounds like an ironic response to the way Donald Trump is perpetuated in the media as racist and xenophobic.

The album is in two parts, presumably split between “We got it from here” and “Thank you for your service.” It seems like a passing of the torch to the new generation of hip-hop while bringing the die-hard ATCQ fans a proper farewell, as well as some of the final verses we’ll get to hear from Phife Dawg.

This album was a great way to go out for ATCQ, who will maintain their legacy and impact on hip-hop for years to come. If you aren’t familiar with them but love great raps and great production, this album is a must-listen.