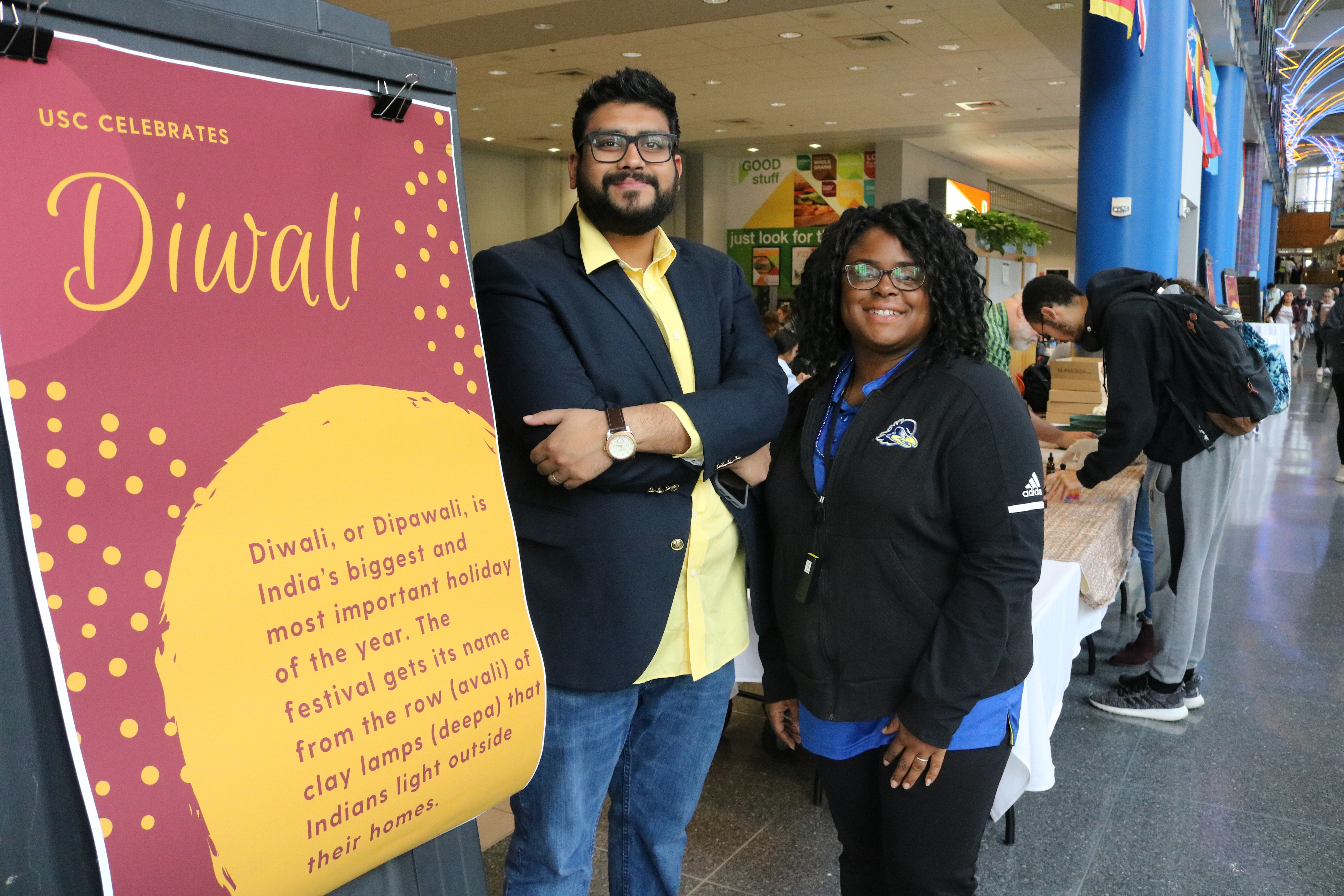 Kayleen Aures/THE REVIEW
Organizations such as the USC typically hold events, such as the one pictured above, to celebrate Diwali, but were unable to this year due to COVID-19.

On Nov. 14, many Indian families gathered to celebrate Diwali, the Indian festival of lights. However, the five-day festival had to be altered this year due to the ongoing coronavirus pandemic.

According to a USA Today article, Diwali typically involves puja, or ceremonial prayer and lighting firecrackers, candles and clay oil lamps called “diya.” People also decorate the floor with designs called “rangolis,” which are ornate floral patterns made out of a colored powdered chalk. Meals usually include “traditional sweets and savory items.”

Since India has a large and diverse population, there are myriad regional variants of the holiday, particularly involving which deity is worshipped. Even though most of the celebrations follow similar core traditions that USA Today reported, a “typical” Diwali celebration may vary by household.

Khushboo Verma, a doctoral student of biomechanics and movement science and the president of the Indian Graduate Student Association (IGSA), said that students “missed being home with family,” and that Diwali definitely felt different this year.

Verma said that if students were still on campus, the IGSA would host a university-wide Diwali event complete with traditional Indian food, attire, dance and even a DJ. Last year’s event had a total of 120 people in attendance. However, this year, the event was completely virtual and held over Zoom.

“We still reached out to some students who performed, which was really good, but I mean for the past few weeks, I have been seeing that people don’t really come to virtual events,” Verma said. “I understand that it’s difficult to keep watching the screen but [it was] just to make Diwali a little more traditional.”

According to Verma, IGSA reached out to the small number of students living in Newark and told them that they wanted to give them some “gift hampers” containing traditional Indian sweets among many other items. IGSA arranged for all of the gifts to be delivered to people’s doorsteps, while its members wore masks and maintained social distancing.

“I personally felt like we did something on Diwali to make [students] feel at home,” Verma said. “After receiving the gifts … they really showed up at the virtual event. We just had a big open discussion to just talk about Diwali and Indian culture.”

According to Verma and Kadiyala, Diwali would normally entail celebrating together with several other families and going to the Hindu temple for puja. However, neither occurrence is possible given social distancing protocols and limits on indoor gatherings.

Verma felt that not being able to meet with her friends was “sad” and that she “tried what she could.”

“What my family does is [puja] in the day or in the morning, and then at night we would invite a lot of families to our house for dinner or we would go to someone else’s house for dinner,” Kadiyala said. “We wouldn’t normally go out into someone’s backyard or even on the street.”

Instead, Kadiyala and her family set off some sparklers and fireworks outside. They also drew some rangolis on the doorstep and sidewalk.

“I’m lucky enough to live in a neighborhood that has Indians on our street, so we were able to go out and socially distance and just do our own thing with the sparklers,” Kadiyala said.

Verma said that her personal Diwali celebrations were pretty simple. She and her partner just ordered some Indian food and watched an Indian movie on Netflix.

“I didn’t really get a chance to do anything traditional this year, but hopefully things will be better next year; and I’m looking forward to a better year,” Verma said. “And then again, it’s a festival of light, so it’s really nice to see everything bright on a normal day.”

Kadiyala is also the president of the Indian Student Association (ISA), an all-inclusive Registered Student Organization (RSO) that represents the Indian and South Asian population at the university. If students were on campus, the ISA would also host events, sometimes in conjunction with IGSA, to teach the student body about Indian culture as well as celebrating traditions and holidays such as Diwali.

These events are often arts and crafts sessions in which participants learn how to decorate diya candle holders and draw rangoli art, Kadiyala went on to say.

“Diwali is the major festival of India and it’s celebrated by so many different religions,” Verma said. “I was talking to a friend who’s Muslim and I asked, ‘Did you ever celebrate Diwali back in India?’ and he said, ‘All the time.’ So it’s an event that brings all the religions and cultures in India together.”

CORRECTION: A previous version of this story incorrectly referred to the Indian Graduate Student Association (IGSA) as “Indian Student Graduate Association (ISGA).” This was corrected as of Tuesday, Nov. 24 at 10 am.

Joe Edelen, Patrick LaPorte, and Konner Metz of The Review preview the season opener, as well as how the Blue Hens roster stacks up as they prepare to return to game action for the first time since 2019.
Read more
Arts and Entertainment

Seeing as the second film didn’t quite live up to what I had hoped, I was apprehensive with whether the third one would continue the decline or if it would be an improvement.
Read more