No one in the political world was expecting a bombshell to drop when they woke up on the morning of Nov. 29. That was until the press was made aware of breaking news regarding the investigation by Robert Mueller, the special counsel.

The news was that President Donald Trump’s former personal attorney, Michael Cohen, was about to plea guilty to lying to Congress.

That means that Cohen “knowingly and willfully made a materially false, fictitious, and fraudulent statement and representation” in an August 2017 letter to the Senate Select Committee on Intelligence and the House Permanent Select Committee on Intelligence. It was regarding an effort to build a Trump Organization real estate project in Moscow, Russia, that the plea document refers to as the “Moscow Project.” Such false statements did not have to be under oath.

In federal court, Cohen said that he did so in order to protect Trump personally and to protect the prospects of his campaign.

This development in the Mueller investigation directly implicates Trump himself in dealing with the Russian government deep into his eventually successful presidential campaign, throughout which he denied doing so. He and many other campaign officials, such as Donald Trump Jr., Kellyanne Conway and Paul Manafort, maintained often that there was no contact at all between the candidate and the Russians.

“This is yet another example of the President’s closest allies lying about their contacts with Russia,” Sen. Mark Warner (D-Va.), ranking member of the Senate intelligence committee, said in a statement. “With each indictment and each guilty plea, we learn more about the President’s connections to Russia in the midst of Russia’s efforts to interfere in the 2016 election.”

According to the plea document, which was signed by Mueller, Cohen made false statements on three topics.

Additionally, as late as June 2016, Cohen had discussed the project with someone identified as “Individual 2” in the document. That person is thought to be Felix Sater, the managing director of the real estate company Bayrock Group, who worked as an FBI informant against the Russian mob in the 1990’s.

Cohen also had talked about the project with “Individual 1” — who is known to be then-candidate Trump — more than the three times that he first claimed to. The plea document also says that Cohen “briefed” members of Trump’s family.

Cohen’s third false claim was that he did not recall any contact with the Russian government with regard to the project. He told Congress that he had sent an email to Dmitry Peskov, Russian President Vladimir Putin’s press secretary, but had received no response.

The truth was that on or around Jan. 20, 2016, Cohen had been contacted by Peskov’s personal assistant and then spoke to her on the phone shortly after for 20 minutes. The plea document then states that Peskov’s assistant had taken notes during the call and would follow up with other officials in the Russian government.

Additionally, Sater told Buzzfeed News that Cohen had offered a penthouse suite in the planned 100-story building to Putin through Peskov’s office. That penthouse is thought to have been valued at $50 million. It is not clear if Trump himself knew of the offer.

Since the news about the plea became known, Trump has said that Cohen is lying in order to get a lighter sentence. Also, Trump has said everything about the deal was public, and has pointed out that the project never started — it was just talked about.

Trump was still denying that he had dealt with the Russians after he assumed the presidency.

Based on the information given to the special counsel by Cohen, we now know that he did not “stay away” at all. Though a deal was never struck with the Russians, it was actively being negotiated throughout the 2016 primary season.

“Against all odds, I decide to run for President & continue to run my business-very legal & very cool, talked about it on the campaign trail,” Trump said over two tweets. “What he’s trying to do — and it’s very simple, he’s got himself a big prison sentence and he’s trying to get a much lesser prison sentence by making up a story.”

“Michael Cohen’s indictment and guilty plea is once again an example that you cannot lie to Congress without consequences,” Sen. Richard Burr (R-N.C.), the chairman of the Senate intelligence committee, said in a statement. 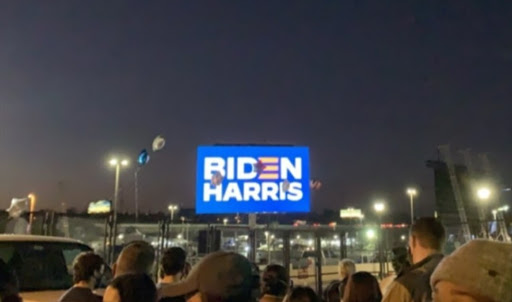 After a tumultuous election cycle, President-elect Joe Biden formally addressed the nation for the first time since his victory on Saturday night.