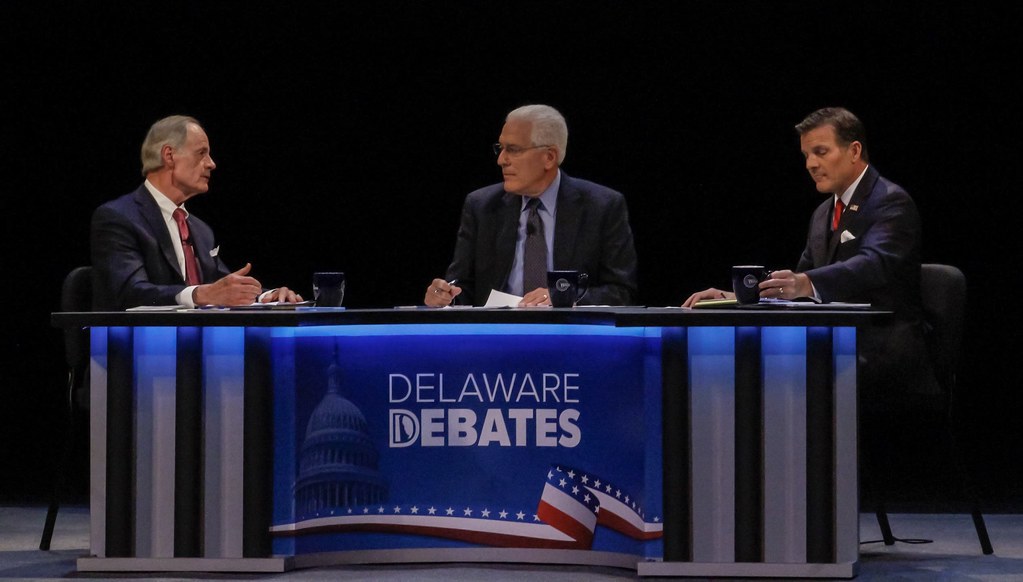 For much of his political career, U.S. Sen. Tom Carper has dealt with, and often settled, allegations of domestic abuse from his first marriage, publicly admitting to and apologizing for the incident that took place decades ago.

Rob Arlett, however, the Republican U.S. Senate nominee for the 2018 Midterm elections, did not find the matter settled. Before a full Mitchell Hall audience at tonight’s Delaware Debates showdown, Arlett mentioned the incident, eliciting a fiery response from Carper in just one of what would be a evening of pointed attacks between the two.

The two U.S. Senate candidates met for the second installment of the 2018 Delaware Debates, with election day looming just 20 days away, to debate topics ranging from civil rights, to universal healthcare to climate change, in which candidates responded to questions submitted by university and Delaware State University students.

One major topic of debate concerned the civil liberties of the LGBTQ+ community, which has faced ongoing uncertainty and fear under the Trump administration, particularly in the realm of education, where accommodations for LGBTQ+ students have been threatened.

Arlett, citing family members and friends who are members of the community, said that he is supportive “with regard to the gays.”

Carper’s support, when asked if he supports rights for LGBTQ+ students, was less elaborate.

“I do,” Carper responded.

With respect to Deferred Action for Childhood Arrivals (DACA) students, known as “Dreamers,” whose safety and status in the country has been precarious since Trump took office, Arlett does not believe that Dreamers should receive financial aid that others do not.

“That would be called discrimination,” Arlett said.

On the topic of Dreamers and illegal immigrants more generally, Carper voiced his support, noting that many immigrants receive their education here, work here and are devoted to the country, and that it would be “economic insanity” to deport hundreds of thousands who are willing to work currently unfilled jobs.

Arlett consistently sought to frame Carper as an outdated, establishment politician, much as Carper’s primary opponent, progressive Democrat Kerri Harris, did previously. Citing Delaware’s sufferings from the opioid crisis and the vast power of Big Pharma in the healthcare sector, Arlett criticized Carper’s campaign funding sources, which can be traced to pharmaceutical companies.

Carper — who did not deny the funding, noting that his campaign financing is public and fully disclosed — did promote amending the Constitution to overturn Citizens United, and argued that, because of the current structure of campaign financing, “dark money can seep into campaigns.” 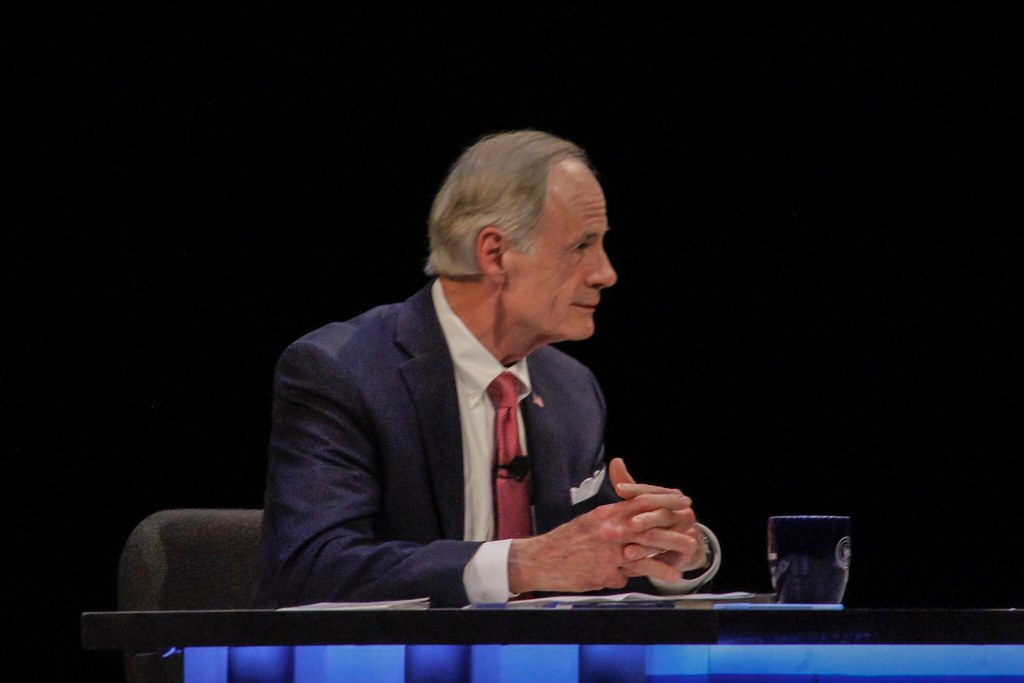 Carper has received criticism throughout his campaign over his vote to approve Kavanaugh’s appointment as a federal judge 12 years ago. According to Carper, who did not support Kavanaugh’s Supreme Court nomination, trusted colleagues had convinced him that Kavanaugh was a qualified nominee years ago. He warned that Kavanaugh has not demonstrated that he believes in the right of agencies such as the Environmental Protection Agency (EPA) to regulate, and that Kavanaugh has “voted the wrong way 90 percent of the time.”

Arlett, by contrast, expressed sympathy for Kavanaugh, who he believes was wronged in a last-minute political stunt by Democrats to advance allegations that Kavanaugh sexually assaulted Christine Ford in high school.

“That poor man and his family underwent a lot,” Arlett said.

Mitchell Patterson and Brandon Holveck discuss Rob Arlett's "with regard to the gays" comment and attacks against Tom Carper's past from the Delaware Debates.

Both candidates, though, agreed that “no president is above the law,” responding to a question about how sexual misconduct allegations against Donald Trump should be dealt with.

Recent speculation over the findings of the Special Counsel Robert Mueller have introduced questions about whether sitting presidents are subject to normal legal standards.

Regarding the environment, Arlett said that the U.S. should not be a “police agent” for world environmental policy, but later confessed that he does “not know the details” of the Paris Climate Accords. 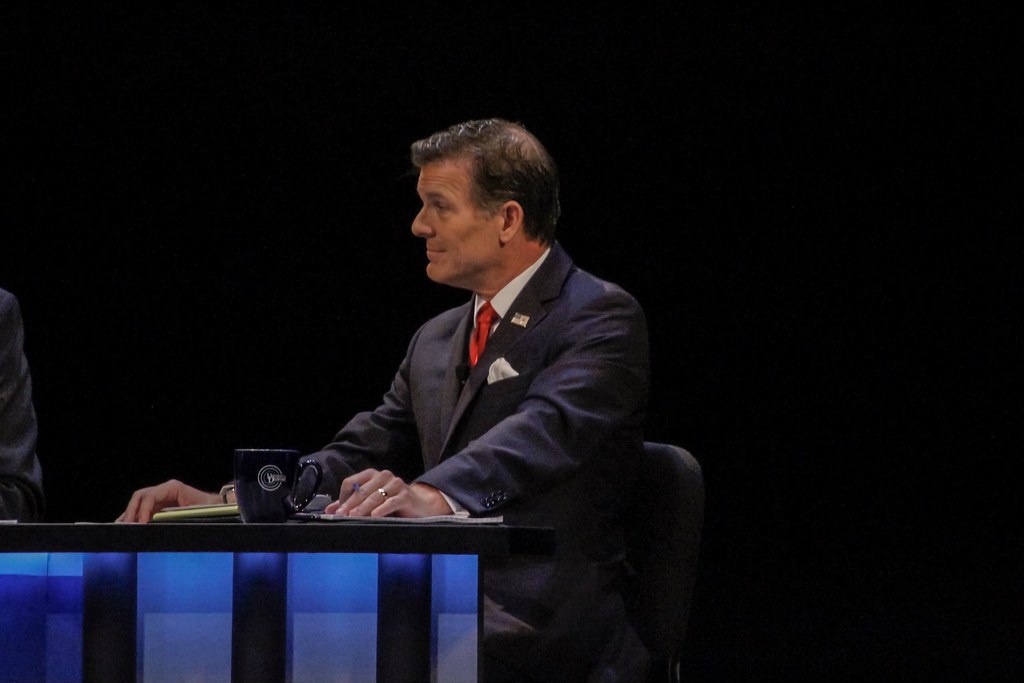 “Something’s happening here, and just what it is is pretty clear,” Carper said.

Analysis: Delaware Debates as Delaware as it gets

Both candidates agreed that the Second Amendment, another divisive political topic for the 2018 midterms, should not be repealed. Arlett believes that the Constitution already provides the means to enforce safe gun legislation. Carper, however, equipped with a copy of the Constitution in violation of debate rules, read the Amendment, finding no evidence for the legality of assault rifles and other firearms currently permitted for use in America.

While Carper believes in “common sense” legislation to regulate firearms, Arlett argued that the problem lays in the shooters, not what they shoot with.

“It’s not the gun, it’s the person,” Arlett said, noting that “anyone doing harm to another is mentally ill.”

Sen. Tom Carper: A conversation on his campaign and today’s politics