Astrology’s rise to popularity in the era of TikTok 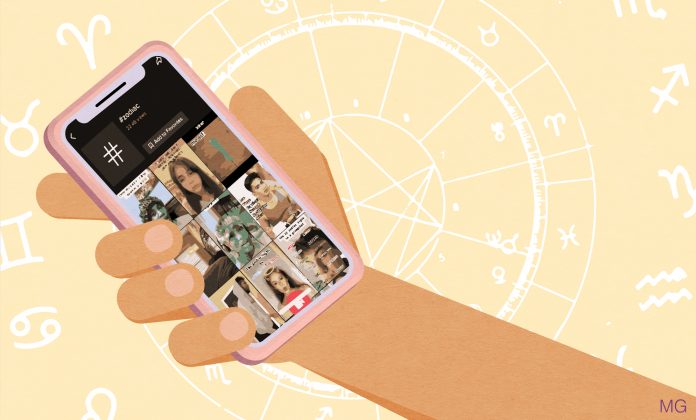 In times of quarantine, isolation and loneliness, many have found new fixations to fill their time with. As I scrolled through TikTok for admittedly too many hours a day, I developed a new obsession of my own: astrology. Prior to March 2020, I had limited knowledge about my own zodiac sign, but now, I find myself asking anyone who will comply for their detailed birth chart.

Now that I have become familiar with the signs and their stereotypical characteristics, I have developed a more detailed understanding of why people act the way they do. I will now glance at my attention-loving, exuberant and fiercely loyal friend and think, “Oh, she’s such a Leo.”

I am not unaccompanied in my discovery of this spiritual outlet. Through the rise in popularity of the social media platform TikTok, an abundance of subcultures formed on the app. One of which is home to many people who have developed an affinity for astrology, as it has become quite a viral sensation.

Astrology is not new to society, as people have been observing the stars since the dawn of time, and began naming the zodiac constellations in the Mesopotamian age, around 3000 BC. Each zodiac sign was said to take up one-twelfth of the circle of the Sun and Earth’s rotation. Yet this long history didn’t stop a new generation from diving deeper into all that the stars tell us about one another.

Experts say that Generation Z ranges from years 1995 to 2015. Within the majority of this generation, a new stereotype has come to fruition. There are still jocks, nerds and theater kids, of course. However, the self-titled astrologist has emerged into society.

They tend to analyze the birth chart of anyone who enters their path, attribute any personality traits to one’s sun, moon or rising sign and possibly have a distaste for a particular sign (I have a certain loathing towards Pisces men).

This new stereotype has been popularized in the media through TikTok and content creators like Eli Rallo (@thejarr on TikTok). Rallo, a 22-year-old journalism graduate student at Columbia from the Jersey Shore, amassed a following of 234,000 on TikTok for all types of content, many of it astrological. Her TikTok fame began in May 2020 when she accidentally uploaded a video of her family’s “The Jarr”, and it went viral because of its originality. Her account and online presence has been growing ever since.

“The Jarr” is a clear, glass jar that is consistently filled to the brim with a wide assortment of snacks from pretzels and cashews to cereal and candy, and it is a constant in the Rallo home.

Eventually, Rallo started to move away from solely “The Jarr” content and began to share more of herself with the TikTok world. She has made videos about her breast reduction surgery, her charcuterie board assembly skills and, of course, astrology.

“I was always trying to pull back from it [“The Jarr”] and figure out what I wanted with this platform because I wasn’t losing followers when I made other content,” Rallo says.

When Rallo saw that other videos she was creating were doing well too, she leaned into it. She didn’t completely abandon “The Jarr” but rather diversified her content creation. Her astrology content always seemed to be a crowd pleaser, and since she enjoyed creating it, Rallo continued on the path to become many users’ favorite TikTok astrologist.

Rallo was raised with a Catholic mother and a Jewish father, a situation which led to some internal confusion about religion as a whole. Being a very spiritual person, she was looking for an outlet to express herself in that way, even though she did not identify as religious.

“I feel very connected to the universe,” Rallo says. “I feel I’m a high vibration person.”

Upon following some astrology content pages on Instagram in the summer of  2019, Rallo realized her affinity for the subject and began to do her own research on the topic. At the time, she was also going through a breakup and astrology became something for her to lean on during that tumultuous period.

“I found so much space and growth within the realm of astrology and the planets,” Rallo says.

Astrology has helped Rallo in more ways than just personal growth and identifying with her spirituality. It helped her to understand more about the people she meets, on a much deeper level than what they are willing to divulge right off the bat.

Rallo feels that by analyzing someone’s birth chart she can get a better read of how they will react in certain situations and how they prefer to communicate. She realizes that some people are skeptical that their astrological birth chart can define their personality but her findings hold true in many interactions in her life.

TikTok and the internet have been a great tool for people to do more research on things that interest them. Although there can be misinformation, if you’re following reputable creators who really do their research, like Rallo, social media outlets like TikTok can be incredibly beneficial in developing your budding interests.

“Gen Z is looking to discard rigid religious sects, but I don’t think people realize that we have a hole in our lives for something spiritual, whatever that is,” Rallo says. “So, I think astrology fills a really nice spot for Gen Z.”

Rallo acknowledges that many other generations are incredibly skeptical about the truth to astrology, but Generation Z has embraced it tighter than any before them.

Jaclyn Grivas, a sophomore political science and history double major at the university, has become increasingly engrossed with astrology in the past year, along with many of her generational counterparts. Grivas first became interested in the stars in middle school, but astrology’s prominence on TikTok in the time since March 2020 led her to explore it in a deeper way.

“I never knew how complex everyone’s whole chart could be and how it can explain different parts of someone’s personality,” Grivas says, “I am always asking to see people’s birth charts to get a deeper understanding of who they are.”

Grivas says that if educated enough on the signs, a lot can be learned about your friends, family or love interests just from the analysis of their astrological chart.

As times of quarantine sparked many to reflect inward, Grivas used astrology to learn more about herself. It provided her with an avenue to look deeper within herself and the way she acts in a seemingly unbiased way.

“Astrology provided an outlet for self reflection and helps to teach me the areas within myself where I want to grow and become more evolved,” Grivas says.

Grivas and Rallo find common ground on the fact that a connection to spirituality definitely plays into astrology and one’s interest with the topic.

“It [astrology] can help you become self aware and in touch with the positive and negative parts of yourself and the universe,” Grivas says.

Upon my own acquisition of astrological knowledge, I, like many others, found myself attributing many of my personality traits to my zodiac sign. Yet sometimes I am forced to wonder if there is any truth to these associations between my star sign and my identity, as people can be very skeptical and close-minded about the topic.

However, when you look at astrology through a spiritual lens, there is much less weight placed on the scientific end of things. A main principle of religion is believing in something that you cannot see, and the same concept applies to astrology. There doesn’t need to be any scientific proof for something to ring true to a large group of people.