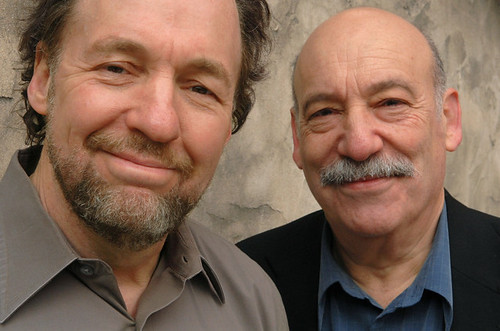 Courtesy of Temple University Press
Journalism professor Dan Biddle (left) came to the university straight from the offices of The Philadelphia Inquirer, one of the experiences he draws on as an educator.

After working at the Philadelphia Inquirer for more than 35 years, winning a Pulitzer Prize and writing a book, professor Dan Biddle came to the university to show journalism students how to get where he is today.

During his first year on staff, Biddle has taught various 400 and 300-level courses, from “Reporting and Race” to a more political scrutinization of the media, which would be expected from the old Inquirer political editor.

“I believe in mainstream media and I feel like there’s a lot of stuff from the media that I can teach and that I can learn from the students about social media as a form of medium,” Biddle says. “It’s important to teach at a high level and work hard in order to do it, write it, right.”

Biddle’s published book was a collaboration with Murray Dubin, entitled “Tasting Freedom: Octavius Catto and the Battle for Equality in Civil War America.” Along with having a huge interest in the political standpoint of the United States, Biddle also cares about making sure diverse voices are heard and understood.

“The book is about 19th-century civil rights struggles, which is far less known than other forms and the goal of the book is to show people what all of those men and women fought for,” Biddle says.

On top of balancing political reporting, encouraging diversity in the newsroom and within topics of the newspaper, Biddle also has a charismatic personality and cracks jokes about as many topics as he can lay his hands on. He’s a decent artist and he loves donuts from Beiler’s Bakery in Philadelphia.

“My students can tell you that I’m fond of drawing a map of Delaware or Pennsylvania, freehand, on the chalkboard and bragging about it while I smack the middle of them and say, ‘it’s not like I predicted a Trump victory!” Biddle says.

Biddle believes in teaching students about the who and now of journalism and reporting, how to write about data and polls, how to follow political distress, how to get a more diverse crowd represented and how to “write wrongs.”

While at the Inquirer, he worked under Executive Editor Gene Roberts whose years on the paper helped it win 17 Pulitzer Prizes, including Biddle’s. Biddle says there’s a documentary coming out soon about what that was like, in which you can see footage of Biddle and his investigative team pouring champagne on their heads after finding out they won the award.

Biddle is delighted to bring his experience, and people such as Gene Roberts to campus, who will be giving a presentation on May 11 in Gore 104 at 3:30 p.m. about covering race and civil rights over the years in the nation.

From winning awards, to working for what he calls “one of the best newspapers of all time,” to teaching and waiting in line for donuts for his students, Biddle brings enthusiasm to whatever job he’s doing at the time. He encourages students to work in areas they aren’t used to and to maintain a factual mainstream media.

“Journalism is under attack now more than it’s ever been — it’s a little unusual to be under such attack from the notion of fake news,” Biddle says. “The insistence of the President calling hard work ‘fake news’ is unjust — this is an important time to find the real fake news and write the right news.”