5. Chad Johnson- Twitter- @OchoCinco
Full disclosure: Ochocinco’s Twitter has gotten significantly less exciting since his August 2013 arrest for domestic violence. Nonetheless, if you have heard any of the stories about him on and off the field during his time with the Cincinnati Bengals, you know he is probably the most purely entertaining athlete we will ever see, and surprisingly, a genuinely funny person.

4. Jennette McCurdy- Twitter- @JennetteMcCurdy
This may come as a bit of a surprise considering the vast stupidity that was iCarly, but McCurdy, the show’s co-star, has built a fairly large cult following on Twitter. Now, some of us—sorry, them—are certainly just pathetic losers hoping she accidentally allows more leaked photos to hit the web. Other followers are waiting to see how she executes the transitioning out of childhood stardom, secretly hoping it’s more Miley Cyrus than Dakota Fanning.

3. Ken Jennings- Twitter- @KenJennings
Yes, that Ken Jennings. Most people who grew up with exceptionally dorky parents, including yours truly, know him as the guy who won Jeopardy! 74 days in a row. During his reign, he piled up $2.5 million and came severely close to giving my envious father a drinking problem. The main takeaway, though? My dad probably should not care about a game show that much, and the former contestant’s consistent Twitter witticisms are hilarious.

2. Gilbert Arenas- Instagram- @MrAgentZero
Gilbert Arenas is most notable for being a pretty good basketball player for a couple years and then bringing a gun into the team locker room over a small gambling dispute with a teammate (both are millionaires, by the way). But all was forgiven after his recent skewering of Indiana Pacers’ Statue and Center Roy Hibbert, who has laid more eggs than Mother Goose over the last three months and deserved to get ruthlessly bashed publicly.

1. Lil B- Twitter- @LILBTHEBASEDGOD
As far as rapper’s Twitter accounts go, there’s really only about four different options for the discerning tweeter. There’s the conventional, boring, promotional rapper’s Twitter that everyone should despise deeply. Then there is Kanye West, who normally appears every six months to string together 10 tweets that are horribly misguided and probably just factually wrong, but always entertaining. Then, there is Tyler, the Creator, whose caps-locked nightly diatribes can actually terrify you to your core, particularly if you listen to his music simultaneously. Then, the happy medium: Lil’ B. He’s not very talented, but his Twitter makes me feel warm inside. Check it out.

“I’m Shmacked” riot
Following a tweet that “I’m Shmacked”—a popular YouTube channel whose crew creates documentaries filming party scenes on various college campuses—would make a Monday night appearance at the university in early September, several hundred students reportedly gathered at a disorderly party at the house of several members of the rugby club. Police broke up the crowd, after which a mob of a few thousand students—several of them no doubt “liquid courage”-equipped—began swarming the surrounding area, namely South College Avenue and East Main Street. Dozens of police officers from various units arrived in an attempt to mitigate the madness. Several vehicles, signs and trash cans were damaged. Predictably, the event erupted in countless posts, photos and videos on every social media outlet imaginable. Rumors spread that a car had been set on fire, but police said they never encountered this. Arrests and behavioral sanctions were made—including the five-year suspension of the university’s rugby club. A letter condemning the ordeal was issued by President Patrick Harker and Provost Domenico Grasso.

The infamous “Grotto Couple”
Topping the long list of drunken St. Patrick’s Day weekend mishaps was the on-camera capture of a college-aged couple engaged in a lewd act behind a dumpster in the back parking lot of Grotto Pizza. The story thoroughly circulated several news and social media sites, and the Newark Police Department sought assistance from the Newark community in identifying both individuals.

Power plant proposal, protests
Conversations heated up last fall as concerns mounted among students, faculty and members of the community over plans for the potential construction of a power plant on STAR campus, the former location of the Chrysler plant. Anticipating a slew of harmful environmental and health effects, many have claimed that such a proposal violates not only the university’s Climate Action Plan—signed by President Patrick Harker in 2009 which entails plans to decrease harmful environmental emissions over time—but also the clean and sustainable reputation the university claims to uphold. Protesters recently made an appearance during a university’s Decision Day, and last week, the majority of the university’s Faculty Senate voted in favor of a resolution which opposes the power plant.

Winter commencement canceled
In early March, the university announced the discontinuation of its traditional winter commencement ceremony, citing too low attendance levels as well as an inefficient concentration of time and resources that would otherwise go toward the larger commencement ceremony in the spring. While students graduating early will still receive diplomas following the successful completion of their required credits, those who wish to participate in a formal ceremony will now have to wait until May. Faculty Senate president Deni Galileo stated that the cancellation decision was unbeknownst to the Faculty Senate. University Vice President and Secretary Jeffrey Garland said he believed the Faculty Senate had been notified prior to the official announcement.

Courtesy of the University of Delaware
The ISE lab on Academy Street is one of the many new additions to campus this year.

The school year of 2013-2014 can be defined by change. Both incoming and returning students encountered many new additions to the university’s campus upon their arrival in the fall. The change continued throughout the year with construction happening on nearly every corner of campus. Continued developments will be happening into the coming years with the demolition of the Rodney Complex on West Campus. For now, we look to the university’s most recent changes to determine which one is the best.

The ISE Lab
Returning to campus this fall, students were greeted by the new, beautiful, modernly-designed building known as Interdisciplinary Science and Engineering Lab. Located on Academy Street on East Campus, the building is home to many advanced laboratories and classrooms. However, science classes aren’t the only type of classes that take place in the ISE Lab. Students fill the popular green rolling chairs to learn about a variety of topics including history, English and math. Known as a hot study spot—especially during finals week when the library is packed—the ISE Lab is also home to Einstein Bros. Bagels, which often has a line which wraps around several times during most parts of the day.

The Perkins student lounge
A popular study and hangout spot for those who live on East Campus, Perkins Student Center gained a beautiful and spacious student lounge area this year. Filled with comfortable green couches and a snack bar where students can purchase myriad food on the go, the newly-constructed student lounge is a great space to stop between classes to get work done or meet up with friends throughout the day. The area is quiet enough to get work done, but at the same time social enough so you don’t feel like you have to keep your voice down to the level that is customary to the second floor of Morris Library.

The Little Bob
Before the Little Bob (Bob Carpenter Sports Center) opened its doors this fall, students had minimal exercise options. Home to three levels and countless amounts of ellipticals, treadmills and free weights, the Little Bob is now one of the most impressive gyms any college campus has seen. It has become so popular that students sometimes even have to wait in line for a machine. It is busiest in the afternoons and on weeknights when students have some downtime to release stress and get their endorphins flowing. Going to work out became much less of a chore the moment the doors of the Little Bob opened this past fall.

Courtesy of The Urban Spoon
Brewed Awakenings is one of the many locations students can grab a refreshing iced coffee on Main Street.

Summer’s fast approaching, and there’s no better way to beat the heat than with a refreshing caffeinated classic––iced coffee. With all the choices Main Street has to offer, selecting the right coffee may seem like a daunting task of trial-and-error. Never fear! We’ve done all the tasting for you and found the best iced coffee on Main.

Central Perk
For its cold brew, Central Perk offers a standard Italian Roast coffee. Taken black, this particular beverage has a strong, full-bodied nutty flavor. The coffee is also fairly acidic––a mild, bitter aftertaste lingers after each sip. Those who like milk and sugar will find this coffee appealing: because the flavor is so strong, it stands up well to dilution. A small iced coffee costs $2.25 for 16 ounces.

Brew Ha Ha
Brew Ha Ha uses its house Espresso Enlightenment blend for iced offering. The coffee is smooth and mild, with light acidity. However, the roast of the beans is the strongest taste–– despite the overall smoothness, a powerful bitter aftertaste lingers. Milk and sugar do little to diffuse the bitterness. In fact, milk only seems to enhance the aftertaste. A small costs $1.75 for 12 ounces.

Brewed Awakenings
Brewed Awakenings’ iced coffee is a blend of Equal Exchange brand French Roast and Los Colinas brews. Black, the coffee is smooth with a very pleasant roasted aftertaste and low acidity. There’s a lingering bitterness, but it’s not overpowering. With milk and sugar, the coffee flavor becomes more subtle but is still pleasantly detectable. A small, which is 14 ounces, costs $1.50.

Starbucks
Starbucks uses a French Roast for its iced coffee. Plain, their beverage is very strong, very acidic and sharply bitter. The brew is marginally better with milk and sugar: milk balances out the acidity and allows the coffee flavor to come through more so than the bitterness. However, the bitterness persists. A small, which is 12 ounces, costs $1.95.

Dunkin Donuts
For a plain iced coffee with no flavoring, Dunkin uses their original house blend, made with Arabica beans. The coffee has a bold roasted flavor, with a light nutty aftertaste. The bitterness is very slight. When taken with milk and sugar, the coffee is smooth and retains its flavor, but the bitterness remains. A small costs $2.19 for 16 ounces. 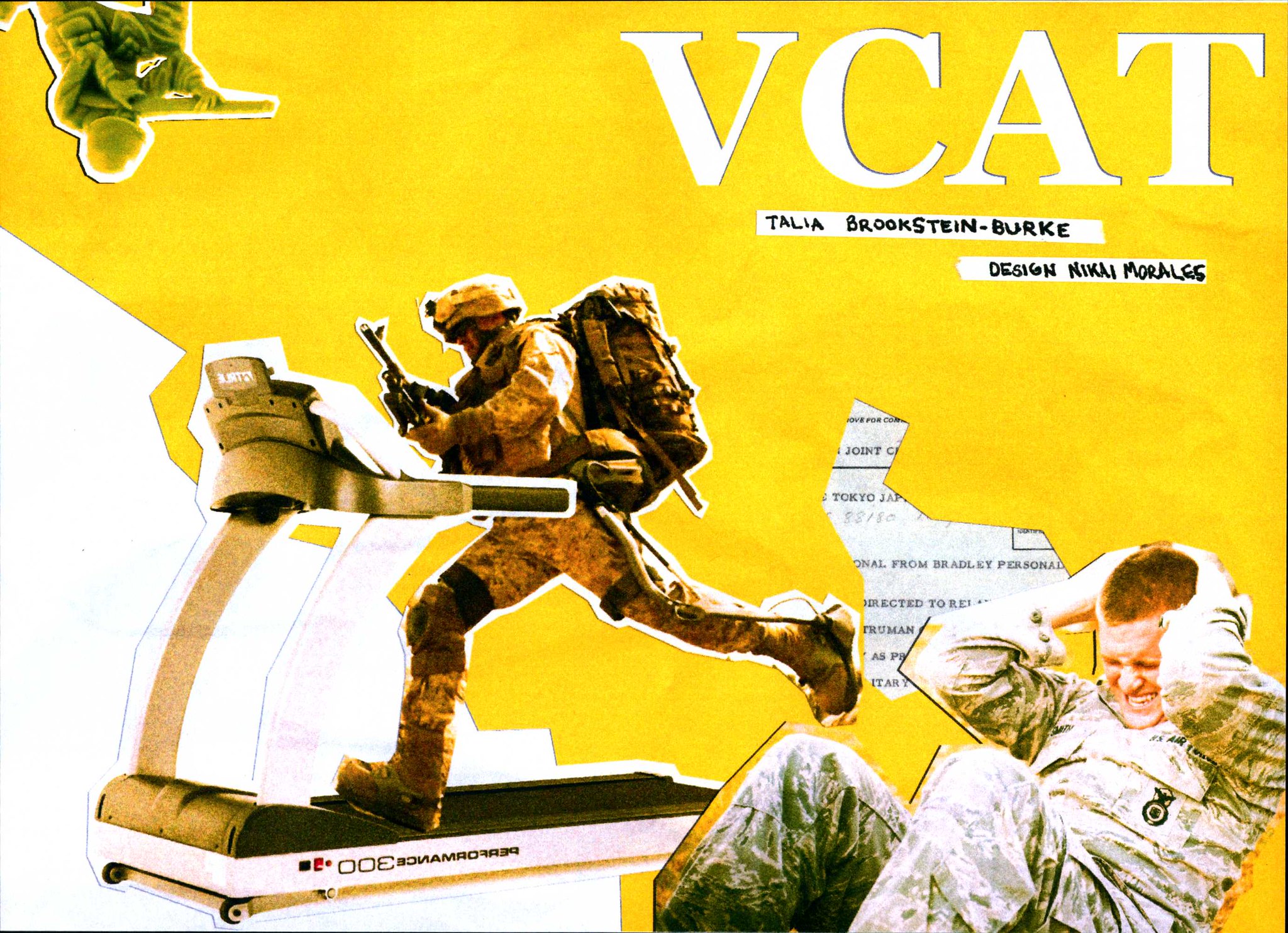 Veterans and College Athletes Together (VCAT) is a newly implemented initiative at the university that aims to create a safe space to aid post-9/11 veterans ...