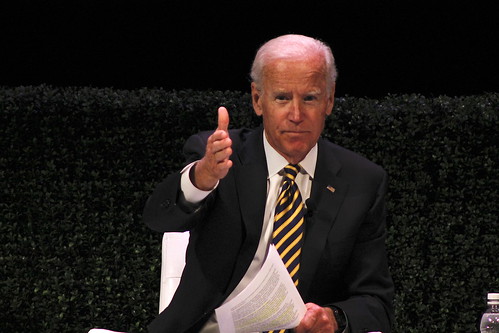 Morgan Brownell/THE REVIEW
On Friday, former Vice President Joe Biden hosted a panel titled “Win-Win: How Taking the Long View Works for Business and the Middle Class,” which discussed the issues associated with short-termism in business.

Campus was once again buzzing with the presence of one of its most admired alumni on Friday afternoon, as former Vice President Joe Biden took the stage in Mitchell Hall alongside a panel of seven business moguls.

Students and faculty gathered for the business panel titled “Win-Win: How Taking the Long View Works for Business and the Middle Class” to hear Biden and other experts discuss the issue of short-termism in business.

Biden explained that the topic of the discussion, “short-termism,” presents an issue because people define it in different ways.

“Short-termism means different things to different people,” Biden said. “To me, short-termism is a characteristic of our economy that incentivizes and pressures executives and puts short term goals, short term investment profits ahead of long term prosperity.”

He added that the biggest concern associated with short-termism is how it impacts workers and the middle class, because having a job is about more than just earning a paycheck, as it is the foundation of a person’s life.

University President Dennis Assanis opened the 90-minute panel with some welcoming remarks to introduce the topic, a discussion of the ramifications of businesses seeking short-term success and not long term benefits.

Biden then took the microphone to comment on his appreciation of the university and the relevance of the Biden Institute’s mission. Then he returned to his seat on the panel and turned the program over to moderator Charles Elson, the director of the Weinberg Center for Corporate Governance at the university.

Elson introduced each panel participant before invoking the first question, asking for the perspective of each panelist on short-termism.

“You’re sort of optimizing not just the shareholders’ returns, but the employees’ returns, the vendor’s returns, the community’s returns and in essence conscious capitalism is creating synergies,” Tindell said. “But it takes a little while to create that win-win situation.”

Sarah Williamson, CEO of Focusing Capital on the Long Term (FCLT) Global, explained that she and others at FCLT see short-termism as a problem for which a solution needs to be found.

Next, they examined how the companies performed in factors like shareholding and job creation in order to better draw correlations.

“What we found was that the long-term companies had a greater return over a significant period of time, but, very importantly, in a financial crisis they got hit harder,” Williamson said.

She added that the reason short-term-minded companies tolerate financial disaster better is that they resort directly to cutting expenses like research and development, while long-term companies continue investing through the financial crisis and eventually make a better overall recovery.

Mark Wiseman, the global head of active equities for BlackRock and chairman of BlackRock Alternative Investors, illustrated the “value chain” through which money is transferred from individuals who save it, to asset owners, to asset managers who then allocate the money to corporations for use so the money can cycle back to to the saver.

Wiseman explained that the flaw with this process currently lies in how corporation management chooses to use that money that is passed down the chain, as corporations may choose to make short-term investments that are not in keeping with the individual saver’s long-term interest in getting a return on their money.

“We have CFO’s admitting that they are essentially willing to destroy shareholder value because of one cent on quarterly reports,” he said.

After Carsten Stendevad, senior fellow and former CEO of Bridgewater Associates and former CEO of ATP, made his opening remarks on the topic, Elson presented the first question: “What should we think about quarterly reports?”

Jeff Zients, the former director of the U.S. National Economic Council and former CEO of the Advisory Board Company, responded by saying that it’s easy to see why CEOs are drawn to short-term projects and solutions to improve performance, but performance ultimately is not depicted accurately by quarterly statistics.

Jeff Sonnenfeld, senior associate dean of the Yale School of Management interjected to point out that companies who do widen their goals to include the long-term often are targeted in the industry in the short-term.

As the program neared its end, Elson posed his final question, which focused on the reason why anyone would invest in temporary ventures with the benefits to increase only short-term.

Williamson cited “overconfidence,” “fear” and “lack of understanding of financial markets” as the major reasons for investors making very short-term decisions and investments.

Biden closed out the program with a nod to the student body: “I hope there are a lot of students in here and that you all found this interesting,” he said.

With that, a mob of students flocked to the front of the auditorium in hopes of getting Biden’s autograph and a photo.