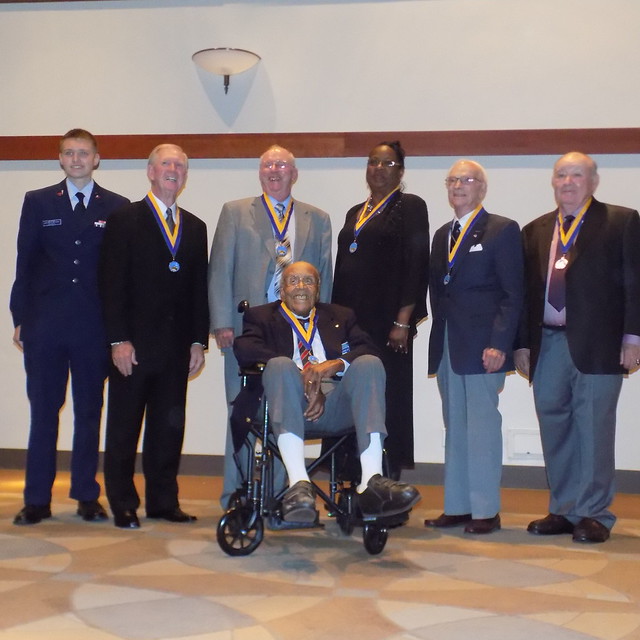 Drew Webb /THE REVIEW
To be inducted into the Hall of Fame, one has to be nominated by another individual. This year’s inductees are recognized for their efforts in building aviation in Delaware as well as providing their services for our country.

This year’s class was the most diverse yet with the induction of two African-Americans. Since the first ceremony, there have only been three black inductees total.

The ceremony began in the front lobby with a wine and cocktail reception while casual conversation was accompanied by the sounds of the Delaware National Guard’s Stardust Knights Jazz Combo. This was also a time to meet the six inductees, and observe their accomplishments through various memorabilia.

The class of 2016 included LeSans Alexander, David Archino, David Ham, Fred Johnson, Thomas Nale and James Vreeland.
Among this year’s inductees, one stood out in particular.

Fred Johnson, 91, is Delaware’s last surviving Tuskegee Airman and the second among those inducted into the DAHF. Walter Evans Sr., founder of the Tuskegee Airmen’s Delaware chapter, was inducted posthumously in 2001. Evans passed away a year prior to his induction.

Johnson was a member of the 477th Bomber Brigade, which did not get to see field action in World War II because of racial discrimination within the military. Due to a lack of resources and subpar training, the black pilots were not as prepared as they should have been. In addition, they faced prejudice and bigotry within the system.
Racism, however, did not stop Johnson.

“We just took the attitude that we were as good as them and could do anything,” Johnson said. “I didn’t feel any different.”

Though the 477th Brigade was not deployed overseas, they did win the battle against discrimination. In 1948, President Harry Truman signed Executive Order 9981, which provided several points of equality and inclusion within the military.
Johnson became a second lieutenant in April 1945 after years of training and relocation. He decided he wanted to defend his country and volunteered for the Army Air Corps while in his third year studying pre-med at Indiana University.

Before that, he graduated from Howard High School where his father, the son of a former slave, was the principal for 35 years. After his service, Johnson went on to be a teacher at Warner Junior High School in Wilmington, where he taught earth and physical science and also coached champion track teams. He was the first African-American to teach at the school.

Another notable inductee was LeSans Alexander, who is not only the first Air Traffic Control veteran inductee, but also the first African-American woman to receive the honor.

Alexander joined the force in 1981 during the Ronald Reagan era, when, she said, the air traffic control was dominated by men.

“The field has changed with the women’s power movement,” Alexander said of the air traffic field. “At least now we have a fair chance.”

Alexander served as an air traffic controller in the force for about 16 years, and still works for the Department of Defense. She has many accomplishments under her belt that include supervising the Air Route Control Center, the Dover Tower Facilities and the Pentagon Tower. She has also trained 65 American and international controllers.

“I don’t know what happened to the normal military accolade where you just shake, salute, drink your wine and sit down,” Alexander said, followed by crowd laughter after she was presented with the first medal of the night by her wingman, Mike Parry.

Alexander’s husband, Anthony Alexander, is also a current air traffic controller at the Dover Air Force Base.
“I taught him everything he knows,” LeSans Alexander said. “I was always better.”

The DAHF also honors the younger generation with the Youth Achievement Award, which this year was given to Dylan Kelsall, a student at Lake Forest High School in Felton, Del.

Last year, the award was given to Moriah Graham, a student at Smyrna at the time, who was the first African-American student in Delaware to receive a private pilot’s license.

While the number of active pilots is declining, students are encouraged to broaden their experiences in the air. Also during the banquet, chapter 240 of the Experimental Aviation Association (EAA) had a table with pamphlets and a sign-up sheet to join the Young Eagles. The chapter celebrated their 50th anniversary this year.

To be inducted into the Hall of Fame, one has to be nominated by another individual. This year’s inductees are recognized for their efforts in building aviation in Delaware as well as providing their services for our country. DAHF Board of Trustees member Duane Brown said part of the satisfaction of flying is to be successful in the field, like the inductees are.