Blood Bank of Delmarva comes to campus for a blood drive 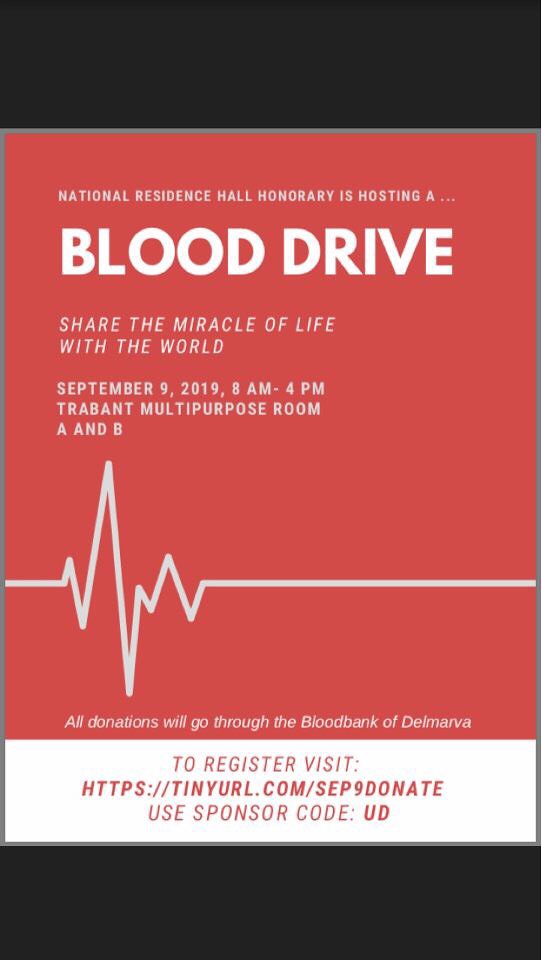 Monday, Sept. 9 in the Trabant multipurpose room, the Blood Bank of Delmarva (BBD) hosted a blood drive from 8:00 a.m. to 3:00 p.m. The blood drive, coordinated by senior human services major and the National Residence Hall Honorary’s (NRHH) Director of Service Emily Labrozzi, drew a steady crowd all day who were helped by almost a dozen student volunteers.

An annual event hosted by NRHH, the drive was initially advertised at the Involvement Fair on Aug. 26. Desso Bryant, BBD’s Account Manager, was the main liaison for BBD and was seen throughout the morning hanging up fliers and greeting donors.

Blood drives at the university date back almost two decades, with the largest event being the BBD Blood Challenge, which the university has won 10 times.

The process of donating began with a quick taking down of contact information, then a health questionnaire. This questionnaire consisted of mostly standard questions about recent travelling, tattoos, piercings, illnesses, etc. Travel to tropical climates can make potential donors susceptible to highly contagious diseases like malaria, while tattoos and piercings will get donors a one-year deferral while their body heals to rule out possible infections.

However, many donors were surprised to see that there were still questions about sexual contact between men. Since Dec. 2015, the U.S. Food and Drug Administration (FDA) has prohibited blood donation by any man who has had sex with another man in the past 12 months. This rule is due to concerns about the spread of AIDS, and though rules have been relaxed in other countries like the UK, some still see it as discriminatory. Many are aware of questions about AIDS, but find the inclusion of sex between men in the health questionnaire to be an outdated generalization.

After this health questionnaire, donors who were still eligible had their blood pressure, pulse, temperature measured and their hemoglobin levels tested with the infamous finger prick. If the donor passed these exams as well, they would finally be referred to the phlebotomists to have their blood drawn.

Then came what volunteer Frankie Zaffino described as “the harpoon,” better known as the needle used to draw blood. Donors once again had a blood pressure cuff put on and were handed a stress ball and told to squeeze repetitively.

Depending on the donor, the actual donation can take 8-10 minutes. When the blood bag is filled, a phlebotomist takes off the blood pressure cuff and removes the needle. Donors were then directed to the snack table, which was stocked with a variety of chips, cookies and granola bars as well as cold bottled drinks.

At this point, the process is essentially done, though donors were asked to sit for 10-15 minutes to ensure that if any adverse effects occurred, they would still be under medical supervision. Donors are also recommended to stay hydrated and avoid strenuous activity for the next 24 hours.

Overall, organizers rated the event as a success with over 70 donors successfully donating and Labrozzi extended her thanks to Bryant and everyone that made the drive possible.

“I am blown away by the turnout and support from this event,” Labrozzi said. “It was rewarding for me to have organized this drive.”

BBD will host its next blood drive at the university on Nov. 12 at Perkins in the Rodney Room, and senior engineering major Alex Stupar will coordinate it.