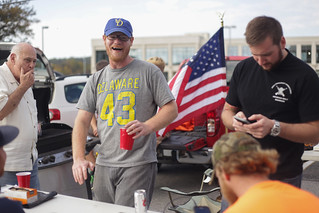 Homecoming is a celebration for everyone. Students revel in all of the excitement around campus. Alumni return to reminisce with old friends.

But for the Blue Hen Veterans, a club for military veterans who are studying at the university, Homecoming is a chance to meet and bond with fellow veterans.

Darrell Wisseman, president of the Blue Hen Veterans, says the club’s Homecoming tailgate is an opportunity for student veterans to hang out and enjoy each other’s company.

“We’re here for some food and drinks,” Wisseman says. “There are a lot of students coming through, and we want to have a good time and recruit other veterans on campus.”

This was the second year the Blue Hen Veterans, formerly known as the Student Veterans Association, hosted a Homecoming tailgate.

Brandon Bristor, a 23-year-old sophomore, says the tailgate serves as a chance to connect with other veterans who have had similar experiences.

“I get to meet other veterans who are a part of the military brotherhood,” Bristor says.

For Todd Glessner, a 29-year-old freshman, the tailgate is a way to boost camaraderie among his fellow veterans.

“It’s a chance to build connections and get to know other people who may have similar stories,” Glessner says.

Wisseman, a philosophy and public policy double major, was a sergeant in the Marines. He says Blue Hen Veterans is more than just a way to meet other veterans.

In the future, members of the club hope to get a spot in front of the stadium for the Homecoming tailgate.

“Our mission is to build the community, to provide support and resources for academic success,” Wisseman says. “The tailgate fits in because we get all the guys together and engage with each other.”

Bristor, a Master-At-Arms Petty Officer Second Class in the Navy, says it is nice to know that there are other people on campus who have been in similar situations.

“I can walk up and meet a veteran that I’ve never met, and instantly feel like I’ve known that guy for years,” Bristor says.

Wisseman says he loves what the tailgate does for his fellow club members. A Veterans of Foreign Wars flag raised at the tailgate also provided a way to encounter other veterans.

“The VFW flag is easily recognized by veterans, so we frequently meet others who have been in the military,” Wisseman says. “It’s an awesome experience to have someone else come up and engage you in conversation because you are a veteran.”

Bob Jefferson, an alumnus from the class of 1970 who served in Vietnam, approached the Blue Hen Veterans on Saturday. He says it is nice to know that there is a group for veterans on campus and emphasized how important it is to have events like a Homecoming tailgate.

“It’s about drinks and food with friends and celebrating what being a Blue Hen is all about,” Jefferson says.

Classics are classics for a reason — their value has withstood the test of time.
Read more
Arts and Entertainment

"The Map of Tiny Perfect Things" is an enjoyable story of appreciating the things you may overlook.
Read more
Arts and Entertainment

Simple ways to improve your diet

Listening to your body’s cues will help you make good choices that will keep you healthy and happy.
Read more