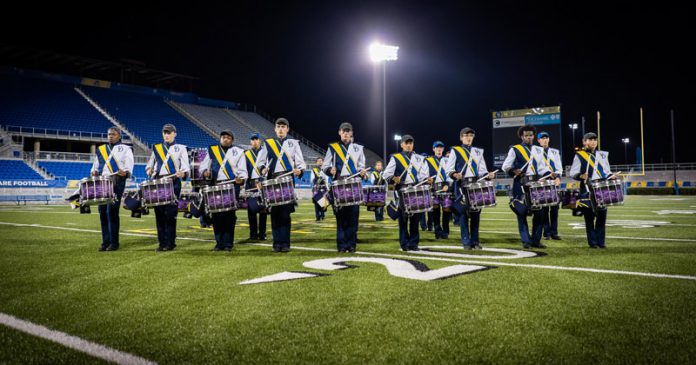 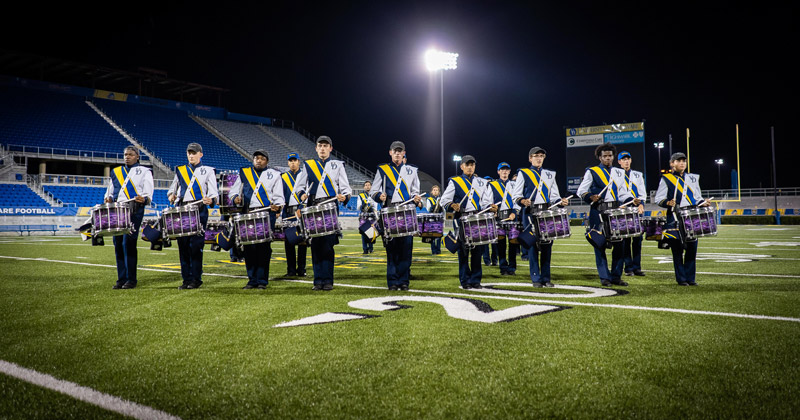 Photo Courtesy of UDaily/THE REVIEW
The University of Delaware Marching Band (UDMB) will be performing at the presidential escort of fellow Blue Hen, Joe Biden.

The University of Delaware Marching Band (UDMB) will be performing at the presidential escort of fellow Blue Hen, Joe Biden, following his swearing in as the 46th President of the United States at Wednesday’s inauguration ceremony.

“It is a tremendous honor for the University of Delaware Marching Band Drumline Battery to be one of only two civilian groups participating in the inaugural events in person on Wednesday,” University President Dennis Assanis said. “We are excited to share our UD pride with the world, and we will all be cheering on our students as they help celebrate this amazing milestone for a fellow Blue Hen.”

The UDMB was notified earlier this month by the Presidential Inauguration Committee (PIC) regarding their performance at the event. The other civilian group in attendance will be the Howard University drum line — honoring their alumna, Vice President-elect Kamala Harris.

The drum lines from the two universities will escort Biden and Harris to the White House after they are sworn in, starting a virtual “Parade Across America” event, as per the PIC. The performance will feature only the drum line section of the marching band instead of the entire ensemble — a precaution taken to limit the number of people at the event.

Of the overall 300 members in the UDMB, 35 performers, including freshmen and recent alumni alike, will travel to Washington, headed by marching band Director Heidi I. Sarver and Assistant Director Jim Ancona.

“Members of the UD marching band have experienced many emotions since we received our invitation to be part of the presidential escort,” Sarver said. “It’s not just an honor; it’s also quite humbling.”

According to Sarver, getting the opportunity to participate in the event in person “is incredibly meaningful for the students.”

“What an honor it is to represent this amazing program and the university on such a national and international scale,” Keith Blake, one of the Delaware drummers who will be performing at the inauguration, said. “Being part of this truly wonderful display of democracy and being able to escort one of our own Blue Hens to the White House is truly a humbling experience. The outpour of love and support for us and this program has been overwhelming.”

The drum line will perform two selections from their repertoire: first, the “Blue Hen Cadence,” a tribute to the university’s mascot and Delaware’s state bird. The second selection, “EMC Hype,” is a piece composed by UDMB’s former graduate assistant Eric M. Carr, who is currently a sergeant and a tenor drum player in the United States Marine Drum and Bugle Corps.

“I am very excited to see my alma mater perform at the inauguration ceremony,” Carr said. “I will not be there in person but will be proudly watching from home. The fact that my composition will be performed makes this even more special.”

Although the UDMB is no stranger to performing for the President-elect — they have performed on several occasions such as the “welcome home” ceremony at the conclusion of Biden’s second term as Vice President and the “Biden is Back” pep rally at the university — the band has been practicing diligently as they did not have a fall season due to COVID-19.

“We spent the weekend rehearsing about eight hours a day,” Ancona said. “We have to get our chemistry back, work out and train our bodies, and we have to get the playing balanced and coordinated. What usually takes several weeks to do in a marching band season, we are trying to do in a few days, and it’s much colder.”

Sarver and Ancona took the band to the 2009 inaugural ceremony and said they know what to expect with the high nerves and tight security.

“We are essentially in the midst of the military bands and honor guards,” Ancona said. “There is definitely a tremendous feeling of pride and a sense of awe.”