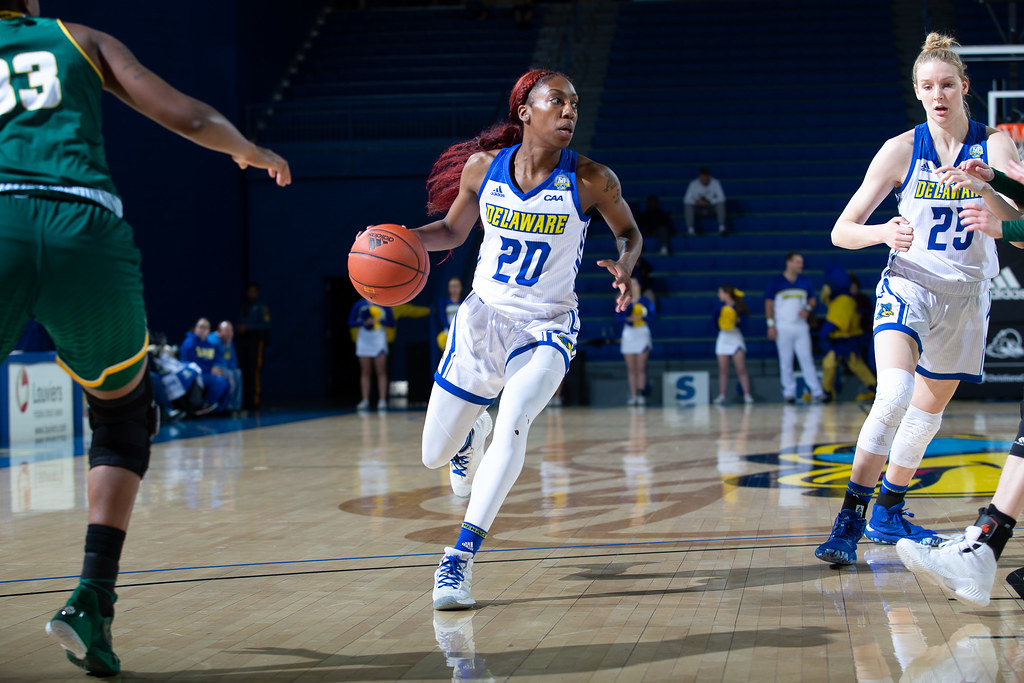 Courtesy of University of Delaware Athletics
Jasmine Dickey was second on the team in scoring last season, averaging 12.4 points per game.

After almost eight months of athletic inactivity at the University of Delaware, a sporting event may finally grace the athletic complexes on South campus.

Our fingers, just like yours, are crossed for it to stay this way.

The Blue Hens start their quest for a CAA title on Wednesday, Nov. 25 against Salem University. The team’s roster has seen significant turnover from last season, losing five players to graduation. Still, Head Coach Natasha Adair is confident in her squad, with what she described in a recent press conference as a “veteran group.”

Here are the five players heading into the 2020 season to watch in helping this new look group contend in the CAA.

Heading into this season, it is clear that the number one threat to any team will be junior Jasmine Dickey.

Dickey is a versatile player that can fit in at the guard and forward spots on both the offensive and defensive side of the floor. Last season, Dickey almost averaged a double double, putting up 12.4 points per game with 9.2 rebounds. Dickey also led the team in steals last season with 51 and averaged just under two steals per contest.

Her stat line increased in almost every category across the board from her freshman year in her sophomore campaign. Throughout her time at Delaware, she has progressed as an athlete, being named to the CAA All-Rookie team as a freshman and both the All-CAA Second Team and All-CAA Defensive team as a sophomore. Dickey was recently named to the Preseason All-CAA First Team entering this year.

Similar to Dickey, McBride is entering her third season with the Blue Hens. During the 2019-20 season, McBride served as a valuable rotational player for the Hens, being named the team’s sixth Woman of the Year.

Compared to her freshman year, McBride did see a decrease in minutes as sophomore, playing in 17 minutes per game. The decrease in minutes could also point to a drop in her scoring and assist averages, which fell to 4 points and 1.8 assists last season.

McBride should see an increase in minutes in 2020 due to the graduation of Abby Gonzales. Gonzales played the role of point guard and was one of the team leaders last season. McBride’s ability to facilitate the floor puts her as the clear fit replacement for Gonzales. Mcbride is the active team leader in assists, dishing out 141 dimes in her first two seasons.

According to Head Coach Natasha Adair, Paris has been doing well with taking on that role.

“As a junior now, Paris, she’s not looking over at me anymore,” Adair said. “There’s just that sense of confidence in just her own individual game; you can see where she’s worked on her game.”

Battle is one of two players to sit out last season due to NCAA transfer requirements. The Indiana State transfer should provide a reliable scorer for the Blue Hens to go alongside Jasmine Dickey.

In her time at Indiana State, Battle averaged 4.9 points as a freshman and 7.6 points per game as a sophomore. She was able to increase her field goal percentage between the two seasons as well, with a percentage of 44.2% in her 2018-19 season.

When speaking about Battle, Adair described her as a “scorer” and “electric.”

Expect Battle to provide support on the offensive and defensive glass, as well as providing a defensive presence to opposing shooters. In her last year at Indiana State, Battle averaged 6.9 rebounds per game and racked up a total of 27 blocked shots.

An interesting fact about Battle is that she is actually the daughter of Kenny Battle, who played for multiple NBA teams in his four-year career.

Oleary enters the year as one of the only two seniors on the team. With the aforementioned names of Enabosi and Lawrence graduated, there are now multiple spots both on the starting lineup and in the rotation for Oleary to take on an expanded role this upcoming season.

The 6’2” forward is focused on filling the role left by Enabosi in particular, with a main focus in trying to contribute on the offensive end of the floor.

“I’ve been pushing myself really hard to be an option on offense and just making sure I’m in the right place, doing the right thing,” Oleary said.

When asked about Oleary, Adair said she trusts the senior forward when she is on the court. Adair also described what she is expecting to see out of Oleary.

“From a production standpoint collectively as a unit, she’s definitely one of our glue pieces that everyone is going to see have more of just a vital role in what we do,” Adair said.

While Johnson is the second senior on the team, unlike Oleary, Johnson enters only her second year with the team. Johnson played her first two years of college basketball at the University of Florida and Tallahassee Community College before arriving at Newark.

With scorers in Bailey Kargo and Samone Defreeze graduated as well as Kayla Shaw transferring to Azusa Pacific University, look for Johnson to fill the role left by the three in providing offense at the guard spots alongside McBride.

Coach Adair credits Johnson for the work that she has put in, especially in regard to improving her offensive production.

“What she’s worked on is her scoring, her shot, her percentages, and that’s where I have really seen her grow,” Adair said.

Johnson’s quickness could provide troubling matchups for defenses, as having her on the court allows the team to stretch the floor and play fast on offense, scoring points in the fast break.

In her first year with the Blue Hens last season, Johnson averaged 4.9 points per game, while handing out just under two assists. Adair believes having a year of being in the team’s system will benefit Johnson heading into her second year on the team.