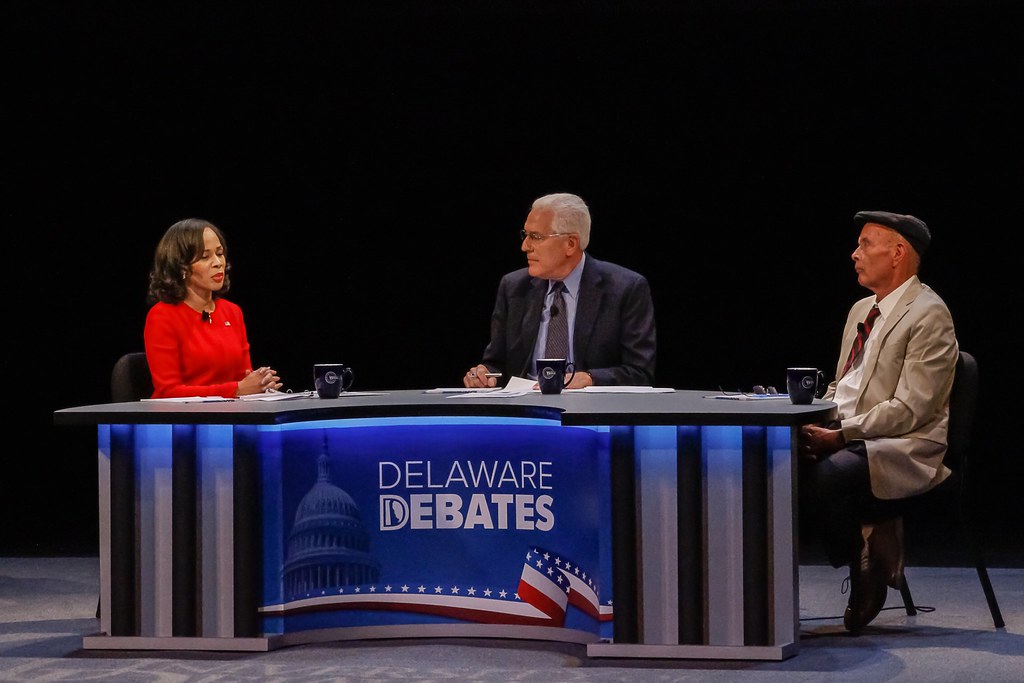 In the 2016 elections, Walker ran against Blunt Rochester as a Democrat, having since changed his views on topics such as gun rights and abortion following some “meditation on the facts.” Although running as a Republican, Walker has been publicly disavowed by the Delaware Republican Party.

“I don’t need their help,” Walker said. “I run my own campaign.”

Blunt Rochester noted the recent galvanization of woman voters and candidates, and cited ongoing efforts in Congress to include more workplace training and combat workplace non-disclosure agreements. Walker, similarly, said that, although the problem of sexual harassment was “much worse when I was growing up,” women remain underpaid, and that he supports the #MeToo movement. 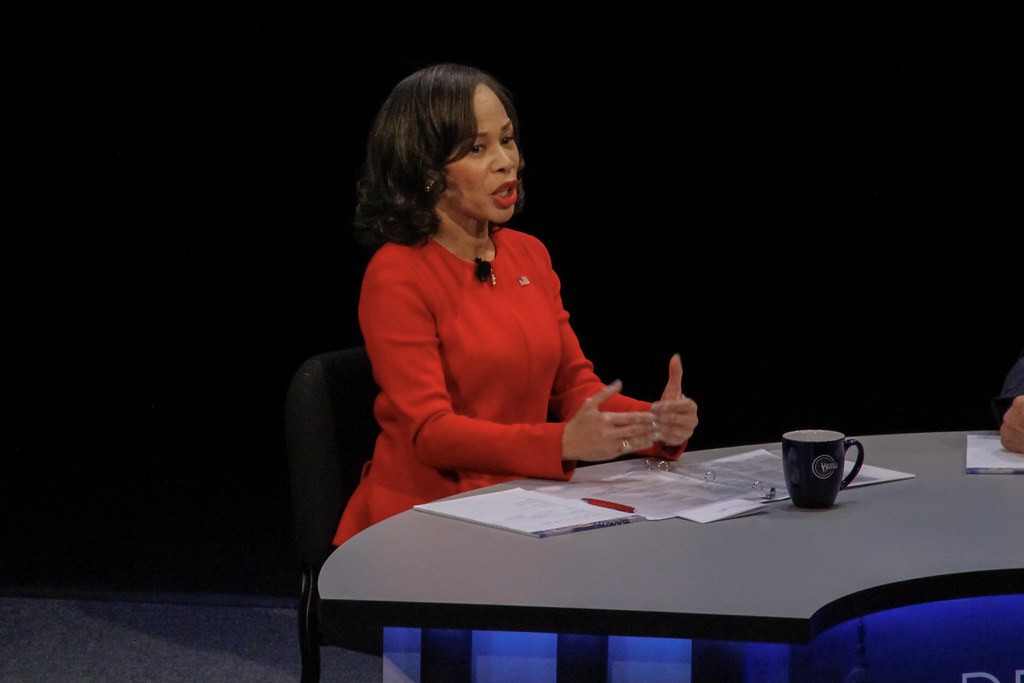 Concerning climate change, the two advanced disparate positions. Walker, who sees climate change as a byproduct of “political speech,” said that there is no statistical evidence in support of climate change.

“We don’t know what climate change is,” Walker said.

Blunt Rochester, by contrast, condemned those who “don’t believe in science,” and believes that the U.S. sent the world the wrong message by pulling out of the Paris Climate Accord. She cited the myriad economic benefits to accepting climate change — such as new markets for green technology that could serve as economic boons — and noted concerns about an unpredictable, warming climate expressed by farmers and other Delawareans.

Delaware, a low-lying state close to sea level, is at particular risk for flooding due to rising sea levels.

Mitchell Patterson and Brandon Holveck provide a brief analysis of the debate between Lisa Blunt Rochester and Scott Walker.

The candidates also vouched for opposing views on federally funded, universal health care, which has been a major topic nationwide throughout the 2018 midterm season.

To Walker, healthcare for all comes at a cost, and, in his opinion, incentivizes laziness and unhealthy lifestyle. Walker noted that America is the unhealthiest nation on earth, or “darn close to it,” and claimed that if citizens eat and live right, they won’t have any need to go to the doctor. 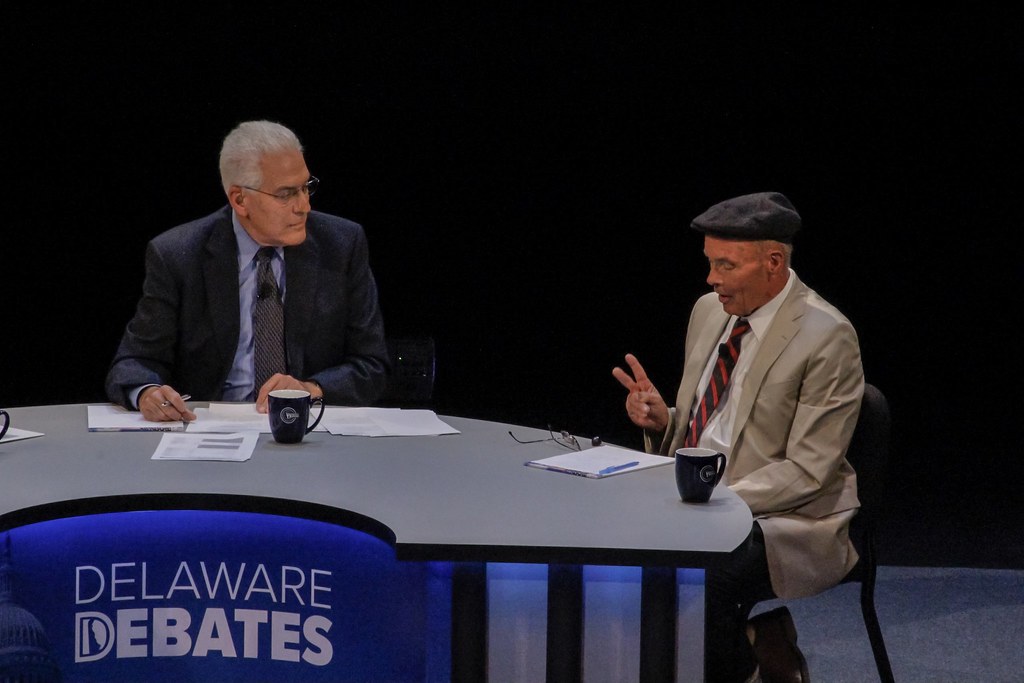 Blunt Rochester, by contrast, expressed her support for the Affordable Care Act (ACA), claiming that the law, while with its imperfections, advances her basic view that healthcare “should be a human’ right.

She warned of the dangers of repealing or weakening the ACA, which would threaten the healthcare of nearly 23 million people who have been given healthcare access that they did not have before.

With respect to gun control, an especially controversial topic in the wake of the Parkland shooting last spring, Blunt Rochester said that “Congress has a real role to play,” endorsing a ban on assault weapons, as well as investment in research, particularly in the arena of mental health. She also questioned the altered position of Walker on gun rights.

“Where were you at when you ran as a Democrat?” Rochester asked.

Walker reiterated his support for the Second Amendment, also claiming that citizens in the “poorest neighborhoods of Wilmington” that he has spoken with want guns.

Analysis: Delaware Debates as Delaware as it gets

The debate turned to other matters of relevance to college students, such as protections of “Dreamers,” students previously protected under DACA but whose status has been precarious under the Trump administration. Rochester cited nearly 50 Dreamers at Delaware State who have been threatened under the Trump administration, noting that DACA protections are a bipartisan effort that has been thwarted under Speaker of the House Paul Ryan.

Walker, while saying that the status of Dreamers is a concern, stressed that immigration and border security more generally ultimately ought to be addressed before focusing on dreamers, supporting a “virtual wall” at the border.

The debate closed with comments on recently revealed information about Walker, such as code violations and unsettled legal troubles. Walker said that his constituents care about these matters.

Blunt Rochester, while skirting around direct comments on Walker’s troubles, encouraged voters to approach their votes with a level head, stressing that she’s running for the people not against someone else.

Scott Walker on the current state of Washington: “I really don’t know what’s going on.”