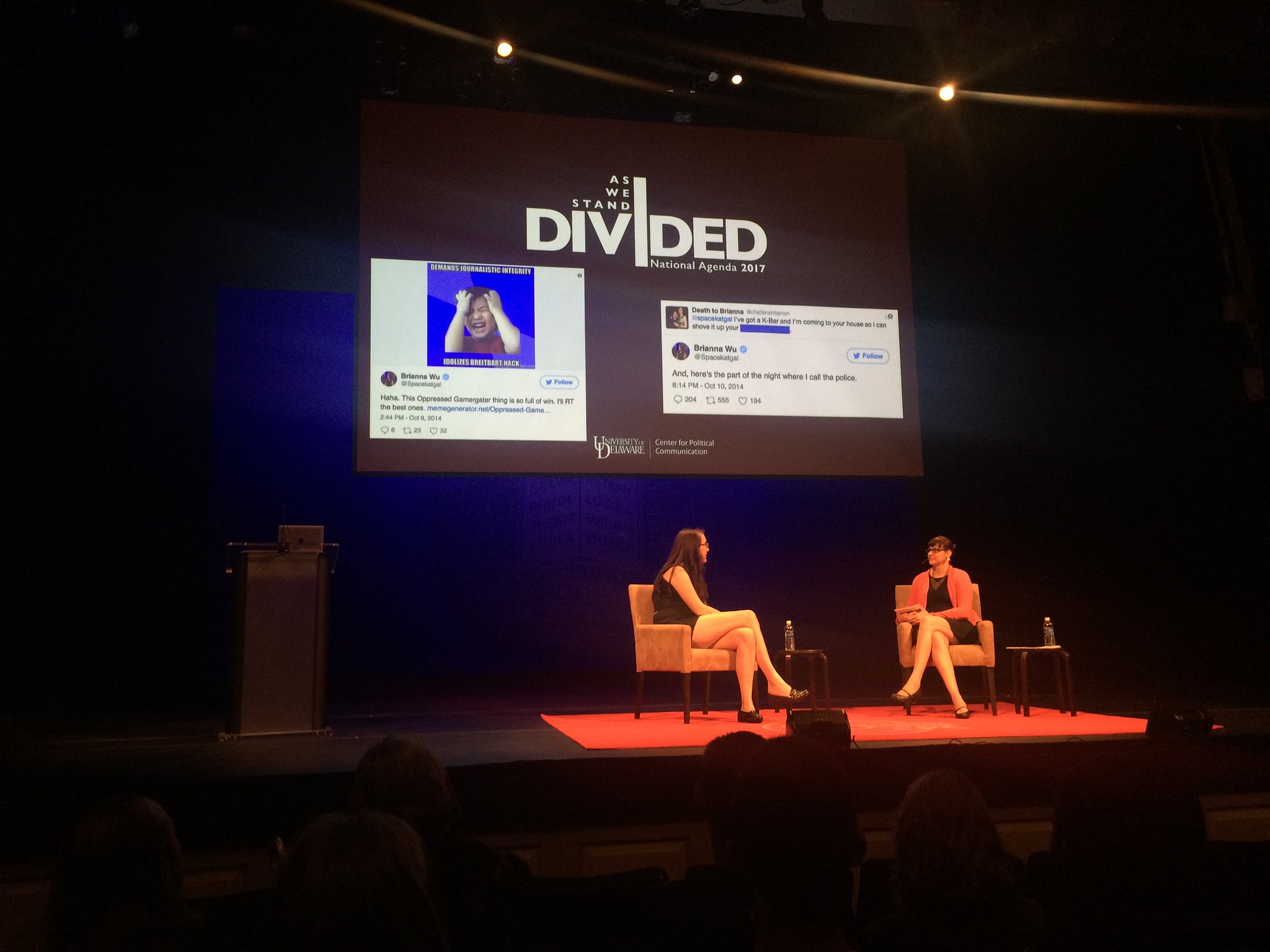 This past Wednesday marked the 7th annual National Agenda Speaker series hosted by the Center for Political Communication (CPC). The event has featured a variety of professionals, from NPR journalists, to prominent politicians, authors, campaign strategists and comedians. This year’s theme, “As We Stand, Divided,” seeks to explore the racial, gender-based, ideological and cultural divides that exist in American society.

The night began with Professor Lindsay Hoffman, associate director of the department of political communication, reminding the audience that the night would require a “civil and respectful dialogue.” The intention of the series is to bring meaning and understanding to our political climate, rather than create a platform for heated arguments.

Brianna Wu, the first speaker of this year’s series, is no stranger to fierce debate. She found herself in the middle of a firestorm known as Gamergate back in 2014 when she spoke out against the online harassment of women video gamers. The advocates of the hate movement then targeted her.

Wu’s story came to life when she shared a string of tweets that published her address online, harassed her husband and threatened to sexually assault and murder her in graphic detail. She then had to flee her home in search of safety, and spent many of the next few months of her life searching for those who were to blame, with little support from the federal government.

Frustrated, Wu decided to run for congress in the 8th district of Massachusetts against Democrat Stephen Lynch. Wu’s campaign tagline calls for a “bolder Democratic party” in need of better representation and better legislation.

“When I learned that one of the women at the center of the controversy was using her experience to run for Congress, it seemed like she would have an interesting story to tell,” Hoffman said.

Wu maintained her quirky sense of humor while speaking candidly about her transition from engineer to politician. She has sacrificed her neon locks and leather in favor of simple, professional dress and plain brown hair. Even so, if she is elected to Congress, she will certainly stand apart from the crowd.

“I didn’t really know what to expect and I was quite surprised that Brianna knows so much,” said David Drew, a Newark resident and frequent attendee of the National Agenda series.“I’m probably going to try to support her in her primary, even though I can’t vote in Massachusetts. I think we need more people like her in Congress. I hope she succeeds.”

Not everyone was so supportive of Wu’s advocacy for left-leaning policies.

Phoebe Lucas, who runs the National Agenda Twitter account during events, stated, “There were a couple negative comments saying things like ‘this is supposed to be a non-partisan event’ and ‘we have someone who’s definitely on the far left being represented.’”

The National Agenda is a non-partisan event, though the speakers who come to share their stories often have strong political leanings.

“Regardless of her political party or policy proposals, she demonstrated to students that even when there is so much standing in the way to prevent you from becoming involved in your community, you can still do it” said Hoffman.

Though Wu was vulnerable as a minority in her field and a victim of cyber-bullying, she has chosen to continue to put herself in a vulnerable position running for Congress while using the very platform that began her torment to promote her campaign. Wu said that this was the right thing to do, considering the current state of the U.S government.

The National Agenda series will feature five more events that are free for students and the community. The next speaker will be author David Joy on Wednesday, September 20 in Mitchell Hall at 7:30 p.m.

Joy, a southern author, recently published an essay called Digging in the Trash that explores the misconceptions of poverty and southern society. His books, including Edgar-nominated “Where All Light Tends to Go,” will be available for purchase in the lobby of Mitchell Hall during the event.