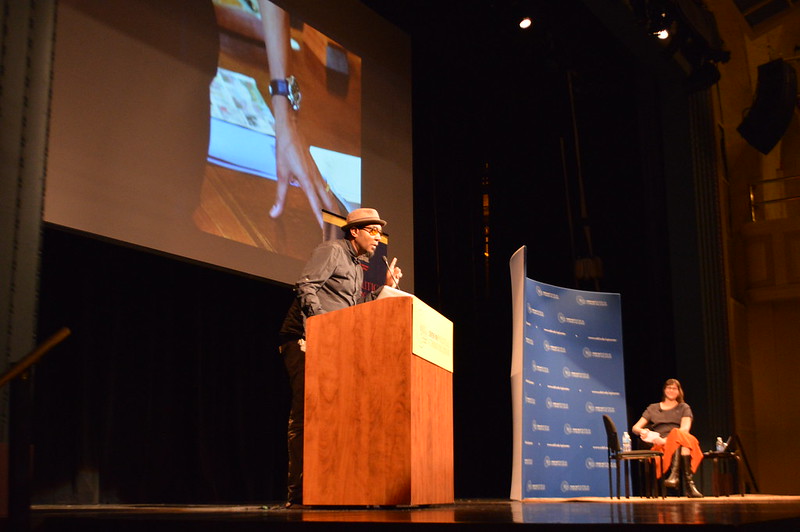 When discussing race, many typically would not go to cartoons for insight. For cartoonist Keith Knight however, that is the medium he uses to lead discussion on topics like police brutality.

Knight is one of the funniest and most highly regarded cartoonists in America and the creator of three popular comic strips, “The K Chronicles,” “(th)ink” and “The Knight Life,” Lindsay Hoffman, director of the National Agenda speaker series, said.

CNN even tapped Knight to grade the United States on its progress concerning racial issues, she said. Despite this and his many accolades, many newspapers still won’t run his work.

“I’m going to show you why,” Knight said.

Knight came up with his first comic “The K Chronicles” as an answer to feeling unrepresented in the media as a young black male who was into hip-hop and wasn’t a “hoodlum.” There are hip-hop fans out there that are smart, enjoy other music and are into geeky-nerdy stuff, Knight said.

“I do autobiographical cartoons, and what I like to do is poke at the hornet’s nest of race in America with my comics,” Knight said. “I like to try and slide them in very cleverly. It’s akin to you meeting me in a bar and telling you these stories and you’re not quite sure whether to believe me or not.”

Knight then created “(th)ink,” which moved away from autobiographical comics to ones commenting on content from the news. He said he is proud of his work because his cartoons cause people to have difficult conversation about race.

“I have literally had editors say to me, ‘We have a white liberal readership and we don’t want to offend them,’” Knight said.

Knight’s presentation of his work in “They Shoot Black People, Don’t They?” aims to continue the conversation, even to the point of discomfort. Created from more than 20 years of Knight’s cartoons, it looks at police brutality in the United States. It is designed to provoke constructive civil dialogue among all people, Hoffman said.

No one who has been killed by the cops deserved to die, whether they were selling cigarettes or playing with a toy gun, Knight said. Over these 20 years of doing police brutality cartoons, Knight said he always wonders if each one will be his last.

“We have certain police officers who see me as a target, as someone to take a shot at, and I have a real problem with that,” Knight said. “I am a father, I am a son. I should be treated similar to everybody here.”

The Justice Policy Institute estimates more than 5,000 people in the U.S. have been killed over the past decade by police, Knight said. In 2013, just over 1,000 people were killed by police and no cop has been convicted of any wrongdoing, he said.

“Nobody is that good at their job,” he said.

Knight said he thinks multiple things contribute to this, including the United States’ gun culture, the militarization of the police department and the war on drugs. In 2007, 12.2 percent of black citizens and 10.5 percent of whites in Washington state admitted to smoking marijuana, yet black marijuana possession arrest rates were 91 percent, while white rates were 8 percent. This high disparity in arrests is what institutional racism looks like, Knight said.

“So when you see Black Lives Matter, it doesn’t mean ‘oh we don’t care about anybody else’, it means s*** is happening to black people in ways that ain’t happening to you guys,” Knight said.

“They Shoot Black People, Don’t They?” earned Keith the title of NAACP History Maker earlier this year. His goal is to present the slideshow in all 50 states in the next two years, Hoffman said.