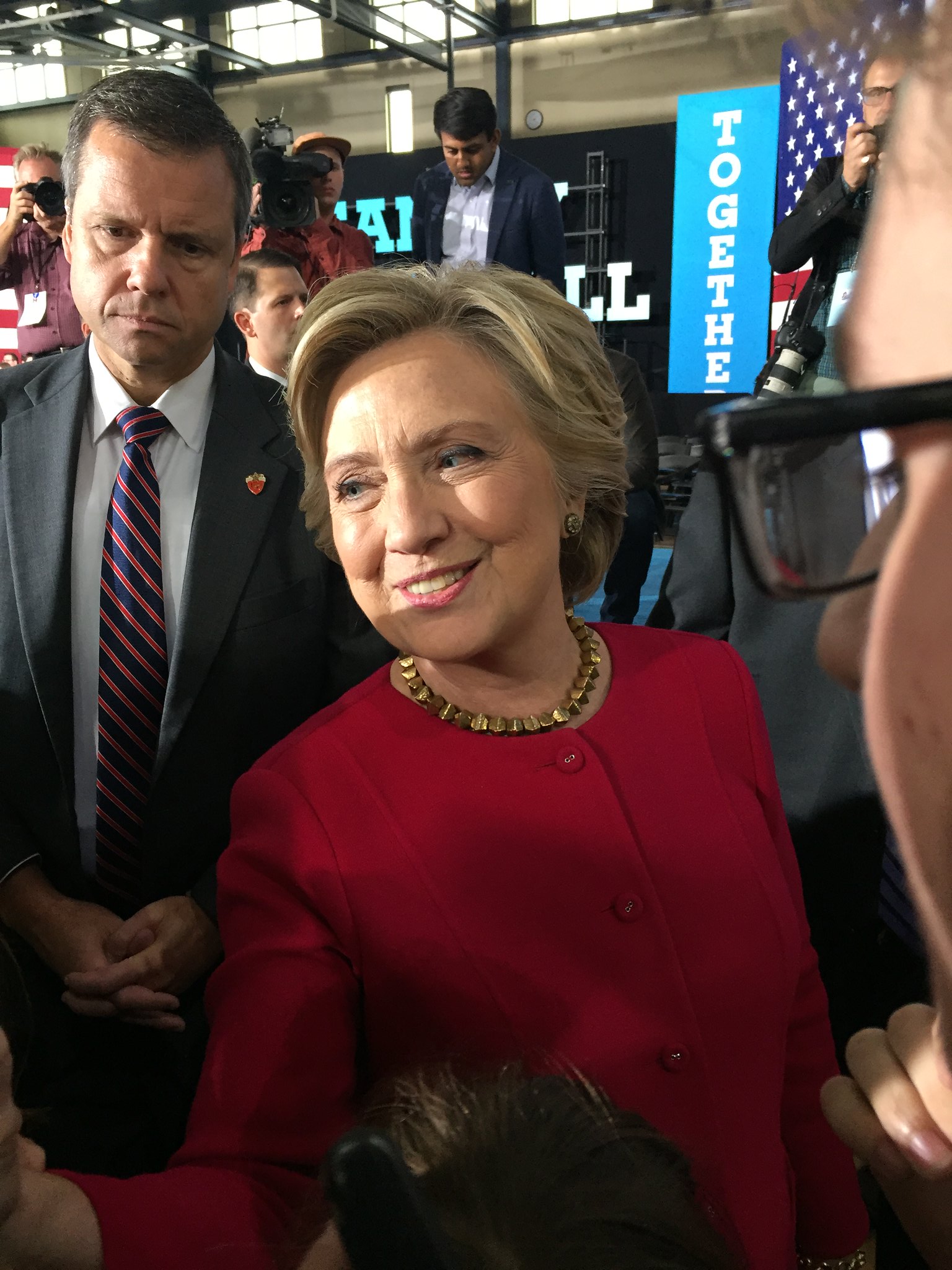 The first question during Hillary Clinton’s Delaware County “Family Town Hall” has already become famous over social media and other newspapers. The girl who Hillary first addressed as “you with the red bow” is Brennan Leach, 15 — a sophomore at The Shipley School and the daughter of Daylin Leach, the Pennsylvania state senator.

Brennan’s question was about body image, and how Hillary planned to help girls understand that they are so much more than just what they look like, especially with the popularity of public figures like Donald Trump who degrade women based on physical appearances (most recently, the former Miss Universe contestant).

“I’ve been watching all of Donald Trump’s rallies and debates and press conferences, and to hear what he says, it really does get back to me and my friends… it really is damaging,” Leach said. “I thought, ‘This is my one chance to speak out and tell Hillary myself how important it is, what she does and her message.’ I’m not old enough to vote, sadly, but I do go in and press the buttons with my dad.”

Brennan’s father, Daylin, said he had no words to describe his pride for his daughter and her eloquent question other than “verklempt” — a Yiddish word that roughly translates to “swelling with pride.”

“One of the things I’m proudest of is because of my job, the kids have been exposed to politics in a very intimate way,” Daylin said. “They really have assimilated everything that they’ve been learning over the years, and I think whatever profession she goes in, it’ll serve her well.”

Much like Brennan and her father, Hillary and Chelsea Clinton created a picture-perfect family image at the Haverford Community Recreation and Environmental Center on Tuesday.

“I am so happy to be here with all of you, and especially with my daughter, otherwise known as the mother of my grandchildren,” Hillary said. “Chelsea and I talk about this a lot because obviously I am incredibly proud and grateful for my grandson and my granddaughter, and I think about the future even more than usual.”

Hillary continued with her message that every single child in America deserves the chance to live up to his or her “God-given potential.” For her whole career, including her time as first lady, senator and secretary of state, she has worked to help children and families with everything from healthcare to education reform.

“So what I’ve been trying to do in this campaign is really a continuation of what I’ve tried to do throughout my entire life,” Hillary said. “And that is to do everything possible to put kids and families front and center, to make sure that we provide the opportunities that families deserve to have to have good jobs with rising incomes, the ability to pay for the necessities of life, affordable child care, affordable college – the kinds of things that people talk to me about across America.”

She and Chelsea took questions from the audience to address concerns from the citizens of Delaware County. In the spirit of the event, Chelsea acknowledged how her mother helped her throughout her life.

“I wish that people really understood that ‘Stronger Together,’ that kind of putting families and children first, isn’t rhetorical for my mom,” Chelsea said. “It’s what I have watched her do my whole life, and it’s something I’m so grateful to have been arguably the prime recipient of.”

Hillary’s responses were framed by real-life examples of the causes she represents — a single mother working multiple minimum-wage jobs to support her children, families struggling with mental illness and drug addictions, the law enforcement-related uncertainty in the black community and the exorbitant expenses of health care — throughout all of the audience’s questions.

During the short discussion, Hillary managed to cover a broad range of topics. However, some audience members still had their own. For Tara Horwitz, 39, she came hoping to give Hillary a letter about the need for care of people with autism. Horwitz was holding up a hand drawn sign featuring the logo for autism awareness and Hillary’s campaign logo.

“I have a son who is 20 years old, and he has autism, and it’s his last year of entitlement, which means it’s his last year of high school,” Horwitz said. “I really would like to know more about Hillary Clinton and her views on anything: healthcare, education. I just really like that she is pro-public service.”

John Ryan, 47, also came to see the Democratic candidate in person. He is endorsing Hillary in this election.

“She’s the one for the job, she’s the most experienced for the job, and the other choice is not even close,” Ryan said.

Ruth Black, 69, knew the event would feature a question and answer session. She wanted to ask if Hillary was for or against the privatization of social security because she has been paying into it for over 50 years.

“I love to come and listen to Hillary speak every chance I get,” Black said. “I just wanted to hear more about some of her issues. I’m in love with her and Bill and her daughter. She’ll be the best candidate ever. We’ve got to stop all the hate and start loving again, and that’s what she’s going to help us do.”