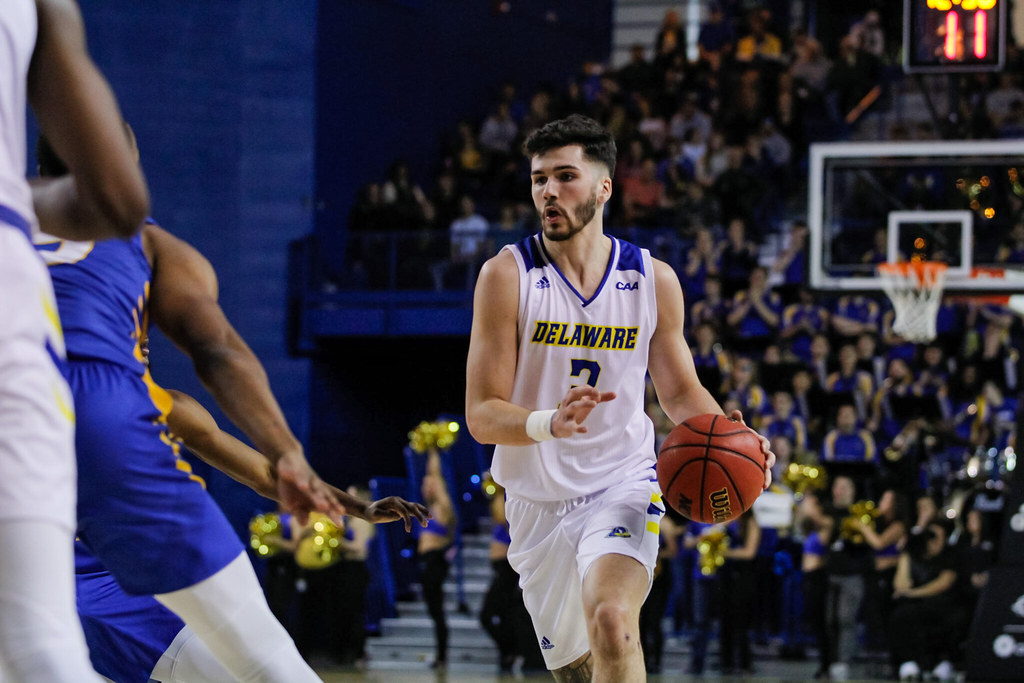 Louis Mason/THE
REVIEW
Nate Darling declared for the NBA draft in April after averaging 21 points on the season.

Blue Hen men’s basketball star Nate Darling declared for the NBA draft last month. Both he and Head Coach Martin Ingelsby shared their excitement for the decision on social media in early April.

This year’s NBA draft process is different from previous years due to coronavirus. On Thursday, the NBA postponed the NBA draft Lottery and NBA draft Combine. Usually, players can set up workouts with NBA teams to receive feedback. However, those workouts, as well as in-person interviews between players and teams, have been cancelled.

Darling had entered his name to the NCAA Advisory Committee in order to get feedback from NBA teams, which Ingelsby was all-for. Darling and Ingelsby received the feedback but decided to keep it confidential. In addition, Darling will be able to do interviews with teams that request them from him.

“I think it’s a win-win situation for him,” Ingelsby said. “It’s a valuable experience where he can get feedback from NBA teams on what they think and areas that he needs to work on moving forward, and I really encouraged it.”

Darling has decided to keep his college eligibility for his redshirt junior season. The date for players to withdraw their names from the NBA Draft and retain college eligibility was originally June 3rd, but the NCAA has pushed this deadline back to an unknown date due to the delay of the NBA Draft Combine. A new date will not be decided until the league sets a timeline for the 2020 pre-draft process.

Ingelsby said Darling has had some conversations with agents. In order to retain his eligibility by hiring an agent, that agent would need to be NCAA-certified. Ingelsby also said that they have had some NBA representatives on behalf of different teams to get some information on Darling.

“I highly encourage guys at his position to be able to do that to get those experiences,” Ingelsby said of Darling entering his name in the NBA draft process.

If Darling returns to Delaware, he will be the only returning All-Colonial Athletic Association (CAA) First Team member from 2019-20. Defenses will plan out their game plan around him, even more so than they did this past season.

Ingelsby said he thought Darling can handle the pressure of expectations.

“He’s a gym rat, always in the gym wanting to work out, grabbing an assistant to work out before or after practice. So I think he’ll embrace those opportunities. I think he’ll be able to handle those expectations.”

Delaware has been picked in a few preseason brackets, including ESPN and CBS Sports, to be the CAA champion and represent the league in the 2021 NCAA Tournament. If Darling returns, he will be a big reason why.

This is a developing story. Check back at www.udreview.com for further updates.