Evan Tridone/THE REVIEW
Cooking doesn’t have to be difficult, so why not learn with the help of our very own senior reporter, Evan Tridone.

Over winter break, I was lucky enough to do a fair share of cooking. My favorite dish I made was pollo a la plancha, chicken and rice. This dish consists of a chicken breast, black beans and white rice traditionally at the bare minimum.

The version here is a version originally by YouTube channel Binging with Babish and adapted for this newspaper. The first thing that must be done for this recipe is to marinate the chicken. The marinade is a mix of cumin, cayenne, salt, pepper, garlic, olive oil and lime. The most important part of this marinade is the lime, since it will ensure that the chicken remains juicy after being grilled later on.

For this recipe, the chicken breast should be butterflied and pounded. This is done by cutting down the middle of the breast laterally but leaving it attached. This allows both ends to be spread. I suggest looking up a tutorial on YouTube, since this is something better explained with a visual.

Be sure to take your chicken out of the freezer, and place it into the fridge the night before you plan to make this meal in order to defrost the chicken. If you aren’t able to do this, let it sit in lukewarm water for 10 minutes or so.

The next part of this dish is the sides. On a stovetop, start white rice in one saucepan and chopped bacon in another. The bacon may take some time to render, but be patient with it. After about 10 minutes on medium high heat, the bacon will be ready to be taken off heat.

Reserve the bacon fat in the saucepan, and sauté your green peppers and onions for about a minute. After the onions turn translucent, add the whole can of black beans (water included) and bacon back into the pot with some salt and garlic. Let this simmer for about 30 minutes over medium heat.

When the beans are about 10 minutes from being done, oil a skillet and stir fry some onion slices. After the onion is finished, put the whole chicken breasts onto the skillet. Let them cook for about 5 minutes on each side, and remove them from the skillet once they reach 165 degrees Fahrenheit internally.

This dish is a Cuban classic, sure to make any kitchen smell amazing for a few nights and fill up whoever it is being served for. It is a little on the expensive side, however. This cost can be cut down by removing the rice or beans. Also, check out Binging with Babish’s video on this recipe for any needed visuals on any steps provided here. Happy cooking!

Steps
Marinade: Combine garlic, cumin, juice of 2 limes, salt, pepper, and olive oil.
Place chicken and marinade in a large resealable plastic bag, and place in the fridge for at least 2 hours.
Add 3.5 cups of water and 2 cups of rice to a large saucepan. Bring to a simmer and cover, then reduce the heat to medium low.
Place bacon and 1/3 cup of water into a saucepan. Cook until bacon is crispy, about 10 minutes.
Remove bacon from the saucepan, and sauté peppers and chopped onions for about 2 minutes.
Add bacon and beans into the saucepan with onions and peppers, let simmer for 30 minutes.
Sear sliced onions on a griddle or skillet, with vegetable oil.
Remove onions, add chicken breasts to the oiled cooking surface.
Cook for 5 minutes on each side, or until the internal temperature reaches 165 degrees Fahrenheit.
Garnish with lime slices, chopped cilantro and serve. 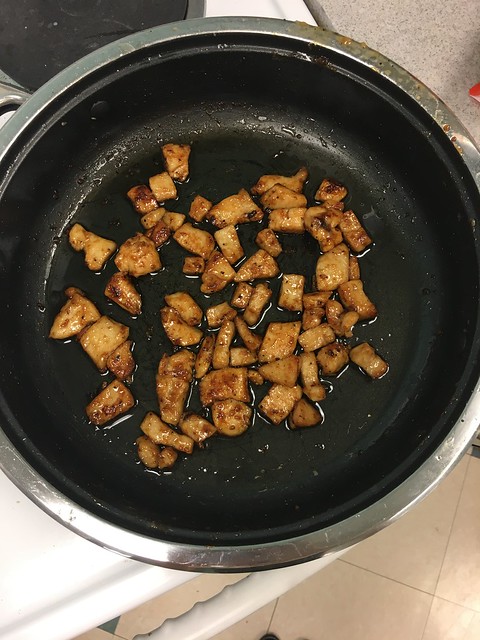 BY EVAN TRIDONE Senior Reporter //embedr.flickr.com/assets/client-code.js Evan Tridone/THE REVIEW This delicious honey butter chicken recipe will satisfy your hunger without too much time and effort. ...