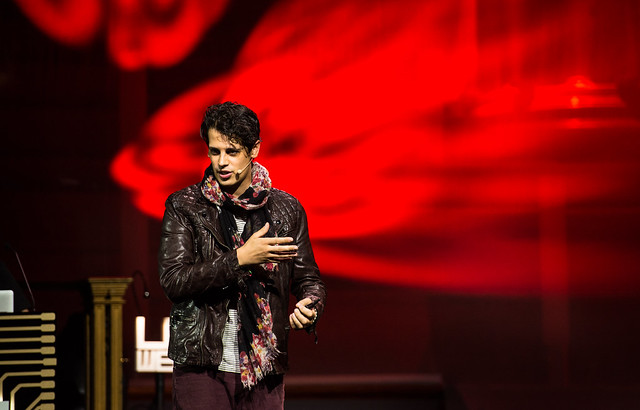 Courtesy of @Kmeron
Milo Yiannopoulos, a commentator aligned with the alt-right conservative movement, is slated to come to campus on October 24.

Yiannopoulos has been quoted saying things such as “Rape culture is a myth,” “There is no bias against women in the tech industry, they just suck at interviews.” He was banned from Twitter in July following his involvement in racist attacks against “Ghostbusters” actress Leslie Jones.

Andrew Lipman, chairman of the Delaware Federation of College Republicans, is the principal organizer of the event and confirmed via email that he was the one who reached out and invited Yiannopoulos to campus.

“Multiple members of our membership requested that we bring him to campus so when I saw the opportunity I took it,” Lipman said.

There is widespread concern on campus that Yiannopoulos’ rhetoric, which is often accused of being sexist, racist and otherwise hateful, will inflame tensions with minority groups on campus. The Katie Pavlich speaking event last September, hosted by the Students for the Second Amendment, kicked off a dialogue on race relations. Many fear that Yiannopoulos will be even more controversial and offensive and erase the progress made on campus.

Anonymous alumni created a petition on Change.org requesting that the university prevent Yiannopoulos from speaking on campus.

“If one disagrees with Milo and the people whom [sic] support him, silencing him will do nothing to change their opinions, only strengthen them,” Lipman said when asked about the concerns of alumni surrounding the event.

Although Lipman said neither he nor the club endorsed Yiannopoulos’ rhetoric or positions, he maintained that Yiannopoulos’ right to freedom of speech trumped any concern about hateful rhetoric on campus.

“If you disagree with the content of what he says the best thing to do is to let him speak and challenge his opinions to prove them wrong,” he said.

Connor McGinley, president of the university’s chapter of Young Americans for Liberty, said that while white supremacist attitudes should not be encouraged on campus, he does not believe Yiannopoulos’ work falls under that category.

“From what I’ve seen of what Milo talks about and stuff, I don’t necessarily consider him to be a white supremacist,” McGinley said.

Many groups on campus disagree; several campus groups signed and submitted an open letter to the university administration at the end of the last week protesting Yiannopoulos’ planned visit. This push was led by senior Sage Carson, Generation Action president and sexual assault advocate. The open letter has been signed by the leaders of 18 separate RSOs, including those of Multicultural Greek Congress, the Muslim Student Association and Haven.

“We ask for an institutional standard to be set that does not allow hate speech to be fostered and promoted on campus,” the letter (which is printed on page 7) states.

The administration responded to the email message and the event will continue as planned.

The Delaware Federation of College Republicans, led by Lipman, maintain that Yiannopoulos is free to express his views on campus.

“Let’s have some context as to who he is and what he does,” Mukhopadhyay said. “The things he does say are very offensive and hurtful and they are not productive for a progressive and forward thinking society.”