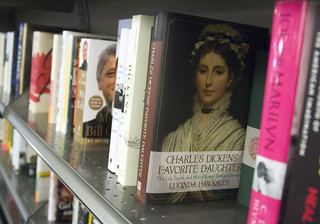 Randi Homola/THE REVIEW
Textbook prices have doubled in the last ten years, but the amount paid by students has stayed the same.

In the past decade, the average price of textbooks has risen 80 percent, overtaking inflation, according to a study from the Bureau of Labor Statistics.

Director of Media Relations for McGraw-Hill Education Brian Belardi, said the rising price in textbooks is merely keeping pace with the increase in higher education costs in general. Statistically, the two have increased at a fairly constant rate over the past years, he said.

However, Belardi said the price increase comes from a desire to give students more value, which requires a great deal of investment. Students may often overlook the fact that the costs of producing textbooks include developing the materials, paying for the rights to images and multimedia content, as well as developing newer online resources.

The shift to digital resources is something developers are focused on in order to offer students the most valuable resources for their money, Belardi said.

“Our biggest concern is offering the most value for students,” Belardi said.

Mathematics professor Rakesh, head of the committee which selects mathematics textbooks for students, said the decision to make changes to editions of textbooks comes once every two or three years through a committee of three.

He said the department does not benefit financially from any sale of textbooks. In fact, Rakesh said price is one of the main considerations when deciding on textbooks.

“Cost is number one,” Rakesh said.

However, when a new edition of books come out, professors are forced to change to them because the older editions may not be available for all of their students, he said. When it comes to packaged products––which students are unable to buy used––he said there is actually a price break in the total cost compared the new products individually.

Janet Broske, assistant professor of museum studies, said she often tries to post resources online so that students do not have to buy books, although she feels sometimes books “have a life after the classroom” and requires those books for student reference.

Statistically, the increase seems staggering, but for students it may not be such a big problem. Data suggests that although textbook prices have risen, students pay about the same as they did ten years ago.

“I spend around $300 a semester on textbooks,” junior accounting major Tess Fanning said.

These findings are similar to a recent article published by National Public Radio’s “Planet Money,” which stated in 2002 students paid an average of a bit over $600 a year on textbooks. In 2012, that number dropped below $600.

Alumna Chelsea Mondock recalled creating Excel sheets every semester to compare used and new prices to rent and buy books at a variety of stores. One year, Mondock said she accidentally purchased “bootleg” books, which had a different cover and a disclaimer that they were not for sale in Canada or the United States.

Both Fanning and Mondock said they were able to avoid paying higher costs through sources such as Chegg, Amazon and Lieberman’s, which offer used books and rentals.

Publishers also offer some more affordable options, including looseleaf and online formats, although those generally cannot be resold at the end of the semester.

Mondock said she would sell books at the end of the semester to make extra money. However, what she would receive was usually far from the original cost.

“I remember getting as little as five to 10 dollars for some books,” Mondock said.