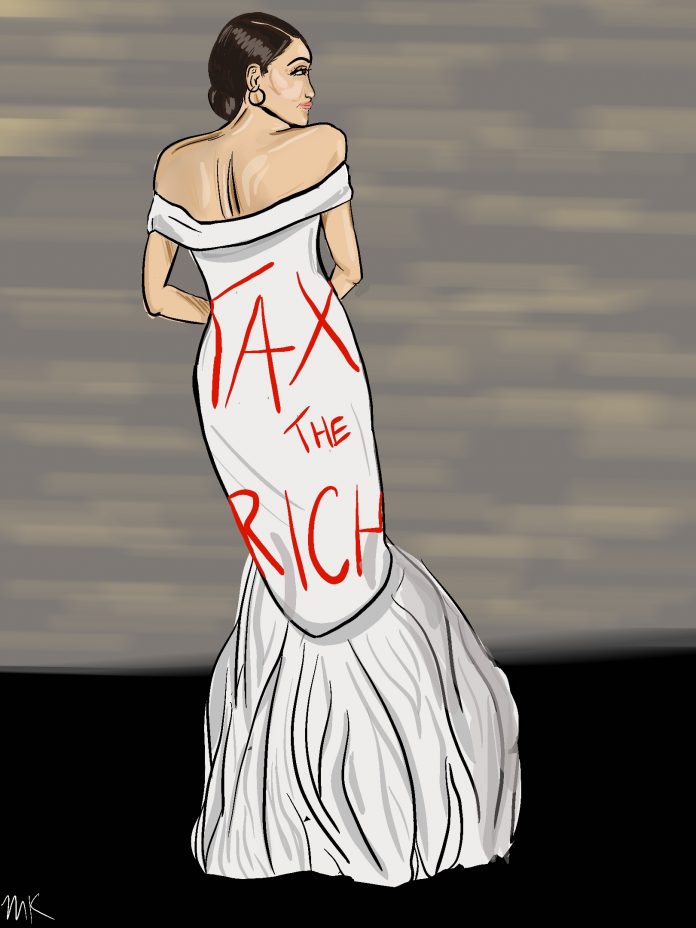 It’s not unusual for Representative Alexandria Ocasio-Cortez, also known as AOC, to have right-wing conservatives criticizing her on Twitter. But in a bizarre turn of events that was not on my 2021 bingo card, conservatives and leftists have evidently joined forces to criticize AOC for her recent appearance at the Met Gala. The main point of contention — her dress.

In accordance with this year’s theme, “In America: A Lexicon of Fashion,” AOC chose to wear a white, floor-length dress with the words “Tax the Rich” written in bold red letters on the back. The dress, designed by Aurora James, has garnered some strong reactions from all sides of the political spectrum, and frankly, it’s difficult to parse through it all.

Donald Trump Jr., former President Donald Trump’s eldest son, jumped on Twitter to brand AOC a fraud for wearing a dress that said “Tax the Rich” while “hanging out with a bunch of wealthy leftwing elites.”

Jeanette Nuñez, Florida’s GOP lieutenant governor, tweets that it is “only in America where a self-described Democratic socialist can wear a $10k “tax the rich” dress, pay $30k for a ticket, and be praised as a champion for the poor.”

Left-wing activists have also been expressing their disappointment in what they believe to be a tone-deaf stunt.

“The essence of the Met Gala is that ultra-rich people pay huge sums to meet and be photographed with celebrities … and then they deduct their night out from their taxes. Why has no one pointed out that Alexandria Ocasio Cortez wore a “tax the rich” dress *to a tax shelter*?” Megan McArdle, a columnist for the Washington Post, tweets.

Memes of AOC’s dress have gone viral, with some comparing it to a Chick-fil-A bag, while others decided to photoshop their own phrases onto the back, like the opening lyrics to Nicki Minaj’s pop hit “Starships.”

“I am so used to doing the exact same thing that men do — including popular male progressive elected officials — and getting a completely different response,” Ocasio-Cortez writes in response to the backlash on Instagram.

She also went on to clarify that she did not have to pay for a ticket to the Gala.

“And yes, BEFORE anybody starts wilding out — NYC elected officials are regularly invited to and attend the Met due to our responsibilities in overseeing our city’s cultural institutions that serve the public. I was one of several in attendance,” Ocasio-Cortez writes.

Indeed, AOC was not the only politician to attend this year’s Met Gala. Others in attendance included New York’s Mayor Bill de Blasio and Rep. Carolyn Maloney, yet they seem to have escaped criticism. New York elected officials are routinely invited to the Met Gala as guests and do not have to pay the exorbitant fee for a ticket.

As a leftist myself, I’m surprised by the amount of hate AOC is receiving from other left-leaning individuals. However, on one hand, I can see where they’re coming from. Without any context, wearing a dress that says “Tax the Rich” to a gala full of the wealthy elite that the working class will never be able to attend looks bad. But the reality is, that’s kind of how politics work.

AOC was not there to rub elbows with the wealthy, rather to lobby for her legislation. When you’re a player in the political arena, you have to know how the game works. And part of that game is trying to persuade someone you disagree with to change their opinion to align with yours.

I would consider AOC’s Met Gala dress as performance art more than anything. Wearing a dress with the words “Tax the Rich” on the back at an event full of mega-rich people who would all be able to see it is certainly provocative. Do I think that the dress is revolutionary and is the turning point for social revolution in America? No, of course not. But I think a lot of people, in their rush to crucify AOC on Twitter, forgot that she is one of the only people in Congress writing up and pushing legislation that will actually bring about positive change.

She has a bold stance on climate change and introduced an outline for the Green New Deal in 2019 (which includes a plan to tax the rich in order to fund it). She was also the only Democrat to oppose the $484 billion COVID-19 relief package, saying it did not provide enough relief to the working class. AOC is doing work that supplements the message of her dress, so I think people are being a bit too liberal with the term “performative activist” when describing her.

“On one hand, y’all say you want AOC to do more within a broken white supremacist, capitalist, and patriarchal system,” Frederick Joseph, author of “The Black Friend” and self-described progressive tweets. “On the other hand, y’all don’t want her to try and find ways to infiltrate that system. American politics are driven by money and influence, that’s the truth.”

I am a firm believer that all politicians are not above criticism and should be held accountable for their actions, no matter what political party they belong to, but this amount of criticism and vitriol just seems a bit unwarranted.

Like the dress of a few words, AOC perfectly sums up the point of her message.

“We all had a conversation about Taxing the Rich in front of the very people who lobby against it, and punctured the fourth wall of excess and spectacle.”

Stephanie Maria is a staff reporter for The Review. Her opinions are her own and do not represent the majority opinion of The Review’s editorial staff. She may be reached at stephmar@udel.edu.