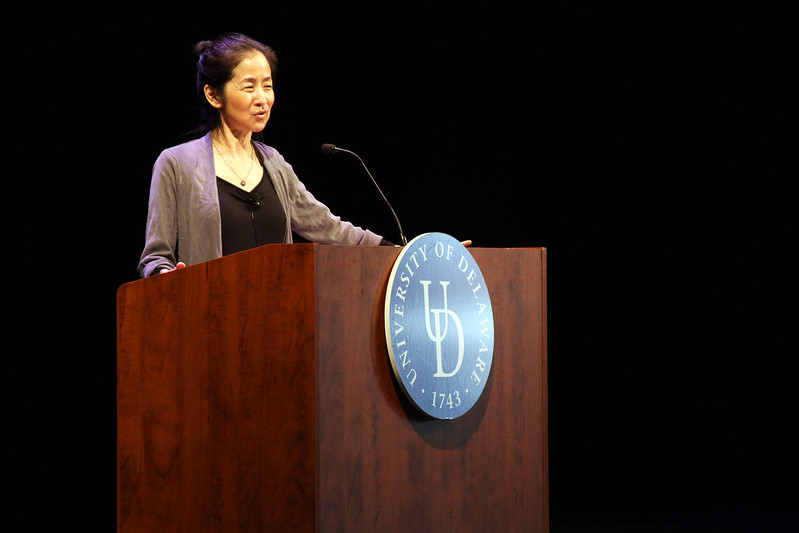 Minji Kong/THE REVIEW
Julie Otsuka, author of the university’s first year common reader “When the Emperor was Divine,” sat down with studies and explained how her life has influenced her writing.

Growing up post-World War II as the daughter of Japanese-Americans, author Julie Otsuka was raised as simply American. Dinners in her household were stereotypically American: meatloaf, tuna casserole, red Jello with marshmallows, beef stroganoff made with sour cream and Campbell’s soup. Otsuka recalled that one of her family’s few “concessions” to their heritage, which many Japanese-Americans were ashamed of following the war — eating fried Spam with rice for dinner when her mother was too tired to cook.

On Wednesday, Otsuka examined some of these experiences growing up Japanese-American when she came to campus to speak about her book, “When the Emperor was Divine.” The novel was selected as this year’s Common Reader, the assigned reading required for freshmen. The event began with President Dennis Assanis introducing two peer mentors from the seminars, seniors Rachel Hewett and Harijt Singh, as well as faculty member Darryl Flaherty before he brought Otsuka on stage.

Assanis pointed out that this was the first time a work of fiction has been selected as the Common Reader.

The novel chronicles the story of a woman and her two children as they are sent away to a Japanese internment camp during World War II while their father remained imprisoned as a suspected pro-Japanese spy. Otsuka based the story on her grandparents, mother and uncle, and their similar situation when Otsuka’s grandfather, a former businessman in San Francisco, was arrested as a suspected spy for the Japanese.

Every year, the First Year Seminar (FYS) Office selects a book as that year’s “Common Reader” and assigns it as summer reading to the incoming freshmen. When the freshmen arrive, they discuss the book in their FYS classes, also known as UNIV101 courses.

“It’s a common experience that they all have when they arrive on campus,” Meghan Biery, the program coordinator for the FYS office, said.

Like past Common Reader authors — who range from Sonia Sotomayor to Bryan Stevenson — Otsuka has earned many honors over her lifetime. She has received a Guggenheim Fellowship, the PEN/Faulkner Award for Fiction and the Asian American Literary award, among many others. Her first novel, “When the Emperor was Divine,” is a New York Times Notable Book and her second, “The Buddha in the Attic,” was a finalist for the National Book Award.

“I was struck by how her memories of the war stayed with [my mother] until quite late in her life, and I think that on some deep and very unconscious level that everything I’ve ever written has been a way of trying to keep the memories of my mother, and what the Japanese-Americans call ‘camp,’ alive,” Otsuka said.

Otsuka began writing at the age of 30 after years of working as a painter and studying art at Yale University. Then, she attended a writing workshop in New York “on a lark” and has been writing ever since. She wrote mostly humor and comedy sketches in the beginning, but eventually, images of the war began to surface.

“I think, for reasons that I didn’t quite understand, the war was something I needed to write about,” Otsuka said.

Freshman Alyssa Schiff is in the Honors Program and read the book over the summer.

“I feel like in history classes you learn a lot about certain things,” Schiff said. “[But] I had never actually seen a personal account from internment so [“When the Emperor was Divine”] was a much more personal take on what I’ve learned about in the past.”

“We’ve looked at this book in the past [when selecting the next Common Readers], and we brought it back because the theme is Japanese internment, but the greater theme is about identifying somebody based on their ethnicity and rounding them up and putting them in these camps,” Biery said. “That struck us as very similar to what is being talked about in this election with Muslims, Muslim Americans and Muslim immigrants.”