Community and sustainability in eating local 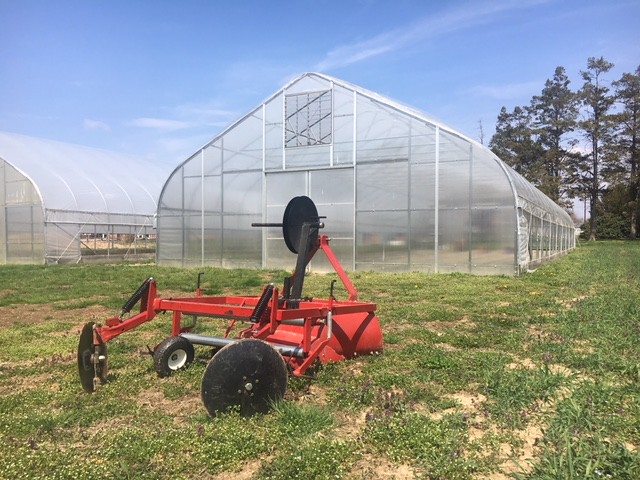 Jan Castro/THE
REVIEW
At first glance, it may not be evident that organic, local produce is being grown right in the heart of Newark.

Farm and natural resources manager Mike Popovich works the organic farm that’s located at South Campus, in a section of the school’s 350-acre agricultural college. The farm’s small plot of land now finds itself flanked on all sides by the university’s expansive sports complex, towering new research facilities of steel and glass at the Science, Technology and Advanced Research (STAR) campus, and the newly-reconstructed Amtrak train station.

At first glance, it may not be evident that organic, local produce is being grown right in the heart of Newark.

Nevertheless, Popovich spends his days on the farm, accompanied by a small team of helping hands (including interns in the summer), cultivating rows of produce, calculating fertilizer or manure application, tracking down pests and invasives or giving crash courses on organic farming to visiting classes.

“I think it’s important that people are connected with their food, and anything that we can do here that augments that is ultimately important,” Popovich said. “We’re one of the few universities to have the farm connected, actually, to the school.”

Popovich himself is heavily involved in the local food scene. Less than a mile away, he sells produce at the farmers market held by the Newark Natural Foods Co-op every Sunday outside of the store’s location.

Popovich is also a purveyor for local gastro-pubs like Grain Craft Bar + Kitchen and Two Stones Pub, both in Newark, and Ulysses in Wilmington.

He supplies the university’s fine dining bistro, Vita Nova, and has increasingly done business with Aramark, the national food service corporation which serves as the primary food supplier for the university. Occasionally, the university’s catered functions and events will serve offerings from Popovich’s farm.

This small pocket of local farming, in fact, represents something greater than the quantifiable acreage of land, or the profitability of its harvest. The organic farm offers an educational opportunity for students to reconnect with their food by having access to a space where they can experience firsthand the origins of a locally-grown tomato, pepper or sweet potato.

Today, many dietary practices contain considerable overlap in the realms of sustainability, environment or health, such dietary choices, restrictions or labels usually signaling some form of “awareness” of choice. That is, veganism, vegetarianism, organic, non-genetically modified organism and fair trade, among others.

But the local foods movement, sometimes called the locavore or farm-to-table movement, strikes at the core of one fundamental awareness: An awareness of where food comes from.

Although the global economy has since enabled, perhaps, the possibility for all New England supermarkets to carry pineapples in the winter, the convenience of access is at the expense of a cognizance of origin and place.

As the idea of eating locally continues to become a more popular notion in modern American dietary culture, more and more are looking locally in an effort to repair this relationship with one’s food, or to adopt a more sustainable, whole foods diet. Consequently, farms and small businesses are seeing growing potential in accessing this new market for local consumption.

“I think there’s been a shift lately, people are getting away from organic and are going more local,” Popovich said. “I think we’re ideally situated for that.”

Distance is the central metric when venturing to calculate the sustainability of a local food. For example: An apple traveling 300 miles from a large-scale monoculture represents a hundred times increase in carbon emissions from transportation than if it were to travel three miles from a local orchard.

However, a 2018 study of the global impacts of food production published in the academic journal Science Magazine finds that transportation only accounts for, approximately, 6% of the total climate footprint of food production.

“In general, what you eat matters a lot more than where it comes from,” The New York Times concluded in a comprehensive 2019 article on the relationship between food and climate change.

Other factors still complicate the philosophy of pledging to abide by a hyper-local diet.

If, for example, a local food was grown organically (which is increasingly the case for small, locally-oriented farms like Popovich’s,) it may require additional carbon emissions in the form of organic manure distribution, which can further result in nutrient runoff and algae blooms, to the detriment of the local ecology.

One of Popovich’s loyal customers and close friends is Bill Hoffman, who co-owns The House of William & Merry in Hockessin with his wife, Merry Catanuto, and has been doing business with the university’s farm for five years.

“Anything and everything that is available, I’m interested in,” Hoffman said.

Since opening in 2011, The House of William & Merry currently stands as one of the top-rated restaurants in New Castle County, perhaps signaling the importance of local sourcing to flavor, or terroir, as Hoffman described.

Hoffman maintains a strong local food philosophy, not serving anything out of season, and sourcing from a diverse line-up of purveyors, including local farms like the university’s, but also regional foragers for things like wild mushrooms.

Across seasonal variations, Hoffman will also take advantage of preserved fruits and pickled foods, which roll over onto their fall menu from summer preparations. But even despite these efforts, Hoffman concedes that there are culinary limitations to staying strictly local.

“When we started our restaurant here, we started really with the intention of trying to stay as hyper-local as possible,” Hoffman said. “And the problem with that is, not to take this the wrong way, the Delaware palette in general is not necessarily attuned to the more avant garde types of dishes.”

As a business, there are also significant financial limitations to dealing with mostly local sourcing, Hoffman explained.

“To stay hyper-local here, it can be done,” Hoffman said. “It’s definitely one of those things that we always tease with. And to cook that way, it’s definitely more expensive. It costs more to bring and forage products versus just ordering them from, per say, a Sysco.”

With the fall now in full swing, Hoffman lists some of their seasonal offerings: Squashes, kale, sweet yams, beets and brassicas like varieties of cabbage, cauliflower, broccoli and turnips.

Wild ramps, a species of wild onion, are an example of a native Delaware plant which Hoffman takes advantage of during their brief month-and-a-half availability in late spring.

“One of the number one wild foraged greens in Delaware, and one of the most special things about being in Delaware, are wild ramps,” Hoffman said. “They are a true delicacy.”

Local foods in Delaware are also not limited to produce. Situated in the Mid-Atlantic, Chesapeake Bay region, the state has access to an array of local seafood selection: Flounders, flukes, scallops and blue crabs.

At his own restaurant, Hoffman serves a chicken-fried blue catfish, an invasive catfish species which presents an interesting solution to the problem of invasives: To eat them. The removal of invasives as a source of food has dual utility by both helping the ecology of the Chesapeake Bay while also filling diners’ bellies with local seafood.

For Bob Kleszics, owner of health foods grocer Harvest Market Natural Foods, also in Hockessin, offering local foods is a way to emphasize the importance of having a direct relationship with producers and small farms in the area. The grocery store carries a selection of 300 to 400 local products.

“We pull most of our local foods from Southeastern Pennsylvania, Chester County, Lancaster County,” Kleszics said. “We do work with a local farm in Hockessin, just a mile away, and we get all our fresh herbs from them.”

The store also faces similar challenges with the seasonally-dependent nature of sourcing locally. When they are available, local strawberries are an extremely popular item that sells out quickly, according to Kleszics. but they are only in season in the region for a three-week span during the summer.

“A lot of people believe that when you get a good, local honey, that’s a raw honey that still contains the pollen grains, that it helps with your allergies,” Kleszics said.

Even still, Kleszics clarifies the store’s definition of local as within 150 miles, although some may identify anything more than 100 miles as regional. Popovich, on the other hand, supplies exclusively to New Castle County. Hoffman, despite ambitions to maintain a hyper-local menu, is better off sourcing fennel from California.

Eating locally is invariably more complex than how it is represented or advertised, perhaps, alongside similar, potentially overlapping labels, such as “organic.”

Although it is not definitively integral to achieving sustainability through one’s diet, what local foods do offer is an engagement with local economy and community and, perhaps more importantly, an avenue for understanding where food comes from when these connections risk becoming abstracted, or completely severed.