A few weeks ago, a panel interview conducted by the New York Times with five experts received a flurry of attention on social media for its suggestion that large gatherings such as concerts might not be reintroduced until Fall 2021.

Needless to say, people were not pleased.As much as it pains me that I won’t be able to go nuts in the front row of a Doja Cat concert in the foreseeable future, I take solace in knowing that there’s a plethora of concert movies I can view from the comfort of my quarantine.

These concert movies are recordings of live performances that allow renowned filmmakers to flex their skill and transport the audience to another time and place, highlighting the headlining acts and blurring the line between documentary and home video.

To help tide you over, I’ve put together a few of my favorite concert movies you can watch on repeat for the next two years.

Okay, so I lied, because this one isn’t technically a “concert movie.” It’s just a recording from one of Sugiyama and company’s performances. However, it is simply too good to exclude, and my opinions shall not be restrained by frivolous technicalities.

One of my favorite pastimes over the last couple of weeks of our dear quarantine has been listening to an hours-long playlist created by comedian/rapper/writer/Twitter exile Zack Fox, whose taste in music spans just about the widest range of genre I’ve ever come across.

Among the many gems I’ve found is “Dear Breeze,” a track off the 1985 album “Another Summer” by Japanese city pop group Kiyotaka Sugiyama and the Omega Tribe.

It is, quite frankly, wonderful. And it led me to the even better discovery of a live 1986 performance.

“The First Finale” concert begins with an electrifying burst of energy and never lets up, even as Sugiyama transitions from soulful ballad to more traditional pop styles.

If you need something to put on while making dinner or contemplating the finite nature of existence, this performance is the perfect choice, thanks to its breezy melodies and confident sounds that are always satisfying.

Two years before the infamous Woodstock Festival became the defining point of the 1960s counterculture , John Phillips of folk rock band The Mamas and the Papas organized an artist-led music festival in sunny Monterey, California.

The resulting concert series became a milestone in California’s history as a focal point of said counterculture and helped kick off the 1967 “Summer of Love,” a mass gathering of hippies, flower children and free spirits in San Francisco.

The Monterey Pop festival’s heavy promotion and popular interest drove the creation of a documentary film that covered the performances. The product, an eponymous work that would include all of the major acts, was directed by D.A. Pennebaker, who had covered a couple of Bob Dylan tours a few years earlier.

The festival marked the first big American performances of the Jimi Hendrix Experience, The Who and Ravi Shankar. Janis Joplin played to her largest audience yet, while Otis Redding dazzled the crowds and rocketed into stardom.

“Monterey Pop’s” greatest strength, beyond the raw talent of its headliners, might just be Pennebaker’s skill in evoking the very “Summer of Love” that the festival began.

Shankar’s performance during the closing ten minutes might be the most captivating sequence of the film.

The renowned sitar player sits barefoot on stage, commanding the attention of thousands in the audience. The crowd sits totally enraptured by Shankar’s skill, bursting out with cheers and applause at each sudden shift in tempo that adds further complexity to the melody.

The performance is nothing short of astonishing; by the end Shankar and his supporting tabla player, Alla Rakha, are engaged in a frenetic back-and-forth of percussion and strings that gives way to massive cheers and a standing ovation.

Much of “Monterey Pop’s” magic is in its ability to transport you to the festival’s audience and embrace the feeling of spiritual kinship that drove the “Summer of Love.” To be a part of others is the human experience. During this current period marked by isolation, “Monterey Pop” is a wonderful reminder of connection.

Where to Watch: Streaming on the Criterion Channel or available for purchase from YouTube, iTunes and Google Play.

Director Jonathan Demme, perhaps best known for 1991’s “The Silence of the Lambs,” highlights the undeniable excitement of David Byrne and Talking Heads by interfering as little as possible with that start-to-finish marathon of music that makes “Stop Making Sense” a triumph in documentary filmmaking.

David Byrne and the Talking Heads are notable for their eccentric styles and avant-garde performances. Over the course of the film Byrne sprints around the stage, changes into a cartoonishly oversized suit and dances with a floor lamp.

Even the stage design is a work of art. What begins as a solo performance with Byrne and an acoustic guitar, evolves song-by-song into the full eight-person roster of the Talking Heads, with modular components of the group’s instrument line-up being introduced as needed.

Beyond the physicality of the show, the Talking Heads often play with lighting to a great effect. Midway through the film, the venue lights go dark and the band is illuminated by lights at their feet.

During the song “What a Day That Was,” originally released by Byrne’s solo album and modified for this performance, Demme pulls in on the faces of the Talking Heads, still lit up as if they’re telling ghost stories around a campfire. The camera jumps from player to player, lingering on backup vocalists Lynn Mabry and Ednah Holt, as they provide truly amazing gospel-like harmonies.

Demme captures with a cool confidence the band’s ability to carry the show on their own without any technical flourishes of the camera. There’s no interruptions because there aren’t any needed. The pacing of the concert series, shifting gears on the fly with ease, is incredibly efficient.

Demme’s ”Stop Making Sense” is one of the finest documentaries I’ve ever seen; it perfectly encapsulates the power of a concert movie. The Talking Heads will no doubt have you excited, moving and ultimately grooving.

Where to Watch: Streaming on Amazon Video and the Criterion Channel or available for purchase from YouTube, iTunes and Google Play.

“The Last Waltz” is, on the surface, a noticeably different type of film for Scorsese that casts its view on the 1976 farewell concert of The Band, a Canadian-American band that straddled the narrow line between folk, country, and rock.

At the time of the concert, The Band had been on the road for 16 years. Robbie Robertson, lead guitarist and songwriter, had convinced the other members to put on one last show before they called it quits on their touring days.

The venue, Winterland Ballroom in San Francisco, and a veritable who’s who of special guests, from Bob Dylan to Neil Young to Eric Clapton, were arranged. The Band’s tour manager, Jonathan Taplin, had served as a producer on Scorsese’s “Mean Streets,” and floated the idea of a Scorsese-directed documentary on the show.

The result: 116 minutes of pure skill, showmanship and one of the finest assemblages of musicians ever put to screen, was a hit. “The Last Waltz” is not, however, a typical concert movie. Scorsese’s influence over the structure and tone of the film is as plain as The Band’s talent.

Beginning with an encore performance of their final song of the show, played to an empty venue, the film presents a selection of the Winterland songs and other studio recordings interspersed with two to three minute conversations between Scorsese and The Band’s members.

These conversations, during which the five members of The Band share different anecdotes and their own feelings on their long history working together, imbue the film with a bittersweet feeling of regret and satisfaction. That these feelings are channeled into some of the most wonderful songs ever written, such as the ensemble rendition of the existential expression of relief “I Shall Be Released,” make “The Last Waltz” all the more powerful.

The Band, supported by some of the most talented musicians of their time, put on an incredible show that November night in 1976. Scorsese’s “The Last Waltz” effortlessly captures the rousing mood of the show and proves itself a must-watch in the concert movie genre.

Where to Watch: Streaming on Amazon Video or available for purchase from iTunes.

It’s a complete bummer that live concerts won’t be a thing for what may be another two years, but there are plenty of ways to experience a similar sense of delight and to groove your heart out to all of the concerts currently available online.

Or, if you’re more like me, you can simply watch each of these films laying motionless in a swaddle of blankets like a newborn child. We all live different lives, okay? 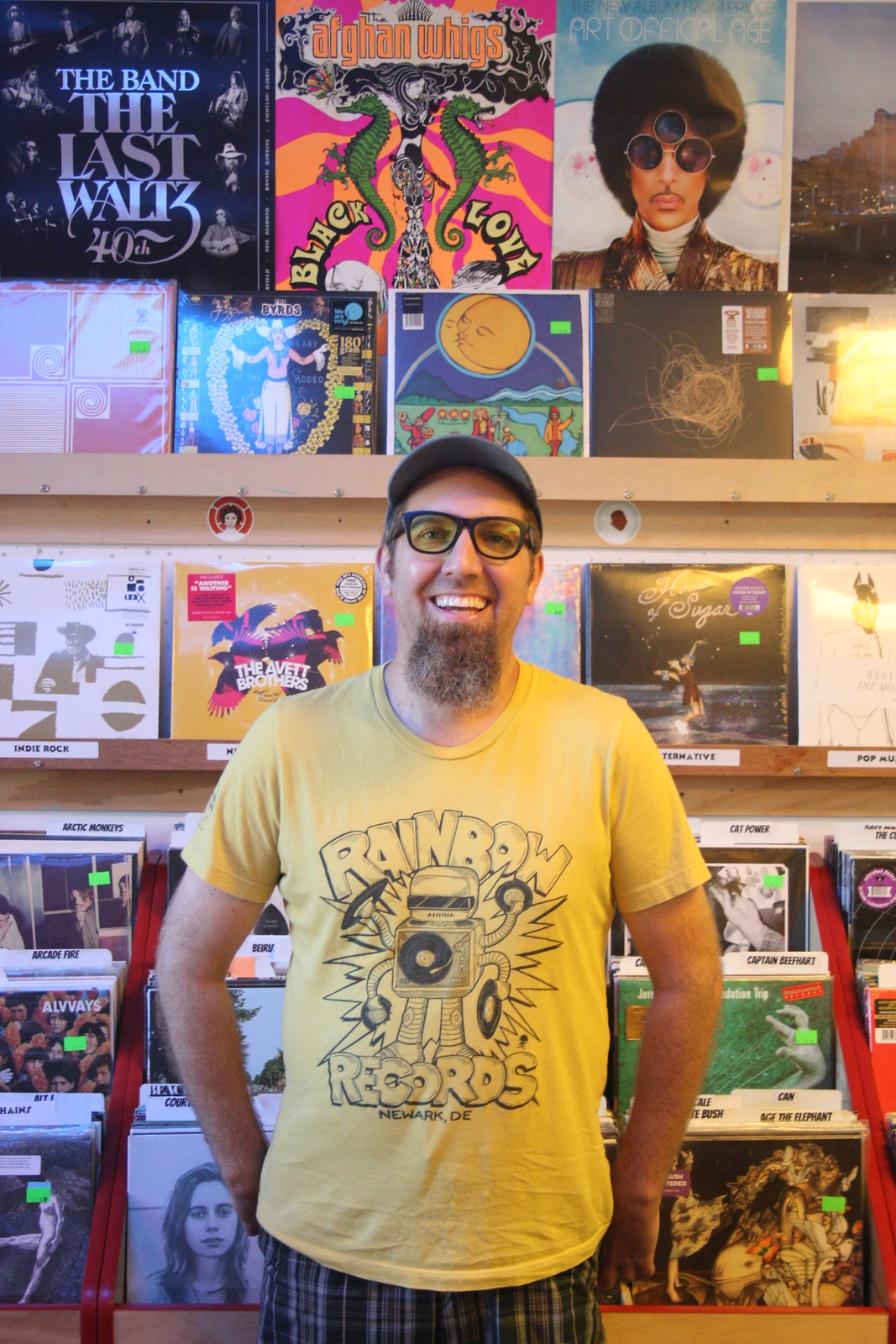 Rainbow Records is becoming more than just another record store.