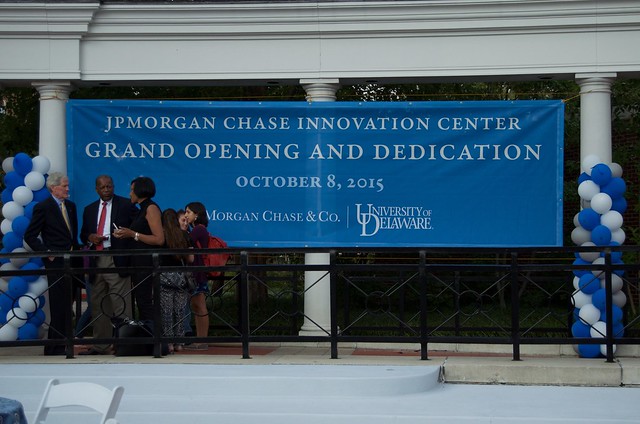 Melisa Soysal/THE REVIEW
JPMorgan Chase is one of the university’s collaborations with corporations to foster learning and research.

Large corporations have been financially involved with the university for most of its history. DuPont, Gore and JPMorgan Chase are just a few examples of companies that have made significant financial contributions to the university to help fund research, new labs and academic buildings.

“As you walk around campus, you see the names of large companies on some of our signage,” Fred T. Hofstetter, an education professor and former Faculty Senate president, said.

He said the front of DuPont and Gore Hall mimic each other, balancing the prominent namesakes on The Green. Meanwhile, JPMorgan’s presence is growing with its new addition to Alfred Lerner College of Business and Economics.

According to finance professor Andrew Fields, corporate presence at the university is a “win-win for everybody.”

“Look at JPMorgan Chase, for instance,” Fields said. “They just announced this week that they’re going to add 1,800 jobs in Delaware, which is a huge increase for the state and it’s very, very important.”

Hofstetter said the amount of university sponsorship is increasing, and he described the university’s relationship with corporate investments as “symbiotic.”

“I have seen more and more corporate leaders step up to make significant investments in what we have here at UD,” Hofstetter said.

Hofstetter said corporate sponsorship helps make up for budget cuts from state revenue that needed to trim its support of higher education because of increasing costs in other sectors—most noticeably in the rising cost of health care. Because of these donors, he said the university is in better shape than other colleges in the country that needed to cut down on budgets and staff members to remain solvent.

Robert Opila, professor of materials science and engineering, said corporate sponsorship is an excellent way for students and faculty to utilize expensive state-of-the-art labs and equipment to advance their research. However, these large corporations have some power in determining what will be researched and whether or not that study can be published.

“Sometimes, and in fact—rarely,” Opila said. “You may not publish a result because it jeopardizes company secrets.”

“In the sciences, it is very expensive to set up a lab,” Fields said. “For a lot of faculty on campus, outside funding and grants is very important to their research.”

The university is fortunate to have a growing number of corporate donors that want to invest in the university’s future, Hofstetter said.

He said with an increase in corporate investments, the university was able to successfully survive the recession in ways other colleges could not, and the university’s faculty need this funding to advance research and educational opportunity, which in turn can positively affect Delaware’s economy.

“These donations are a strategic investment not only for our campus, but also in the future of our state, which needs to invent new ways of raising revenues, and which looks to a strong and vibrant University of Delaware to help reinvigorate the state’s economic engine,” Hofstetter said.