Courtesy of Delaware Athletics
Diana Dunn runs up the rolling hills at White Clay Creek State Park on the final lap of her run at the Delaware Invitational in September.

At West Chester University, Diana Dunn had not only outrun the competition, but her teammates too.

Dunn’s fastest underclassman teammate finished nearly two minutes behind her at the team’s cross country championship. By the end of her sophomore season, she’d bested her next fastest teammate overall in the 5,000 meters by nearly the same margin.

Being the fastest on the team brought on individual glory, but also provided its own set of challenges. How far can intrinsic motivation take you, before others are needed to elevate your performance to where you want it to be?

“I wouldn’t train with the girls as much,” Dunn said. “I would do my own thing — my long runs, my regular runs, my workouts — I’d be by myself and I didn’t really have girls to push me along.”

Dunn wanted more. She wanted a team. So with her coach’s support, Dunn made the jump down 202 from West Chester to Delaware to join an up-and-coming Blue Hens squad.

Now, in her junior season, she is feeling stronger and running faster than ever before.

“I was really looking for a girls team, and having that connection — to be able to get everyone through every workout,” Dunn said. “Throughout the season so far, I couldn’t have done half of what I’ve done without them.”

Dunn has finished as Delaware’s top runner at all three meets she’s competed in this season. Though she has not cracked her personal best, a 21:24.00 6k at the speedy Paul Short Run at Lehigh University in 2017, she and the rest of the Blue Hens top seven are primed for their best go of the season at Friday’s CAA Championships, held at Bethpage State Park in New York.

There Delaware will attempt to accomplish what they have never done before: win a CAA title.

“There’s a lot of teams that are in a similar position as us, that believe they have a chance to win this year,” cross country Head Coach Ryan Waite said. “I wouldn’t say we’re the favorites by any means. I would say if things go right for us, then maybe it could happen.”

Twelve months ago, Delaware was in a similar position. On the cusp of CAA contention, Liz McGroarty, one of the fastest Delaware distance runners ever, gave the Blue Hens a champion-caliber lead harrier, but the gap between her and the rest of the scoring top five was simply too great.

The good news heading into 2018 was that six of the top seven runners would be returning. The bad? McGroarty, the top stick, was the one leaving.

“We went after some big recruits last fall, we went for a home run and we struck out, I guess you could say,” Waite said. “We went big time and we went for five or six really good girls. For me, usually the hope is if we can land half of the people we go for, then we did a good job of recruiting. So to not get that half it was kind of discouraging and a little depressing like, ‘oh man what’s the future now? We’re hurting.’”

As he recalled the previous winter in his office (perhaps better described as a nook) at the Delaware Field House, Waite snapped his fingers.

“An email from Diana Dunn with her release saying she’s looking at transferring and wanted to see if Delaware would be interested. I think I got on the phone that night and got the ball rolling. It couldn’t have come at a better time. I think it rejuvenized the hopes for this season and for the future.”

Courtesy of Delaware Athletics
Dunn crosses the line at the Delaware Invitational at White Clay Creek State Park in September.

As Dunn visited schools, including Delaware, at the end of the indoor track and field season, she was concerned with the adjustments coaches would make to her training regimen and the teammates she’d get to run with. Her connection with Waite and the team on the visit and Delaware’s proximity to her hometown of Media, Penna. swayed her decision.

“The training has been a lot different, but I feel like I’ve adjusted well to it,” Dunn said. “Doing a lot of higher mileage than what I’m used to. Doing that has made me a lot stronger as a runner.”

Dunn peaked at 50 miles in a week at West Chester. In her training this summer, that’s right around where she averaged. The intensity of her workouts has also been ratcheted up leading into the championship meet.

“It’s not so much that the system is really different than what she was doing before, maybe just slightly different, but I would say that probably the biggest benefit [Dunn] gained is having teammates that are closer to her level and that was the main reason she approached us in the beginning,” Waite said.

Although Dunn is still fastest runner on her team, it’s no longer by a wide margin. The Blue Hens second-best runner Roxanne Ramirez is less than a minute back. At Delaware’s most recent competition with most of their top seven, the Nuttycombe Wisconsin Invitational, the team’s one to five split was less than a minute and a half.

“I’d say Diana is on the same caliber [as McGroarty] but we work out together and it’s helped to close that gap,” Ramirez said. “It’s been really helpful, it’s been awesome. I know she’s really grateful to have this team to run with because she was kind of alone.”

When Dunn joined the team at the beginning of this fall, she and Waite made it a point of emphasis to work with her new teammates, even in some ways holding Dunn back early on.

“I feel like Diana handled everything exactly right in coming in knowing that she would likely be our top girl,” Waite said. “She didn’t come in and try to be a world breaker in the first couple workouts and just leave everybody in the dust and kind of say, ‘I’m here.’

Courtesy of Delaware Athletics
Dunn moments after her race at the Delaware Invitational.

After holding back early, closer to championship season she then tested her fitness away from the pack. In one early morning workout, running solo with only Waite in attendance since she slept in, Dunn ran five mile repeats. The final one, which was under 5:20, was faster then her high school personal best.

“I just realized right there I knew I was in a lot better shape than I was before this early in the season,” Dunn said.

In many ways, Dunn has filled the proverbial shoes of McGroarty, performing at or beyond McGroarty’s level while helping pull the Blue Hens pack closer. The next step for Delaware’s squad is to continue to add to the team’s depth. Likely five of Delaware’s top seven, including Dunn and Ramirez, will return for next season. A bleak future, suddenly looks very bright.

“What’s best about both of them [McGroarty and Dunn] is it really is for the team,” Waite said. “They wanna have as much individual success as they can but they’re also motivated to have that individual success for the good of the team, which propels them to higher heights than they maybe would’ve achieved otherwise. It also helps the other girls on the team want to achieve more for them.” 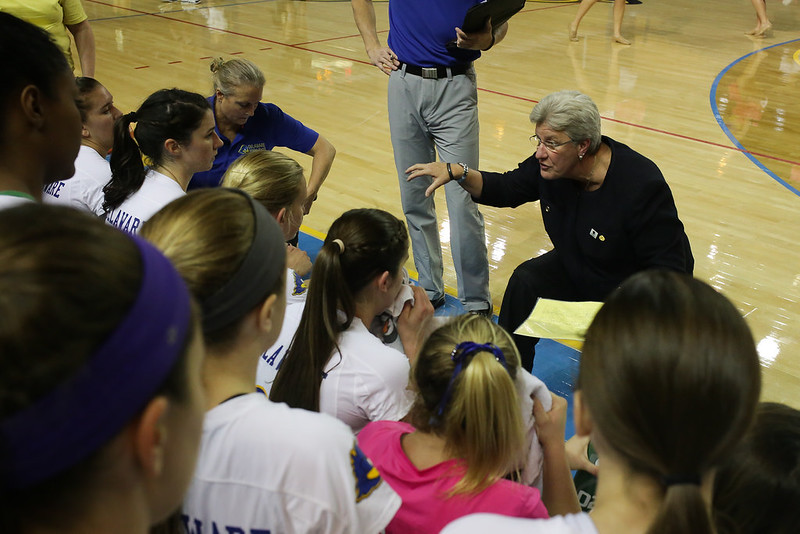