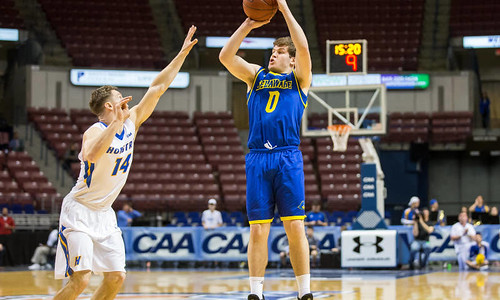 In his first seven games of the season, freshman Ryan Daly came off the bench and averaged 8.6 points per game. In his first career start on Dec. 28, he scored 18 points and never looked back.

Daly would go on to start for the remainder of the season and lead his team in scoring, averaging a team high 16 points per game with 11 20-plus scoring games. He also led the Blue Hens in rebounds, grabbing 7.4 of them per game.

The Ardmore, Pa. native was named CAA Rookie of the Year last Thursday, just hours before Delaware faced off against Hofstra in round one of the conference tournament.

When he was notified of his selection Thursday night, Daly said it “feels good” to win conference rookie of the year, but he was focused on his team’s conference tournament matchup.

The following day, he promptly dropped 27 points in the Blue Hens’ first round upset over Hofstra. Against top-seeded UNCW on Saturday, he once again willed his team to a competitive game against a top team, scoring 24 points.

“Ryan is very deserving of this honor, and we are extremely proud of what he has accomplished this season,” Head Coach Martin Ingelsby said.

After Delaware’s loss to UNCW, much of Ingelsby’s press conference was devoted to talking about next year and what his team has to look forward to. He pointed to Daly as someone who will be greatly counted on next season.

In his first season as Delaware head coach, Ingelsby registered a 13-20 overall record and finished in the ninth spot in the CAA before upsetting Hofstra in round one.

Daly, the leading freshman scored in Delaware men’s basketball history, will return for his sophomore season with high individual expectations, and will be expected to launch his team forward in the CAA.

The majority of the team’s starting lineup will return next season. Graduating seniors include Cazmon Hayes, Devonne Pinkard, Barnett Harris and Curtis McRoy.