Ryan Daly is going back to Philadelphia.

The former Delaware guard and CAA Rookie of the Year announced on Twitter Sunday night, that he will be transferring to St. Joseph’s University.

Daly tweeted: “thanks to all the schools who have reached out to me throughout the transfer process. I have decided to transfer to St. Joes University to finish my college career #THWND !!!” The tweet was accompanied by a picture of Daly in a number zero red Saint Joseph’s uniform and a picture of the interior of the Hagan Arena, the Hawks’ home court. #THWND stands for St. Joseph’s rallying call, “The Hawk Will Never Die.”

According to reports from Borzello and Rivals.com’s Corey Evans, Daly was also in contact with North Carolina State, Nevada, St. Bonaventure, Massachusetts, Charlotte, Ole Miss, San Diego, George Mason and CSU Bakersfield after his decision to transfer was made public on March 23.

In a statement made on that day, Daly said, “I believe [transferring] is the best thing for me personally. This is not a reflection on the University or the basketball program.”

Daly will have to sit out next year due to NCAA transfer rules before playing out the final two seasons of his eligibility.

St. Joe’s long presented a logical fit for Daly. He is a graduate of Archbishop Carroll High School, which is located just outside of Philadelphia in Radnor, Pa. His high school and his new university are less than 10 miles from one another.

Daly also has strong family ties to the Hawks. His grandfather and father both played at St. Joe’s and his grandfather also served as Head Coach from 1981-1989. His mother also graduated from the university.

After averaging 21.7 points and seven rebounds in his senior season at Archbishop Carroll, Daly, the Philadelphia Catholic League MVP, gained minimal traction on the recruiting front. He originally committed to Hartford, but soon after backed out and remained unsigned late into May 2016.

“Since freshman year if you asked me if there was a school I wanted to go to in the area that I could maybe, hopefully, one day be that good, Delaware would be no doubt my first one,” Daly told City of Basketball Love after his commitment. “It’s always been my dream school, so when they offered, it was like I had to do it.”

At the beginning of his freshman year, Daly was an unheralded role player off the bench. Then in his third collegiate game, back in Philadelphia, he carried the Blue Hens’ through a see-saw match in a tiny gym at La Salle University. Daly showed flashes of his physicality inside, while burying three of seven attempts from deep. In 30 minutes off the bench, Daly scored 19 points and pulled down seven rebounds. Even though the Blue Hens lost, 74-68, the game marked a clear turning point in Daly’s usage and minutes.

Once he had the opportunity, the freshman never looked back.

“We came back from Christmas, he was coming off the bench and I told Ry at practice, ‘I’m not gonna mess around anymore, we’re gonna put you in the starting lineup,” Ingelsby said in November 2017 on WVUD’s Blue Hen Sports Cage. “We knew we were getting a good basketball player, he comes from really good bloodlines, but I would be lying to you if I told you I knew what we were gonna get out of him.”

Throughout his Delaware career, in the brightest spotlight, Daly rarely faltered.

In another signature moment on Feb. 9 2017, with the Blue Hens trailing Elon 59-57 with 15 seconds remaining, Daly, from the left wing, drove to his right and hit a stepback jumper after a pump fake sent Elon’s Dmitri Thompson flying by him. The shot, from just inside the three-point arc, sent the game to overtime, during which Delaware pulled out the win.

A week later, against Drexel, with his team down 65-67, Daly drilled a game-winning three with 12 seconds remaining. The freshman exuded a calming presence over the left side of the floor as he navigated an Eric Carter pick and stepped back from defender Austin Williams, who came over the screen on the switch.

In both occasions, Daly established himself as the Blue Hens’ go-to guy.

“He’s a gamer,” Ingelsby said of Daly after the Drexel game. “We knew we’d get the ball in his hands.”

Daly finished the season sixth in the CAA in scoring with 16.0 points per game and fifth in the CAA in rebounding with 7.4 rebounds per game. Both marks led the team and were Delaware freshman records. In the CAA tournament, Daly posted back-to-back double-doubles as the Blue Hens defeated Hofstra in the first round, 81-76, and lost to the eventual champion, UNCW in the quarterfinal round, 91-82. He was the only player named to the all-tournament team that did not play in the championship game.

After the game UNCW Head Coach Kevin Keatts said, “Ryan Daly is playing as good basketball as probably anybody in the country.”

“When they talk about Delaware basketball, the first guy they talk about is Ryan Daly,” Ingelsby said after the season-ending loss to UNCW. “You know quite frankly, he might be the second and third guy too.”

In his second season, an ankle injury hampered Daly, causing him to miss four games. The sophomore, at an inch taller than his freshman year, still did the heavy lifting for the Blue Hens, averaging 17.5 points and 6.2 rebounds. Daly ended his Blue Hen career with exactly 1,000 points.

In Daly’s wake, Delaware will return freshman guards Ryan Allen and Kevin Anderson and add incoming freshman Ithiel Horton. Allen was the 2018 CAA Rookie of the Year, after averaging 15.7 points per game — second in Delaware history among freshman, behind Daly. Anderson turned in an impressive 11 games, during which he looked like the CAA Rookie of the Year front-runner, before a knee injury prematurely ended his season. Anderson averaged 13.7 points and shot 44.7 percent in his brief run.

In addition to Horton, Delaware has also received a commitment from East Catholic forward Matt Veretto. Delaware has four open scholarships. Previously, Ingelsby has expressed interest in bringing in a graduate transfer, who would be eligible to play immediately, and additional high school seniors.

In two years, the Delaware head coach has accumulated a 27-39 record. In each of his seasons, Delaware has won a CAA tournament game, but has not advanced past the quarterfinals. 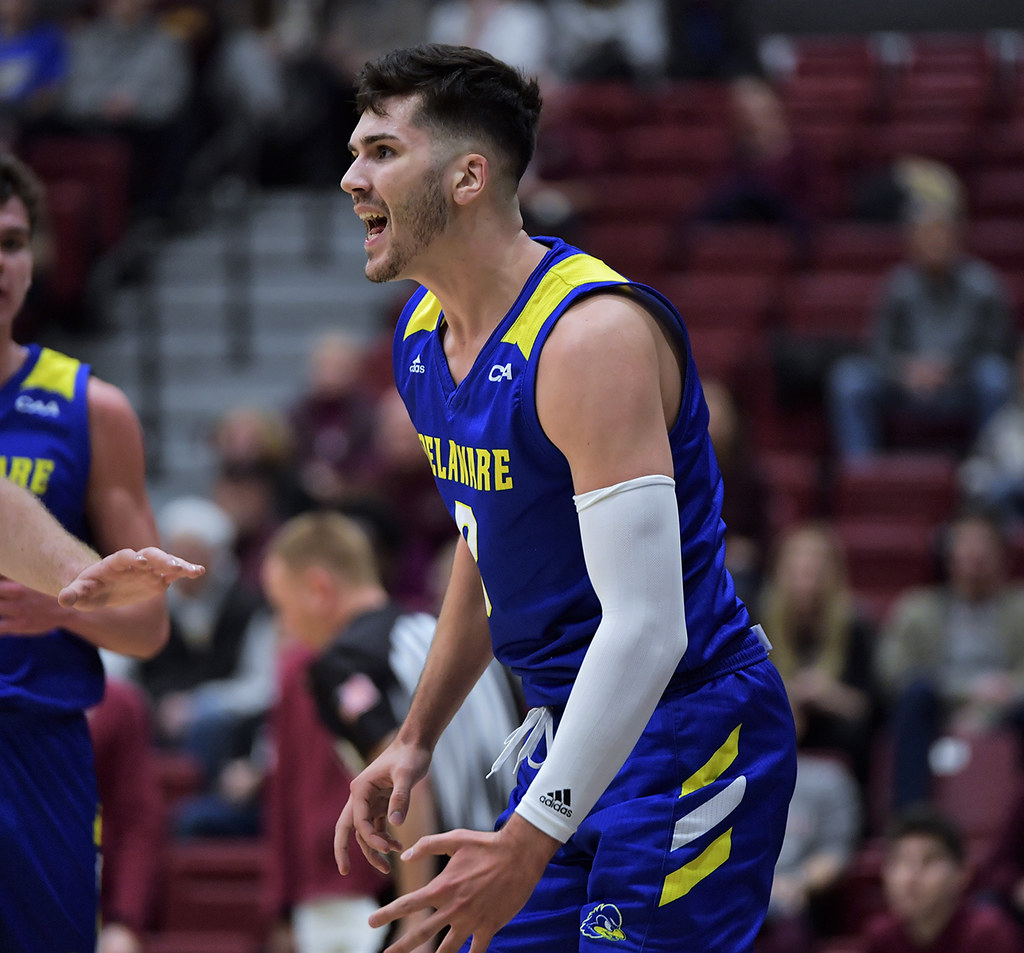 Delaware mens basketball, led by redshirt junior guard Nate Darling, is off to a hot start at 6-0. Darling is second in the NCAA with ... 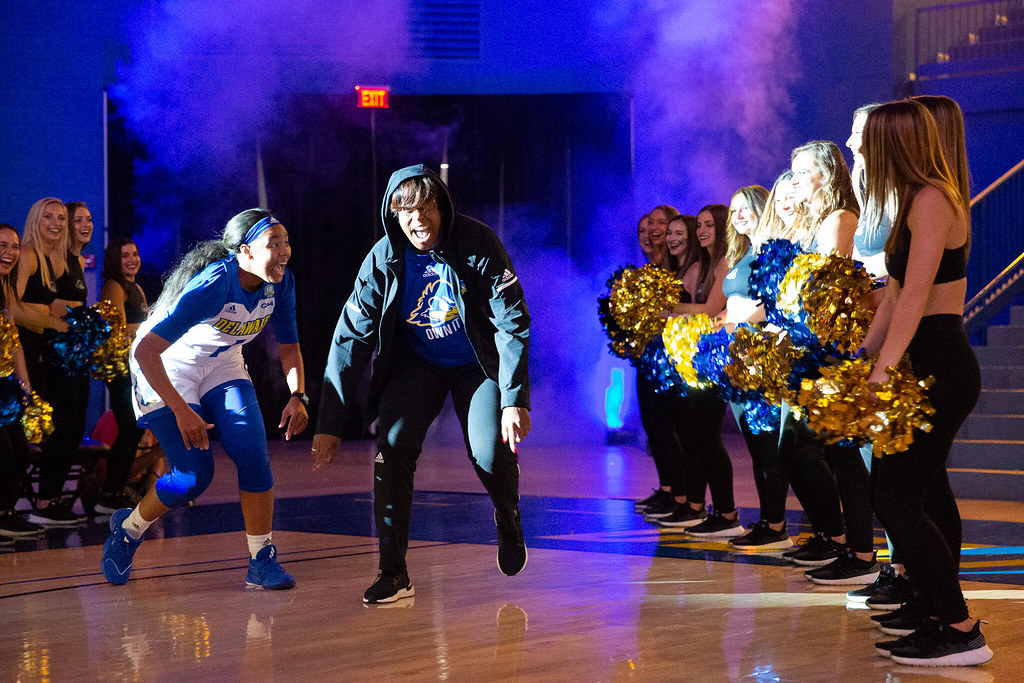 The Blue Hens men's and women's basketball teams hyped up their upcoming seasons with the Halloween Hoopla event on Wednesday night.