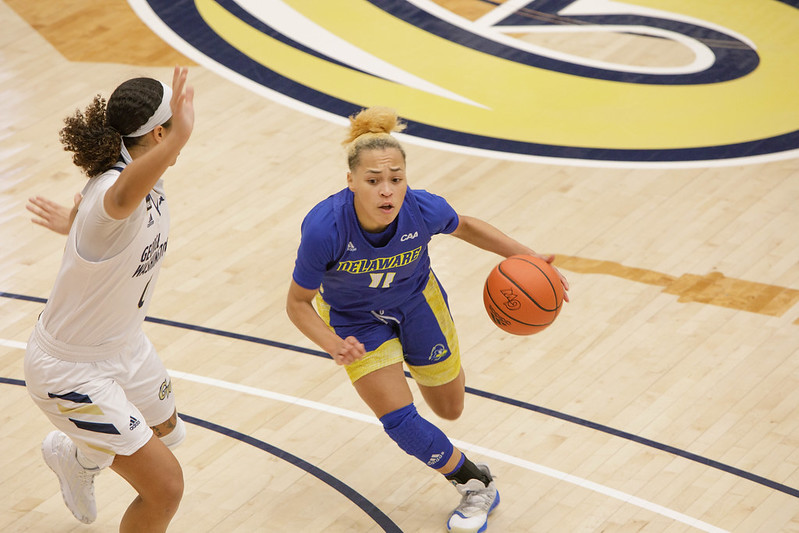 The Blue Hens women’s basketball team lost their first game in a road matchup at George Washington, early Sunday afternoon. After leading for nearly the entire first half, Delaware faltered in the second half and could not complete a late comeback to defeat the Colonials.

Streaks of turnovers and fouls plagued Delaware throughout the game. The Blue Hens turned the ball over 21 times and committed 25 fouls, compared to George Washington’s 12 fouls. This gave the Colonials 12 more attempts at the free throw line.

Junior Jasmine Dickey dominated in the first half, with 14 points, 9 rebounds and two steals. Delaware took a double-digit lead midway through the second quarter and went into the locker room up 28-22.

However, Dickey was contained by the George Washington defense after halftime. She did finish as the game’s leading scorer, with 23 points and 11 rebounds, for her first double-double of the year. She is now averaging 26.2 points and 8.7 rebounds per game over the opening four games.

Junior forward Ty Battle picked up her third double-double of the season with 10 points and 14 rebounds. While Dickey and Battle carried the Hens offensively, their contributions were thwarted by team-wide shooting struggles and foul troubles.

Starting point guard Paris McBride and George Washington transfer Chyna Latimer only combined for 6 points on the day. Fellow starter Lizzie Oleary only played 10 minutes after early foul troubles forced her out of the game. Late in the fourth quarter, Oleary picked up her fifth foul and was disqualified.

That fifth foul came on a successful layup by George Washington’s freshman center Ali Brigham, which put them in the lead 55-49. The Blue Hens quickly stormed back, though, with a 7-0 run to take a 56-55 lead, highlighted by a steal and transition layup by senior guard Tee Johnson.

The lead swapped again with 20 seconds remaining thanks to a layup by George Washington junior Maddie Loder. After a timeout by coach Natasha Adair, Paris McBride missed a contested jumper with 8.9 seconds left. The Colonials defense was able to prevent Delaware’s Dickey from touching the ball on that critical possession.

Graduate transfer Jasmine Whitney, who finished with a team-leading 16 points, hit two free throws to extend George Washington’s lead to 59-56. With seconds remaining, the Blue Hens had one last shot to force overtime, but freshman guard Tyi Skinner turned the ball over on a pass from McBride.

Coming into their fourth matchup, Delaware was third in the country in scoring at an average of 96.3 points per game. But on Sunday, they shot 33.8% from the field and 3 of 22 from three-point range.

Perhaps the best takeaways from Sunday’s loss was the Blue Hen defense and rebounding ability. They forced their opponent into 22 turnovers, only allowed one 3-pointer and grabbed 17 offensive rebounds.

Delaware’s next test will come in-conference on Jan. 2 at the College of Charleston, Coach Adair’s former team. The Blue Hens next home matchup will come a week later on Jan. 9, versus William & Mary.