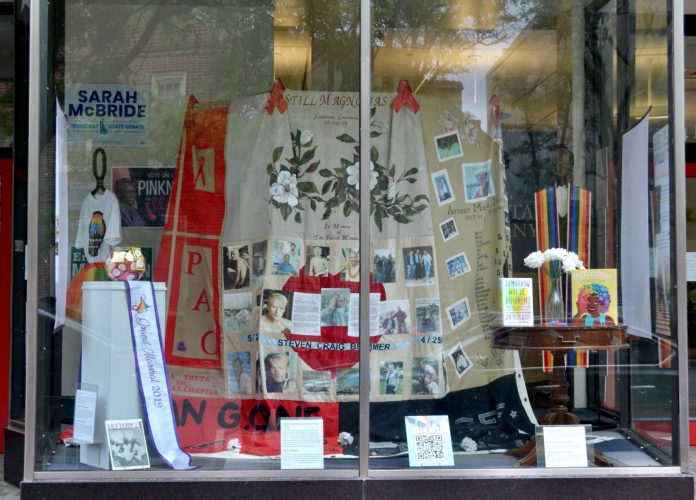 The Delaware History Museum recently introduced a new exhibit focused on LGBTQ history in Delaware. The exhibit, titled “Existence is Resistance,” features photos and other artifacts from the past 50 years celebrating the history of queer communities in the state.

The exhibit was curated by Kristin Mikles, a researcher with the Delaware Historical Society, and university alumna Carolanne Deal, who serves as an interpreter at the Delaware History Museum. Together, the two traveled up and down the state, interviewing queer Delawareans in addition to collecting objects and photographs for the display.

Deal also conducted research at the University of Delaware Archives on LGBTQ student organizations on campus and discovered the history of the university’s Gay Student Union (GSU). UD GSU became a registered student organization in 1972, making it one of the oldest LGBTQ college groups in the nation. Now known as the Lavender Programming Board, the GSU hosted weekly meetings, seasonal social events and a variety of educational speakers in an effort to create an inclusive community for LGBTQ students on campus.

Another corner of the display includes books authored by prominent transgender Delawareans. “Tomorrow Will Be Different” was written by Delaware Sen. Sarah McBride. The first openly transgender state senator in the country, McBride is currently the highest-ranking transgender elected official in United States history. Her memoir takes readers through a personal journey of love and loss and follows McBride as she grapples with issues facing transgender people across the nation.

“My Rainbow” is a children’s book that follows a mother as she creates the perfect rainbow-colored wig for her transgender daughter based on the real-life experience of authors and mother-daughter activist duo Trinity and DeShanna Neal.

The white carnations found between the two novels represent a long-standing tradition from the annual AIDS Walk Delaware. The goal of AIDS Walk Delaware is to reduce the stigma of HIV, raise awareness and provide HIV-informed community health and education to all Delawareans. Since 1987, participants in their annual walk have received white carnations to drop in the Brandywine River to honor and remember those who have died from AIDS.

The “Existence is Resistance” exhibit will be on display at the Delaware History Museum throughout the summer.