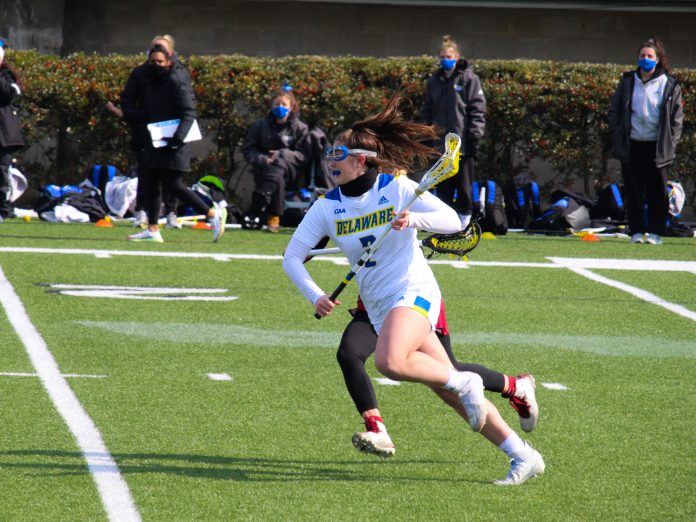 Delaware’s women’s lacrosse team canceled the remainder of its 2021 season after athletes hosted an off-campus gathering in mid-March, according to a statement released by the university’s athletic department on Wednesday.

According to the statement, an indoor gathering took place on March 21 that violated the city of Newark’s indoor gathering ordinance, which remains capped at no more than 10 people inside a private residence.

The team is set to face a six-week suspension with the Blue Hens last six games now canceled. Delaware originally postponed its March 27 home matchup against Towson due to COVID-19 protocols within its program.

The Blue Hens last game came on March 21 in a 14-7 loss to Coastal Carolina. Delaware finished its season with a record of 1-5 with its only win against Delaware State on Feb. 24.

“The health, safety, and well-being of our student-athletes and campus community are a priority at Delaware,” Athletic Director Chrissi Rawak said in the statement. “We have spoken to our student-athletes at length about the protocols and guidelines that must be followed for us to provide a safe environment not only for the University but our community as well. We will continue to communicate with our student-athletes how important it is for them to honor the social pledge and stay disciplined in their choices.”

In September of 2020, the university announced strict guidelines related to social gatherings with hosts facing emergency suspension and with attendees having the possibility to face deferred suspension, suspension or expulsion, according to a UDaily release on Sept. 17.

In total, over 450 students have been referred to the Office of Student Conduct with varying levels of disciplinary action for gatherings exceeding Newark’s ordinance and other COVID-19 violations.

All University of Delaware students age 16 and older will be eligible to receive a COVID-19 vaccine starting Tuesday, April 6.