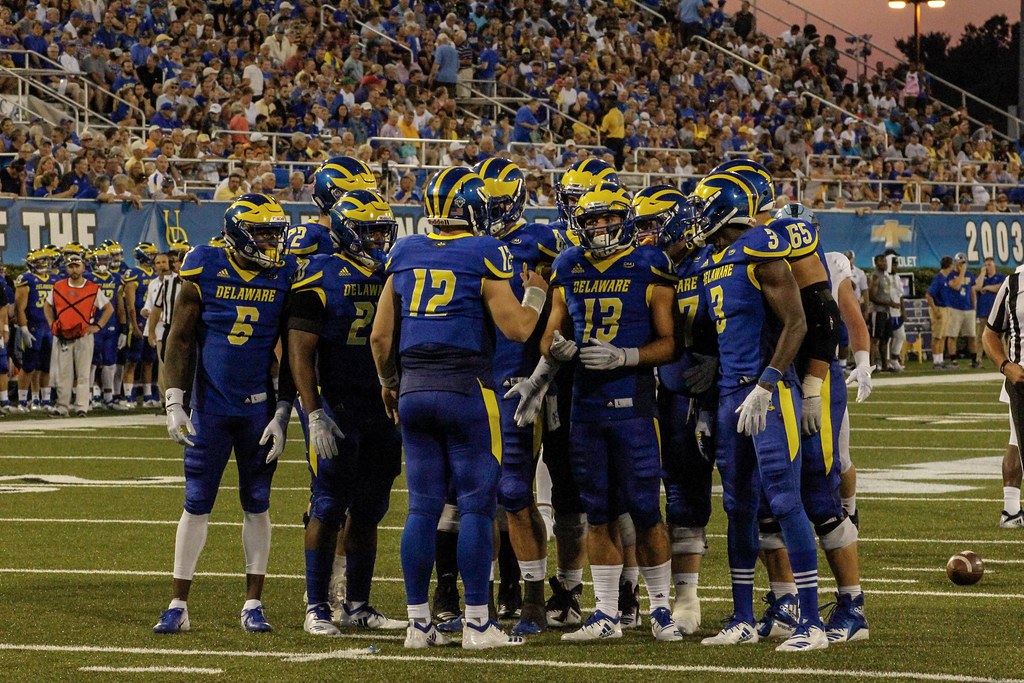 Courtesy of Delaware Athletics
Delaware travels to Bridgeforth Stadium to take on James Madison University in the first round of the FCS playoffs.

Delaware fell to Villanova for the twelfth time in the last 13 years to finish the regular season 7-4 overall and 5-3 in CAA play. The odds worked out in the Blue Hens’ favor, despite the loss. They will make their first FCS playoff appearance since 2010 against James Madison Saturday at 3 p.m.

Although the Villanova game was plagued with injuries and unanticipated situations, all adversity aside, the Blue Hens still didn’t come out and play their best against a major rival team. Not exclusive to the Villanova game, Delaware will have to perform stronger than ever in its playoff debut, against a James Madison program that has reached the national championship game in each of the last two seasons.

Below are three areas for the Blue Hens to improve heading into today’s first-round playoff game against JMU.

Delaware’s defense is not typically a shortcoming for the Blue Hens. In fact, one could go as far to say that much of their success this past season has come from its veteran defense. However, in the game against Villanova the defense just did not have an answer.

“I never really felt like we were able to get stops when we needed to get stops,” Head Coach Danny Rocco said. “For all the things that may have happened out there today, that’s probably the most disappointing, maybe even disturbing.”

Delaware gave up over 400 yards in five of its last eight games, including its two most recent losses against Stony Brook and Villanova.

This season, Delaware has allowed 354.8 yards per game which is its most in four years, as well as more than last season’s mark of 305.5.

Against Villanova, stops weren’t being made and corners of the field were left wide open for Villanova’s receivers. It was somewhat of a free-for-all and a performance that won’t be enough to get a win or even put up a fight against a more talented JMU offense.

Quarterback has been a question mark around Delaware football for several years, but was finally falling into place this season with Pat Kehoe behind the center.

When Kehoe was taken out late in the first quarter against Villanova after suffering a blow resulting in concussion symptoms, redshirt freshman Nolan Henderson took his spot. Then last year’s late-season starter J.P. Caruso stepped in briefly after Henderson took a hard hit, though Henderson eventually finished out the rest of the game.

Kehoe, Henderson and Caruso were all sidelined at Delaware’s practices on Tuesday according to the News Journal’s Kevin Tresolini leaving wide receiver Joe Walker and freshman Anthony Paoletti as the other options at quarterback

Henderson’s biggest play of the game was a 43-yard pass to Walker in the third quarter earning him his first collegiate touchdown pass, but that was about the most momentum the Blue Hens saw that day offensively.

In the press conference after the Villanova game, Rocco said that Villanova had “balance on offense.” A balance that Delaware couldn’t seem to find with injuries plaguing them and constant adjustments being made. Should Delaware’s three starting options — Kehoe, Henderson and Caruso — not be able to play against JMU, Walker may be the best option as he has game time experience at quarterback, specifically against JMU last season.

With defense not being as stout as it has and can be and major questions among the offense, inconsistent play on special teams can’t fly in a playoff game.

Since that game, Delaware has not seen those back-to-back errors from special teams, but in a high stakes playoff game Delaware cannot leave anything up for question; every point, big or small will matter.

Share
Facebook
Twitter
Pinterest
WhatsApp
Previous articleThe state of East Main Street: Getting together to remember an East Main Street now far gone
Next articleDelaware falls to James Madison in first round of the FCS playoffs

From Italy to New Jersey to Delaware, the 19-year-old Gianmarco Arletti is no stranger to adapting into a new climate.
Read more
Football

As cliché as it may sound, the saying “they need to dominate the line of scrimmage,” might need to be Head Coach Danny Rocco’s motto for Delaware football entering the Spring 2021 season.
Read more
Sports