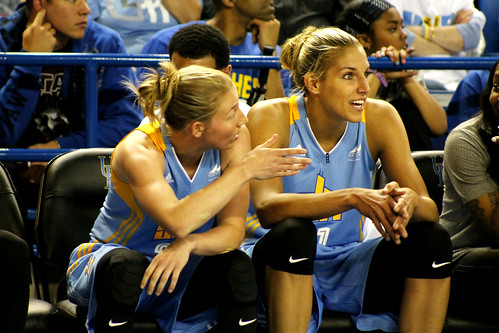 Morgan Browell/THE REVIEW
Judging by Player Efficiency Rating, Delle Donne had the third greatest season in the history of the WNBA in 2015. That stat also raters her 2015 as better than any NBA season ever.

Delaware alumna and reigning WNBA MVP Elena Delle Donne led her team to victory on Sunday as her Chicago Sky defeated the New York Liberty 93-59 in a preseason game at the Bob Carpenter Center.

After being introduced to a standing ovation, Delle Donne found success early on in the game. The Sky dominated the first quarter and continued applying pressure to the Liberty, resulting in an 18-point lead at halftime. Delle Donne ended up with 17 points in only 15 minutes of play.

Adut Bulgak added 17 points and 12 rebounds for the Liberty while shooting 50 percent, and Sugar Rodgers chipped in 10 points, while only shooting 25 percent from the field.

Delle Donne said playing in the Olympics will be a dream come true, and that there’s nothing that will prep her better for the Olympics than playing against what she called “the best players in the world” in the WNBA.

Rookie center Imani Boyette added 10 points and five rebounds to the stat sheet for the Sky. Boyette said her excitement in taking the court with Delle Donne for the first time culminated in her inability to make a layup during warm-ups because of how nervous she was.

“I feel like I’m dreaming,” Boyette said. “Her [Delle Donne] following is amazing, her fans are so great. They even embrace me, and I’m like a nobody.”

Delle Donne credited the university with helping to shape her and to prepare her well for life in the WNBA.

“Delaware is such a tough academic school, so it was really challenging,” Delle Donne said. “I had to learn a lot about time commitment and how to weigh everything out, so it prepared me for the real world. Delaware was incredible for me.”

While thanking the crowd after the game, Delle Donne said she’s forever grateful for her fans back home and that she looks forward to bringing the Sky back to Delaware next year.

“We’re definitely the Chicago Sky, but today, and any other time we’re on the East Coast, we’re the Delaware Sky, too,” Delle Donne said.